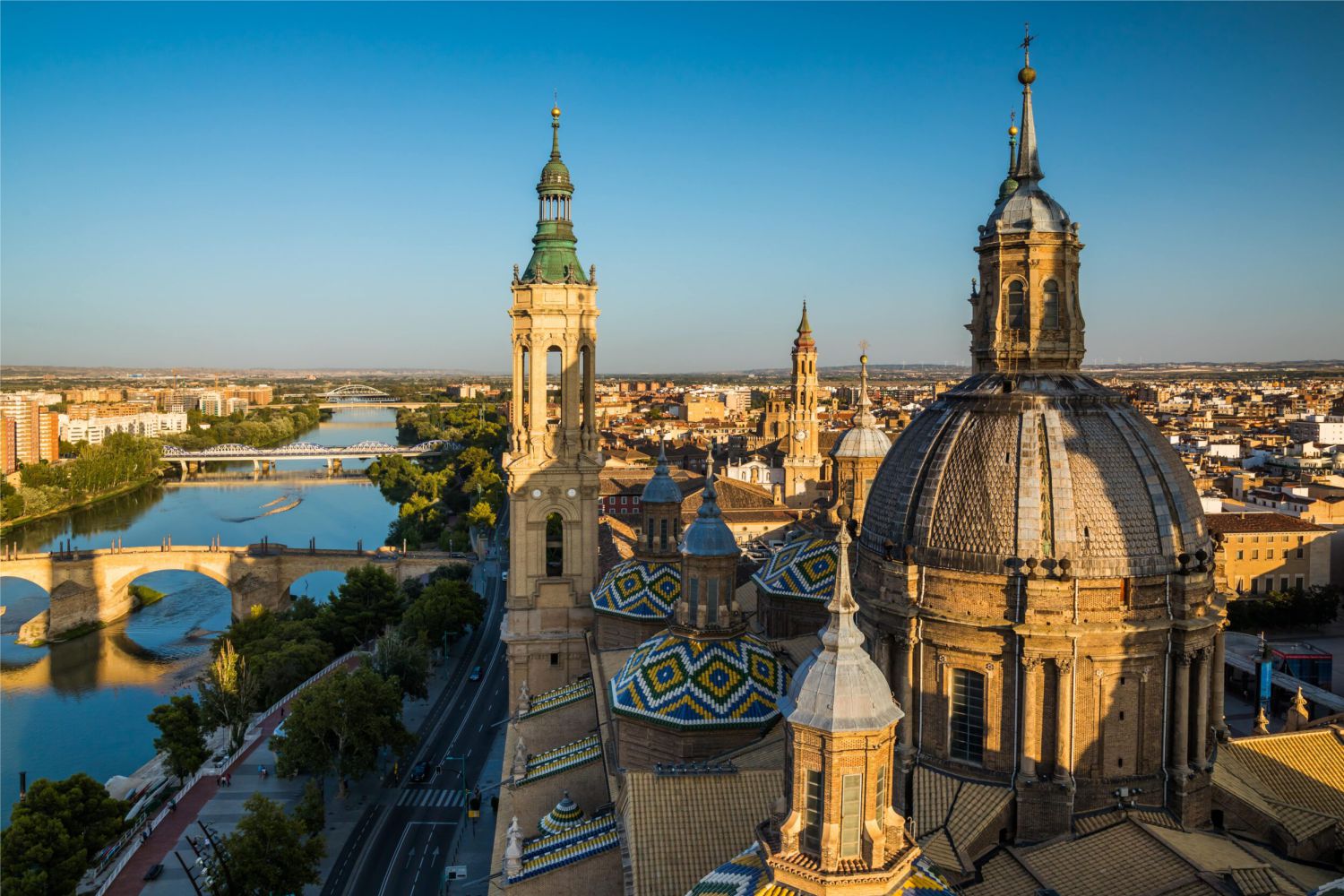 Zaragoza (map) is the capital and largest city of Aragon in Spain.

The city is famous for its folklore, local cuisine, and landmarks such as the Basílica del Pilar (map), La Seo Cathedral (map) and the *Aljafería Palace (map). Together with La Seo and the Aljafería, several other buildings form part of the Mudéjar Architecture of Aragon which is a UNESCO World Heritage Site.

Accommodation is a reason to visit Zaragoza in itself – if you plan to visit both Madrid and Barcelona taking advantage of the fast train connection, you can choose to stay here, halfway between them. And all the attractions of Zaragoza are an added bonus on top of it!

Near the Cathedral-Basilica of Our Lady of the Pillar (map) on the banks of the Ebro are located the city hall, the Lonja (old currency exchange, map), La Seo (Catedral del Salvador de Zaragoza, map). Museum of Tapestries (map) near the Roman ruins of forum and port city wall. >> *List of tourist attractions in Zaragoza

Some distance from the centre of the old city is the Moorish Aljafería Palace (map), the most important Moorish buildings in northern Spain and the setting for Giuseppe Verdi’s opera Il trovatore (The Troubadour).

The churches of San Pablo (map), Santa María Magdalena (map) and San Gil Abad (map) were built in the 14th century, but the towers may be old minarets dating from the 11th century; San Miguel (map); Santiago (San Ildefonso) and the Fecetas monastery are Baroque with Mudéjar ceilings of the 17th century. All the churches are Mudéjar monuments that comprise a World Heritage Site.

Other important sights are the stately houses and palaces in the city, mainly of the 16th century: palaces of the count of Morata (map) or Luna (Audiencia), Deán, Torrero (colegio de Arquitectos), Don Lope or Real Maestranza, count of Sástago, count of Argillo (today the Pablo Gargallo museum), archbishop, etc.

Mercado Central (Lanuza Market, map). On a site which has been a market place since the Middle Ages. It is the perfect place to buy Zaragozan products as well as observe the atmosphere of a traditional Spanish market. Go there if you are looking for food and fresh produce.

RAIL >   Madrid can be reached in 75 minutes, and Barcelona in approximately 90 minutes. The central station is Zaragoza–Delicias railway station (map). The main train operator is RENFE, including AVE (Spanish high speed train) or Talgo intercity services. (*Rail travel in Europe)

AIRPORTS >   Zaragoza Airport is located in the Garrapinillos neighbourhood, 10 kilometres from the city centre. Information about Spanish airports > aena.es.