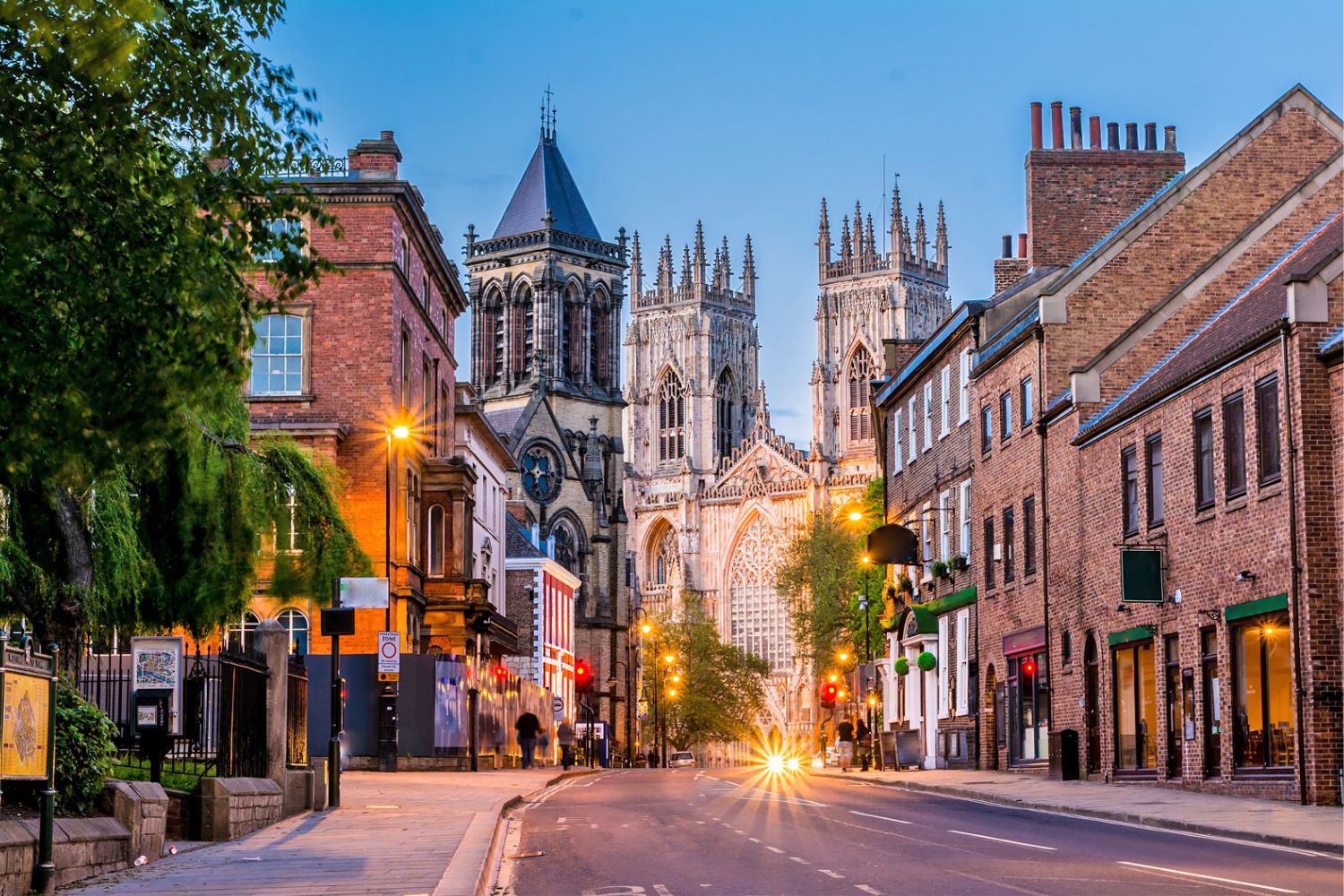 The ancient cathedral city of York (map) has a history dating back over 2000 years. It is the historic county town of Yorkshire. The city was founded by the Romans as Eboracum in 71 AD.

With the emergence of tourism, the historic core of York became one of the city’s major assets, and in 1968 it was designated a conservation area.

Romans, Saxons, Vikings, and Britons from all eras have each left their mark. It is home to some of Europe’s best-preserved historical buildings and structures, including York Minster (map) and dozens of other churches, the Shambles (map) medieval shopping street, countless handsome townhouses.

Despite its size, York packs in more history and culture than many much larger places, and is a fascinating and beautiful destination any time of year.

Aside standout attractions, the joy of York is in wandering the ancient streets and coming across surprising buildings and beautiful views all by yourself.

York’s centre (map) is enclosed by the city’s medieval walls (map), which are a popular walk. These defences are the most complete in England. They have the only walls set on high ramparts and they retain all their principal gateways.

+ York Pass is a sightseeing card which gives visitors free entry to top attractions, museums and monuments in York.

A feature of central York is the *Snickelways, narrow pedestrian routes, many of which led towards the former market-places in Pavement (map) and St Sampson’s Square (map). The *Shambles (map) is a narrow medieval street, lined with shops, boutiques and tea rooms. Its unusual name comes from an old English term for an open-air slaughterhouse or meat market.

York Minster (Cathedral of St Peter in York, map). The largest Gothic cathedral in northern Europe, York Minster dominates the skyline and dates back to the 8th century at least. The inside of the cathedral has beautiful stained glass and several interesting and peculiar features – look for the modern statues signalling “Christ is here” in semaphore and the dragon hanging from near the ceiling.

Jorvik Viking Centre (map). Reconstruction of York as it might have looked 1000+ years ago. The visit takes the form of a sit-down ride as you experience the sights, sounds, smells and diverse languages and faces of everyday 10th century life, with the aid of animatronics, dioramas and touchscreen technology.

Clifford’s Tower (map). In the 11th century, the Normans built a castle here to keep the Vikings at bay and subdue the local population following their conquest of England. The Vikings being Vikings, they promptly smashed it, so the Normans built bigger and better – the tower you see today was the castle’s keep.

Fairfax House (map). A Georgian townhouse built as the winter home for the Viscount Fairfax and his daughter, which has today been lovingly restored as a charming example of aristocratic life in York.

Guildhall (map). Built in the 15th century as a meeting hall for the guilds of York, the Guildhall is now also home to the city council chamber.

York Mansion House (map). The grand official residence of the Lord Mayor of York, dating from 1732, holds an unparalleled collection of civic gold and silver, plus extensive items of furniture, ceramics, glassware and art.

York Art Gallery (map). A public art gallery with a collection of paintings, prints, watercolours, drawings and ceramics from the 14th century to the contemporary era.

York Castle Museum (map). Outstanding museum of everyday life with exhibits to appeal to all ages. Highlights are Kirkgate, a recreated Victorian street, and Half Moon Court, an Edwardian street.

St Mary’s Church (map, not to be confused with St Mary’s Abbey). A Saxon church, though most of the current building dates from the 13th century. Its 47 m steeple is the tallest in York and it has some fine stained-glass windows.

In June 2015 York CAMRA listed 101 pubs on its map of the city centre, some of which are hundreds of years old. These include the Golden Fleece (map), Ye Olde Starre Inne (map), noted for its sign which has spanned the street since 1733, and The Kings Arms (map), often photographed during floods.

On 18 June 2016, York CAMRA undertook a “Beer Census” and found 328 unique real ales being served in over 200 pubs in York, reinforcing the city’s reputation as a top UK beer destination.

i-Travel York – provides unbiased information for travelling around the city on foot, by bike, by bus and by car.

RAIL >   London North Eastern Railway (LNER) – There’s no quicker way to get to the heart of historic York with train journeys less than two hours from London King’s Cross. + Getting to York is easy with cheap train tickets from TransPennine Express.