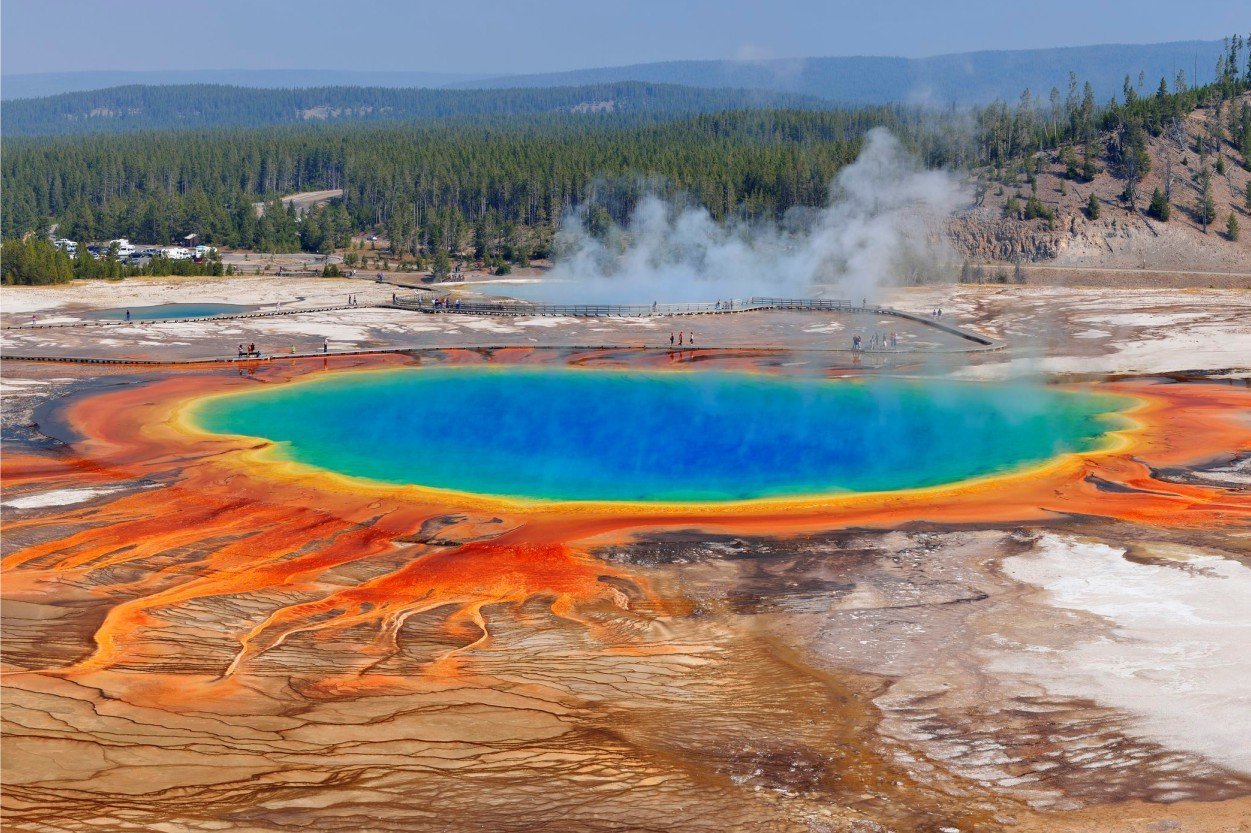 Yellowstone National Park (map) is a United States National Park and a UNESCO World Heritage Site. It was the world’s first national park, set aside in 1872 to preserve the vast number of geysers, hot springs, and other thermal areas, as well as to protect the incredible wildlife and rugged beauty of the area.

With half of the earth’s geothermal features, Yellowstone holds the planet’s most diverse and intact collection of geysers, hot springs, mudpots, and fumaroles. Its more than 300 geysers make up two thirds of all those found on earth. Combine this with more than 10,000 thermal features comprised of brilliantly colored hot springs, bubbling mudpots, and steaming fumaroles, and you have a place like no other.

The weather in Yellowstone National Park can change very rapidly from sunny and warm to cold and rainy, so it’s important to bring along extra layers of clothing which can be used as needed. Snow can fall in Yellowstone at any time of the year.

+ Camp in the Backcountry

The park can be sub-divided into approximately eight major areas, which are organized below as they would be encountered by someone traveling the park in a clockwise direction, starting from the east.

Bridge Bay, Fishing Bridge & Lake. These three regions are situated on the north side of Yellowstone Lake. Recreation options include boating, fishing, and a handful of thermal features.

West Thumb & Grant Village. These two villages are on the western side of Yellowstone Lake and offer boating, fishing, and some interesting thermal features, including the “Fishing Cone”, a hot springs that bubbles out directly into the lake.

Old Faithful (map). Old Faithful is the image people think of when they think of Yellowstone, and the geyser erupts regularly (check the visitor center for estimated eruption times). This area is also home to the iconic and historic Old Faithful Inn, as well as a vast number of geysers and hot springs that are easily accessible via boardwalks.

• Upper Geyser Basin. Yellowstone, as a whole, possesses close to sixty percent of the world’s geysers, and the Upper Geyser Basin is home to the largest numbers of this fragile feature found in the park, including the iconic “Old Faithful” geyser. Old Faithful, the world’s most famous geyser, has large eruptions occurring an average of about once every eighty minutes, although the timing between each eruption varies by as much as an hour and has been increasing over the years.

• Lower Geyser Basin. This large area of hydrothermal activity can be viewed by foot along the boardwalk trail at Fountain Paint Pots and by car along the 3-mile (4.8 km) Firehole Lake Drive. The latter is a one-way drive where you will find the sixth geyser predicted by the Old Faithful staff: Great Fountain.

Madison is midway between Old Faithful and the Norris Geyser basin and offers an array of thermal features.

Norris. South of Mammoth, the Norris area is a home to a vast array of thermal features, including Steamboat Geyser (map), the world’s largest. The area was named after Philetus W. Norris, the second superintendent of Yellowstone, who provided the first detailed information about the thermal features.

Mammoth (map) is home to the park headquarters and the impressive calcite terraces of Mammoth Hot Springs. This area has numerous services and is a surprisingly good place to see elk grazing on the manicured lawns surrounding the park administrative buildings.

Canyon (map). The Canyon village is named after the Grand Canyon of the Yellowstone and offers access to this impressive natural landscape. Recreational opportunities include hiking and wildlife viewing – the Hayden Valley area is probably the best place in the park for seeing bison.

There is no public transport in the park. Xanterra Resorts – bus tours during the summer season

AIRPORTS >   The principal airport serving Yellowstone is Jackson Hole Airport, in Grand Teton National Park, near Jackson, and the largest airport in Wyoming. Salt Lake City International Airport (Utah). A bit of a long drive (~6 hours) away, but still the closest major airport to the park, with flights from major cities throughout the country, as well as limited international flights. Flight Delay Information — Air Traffic Control System Command Center.