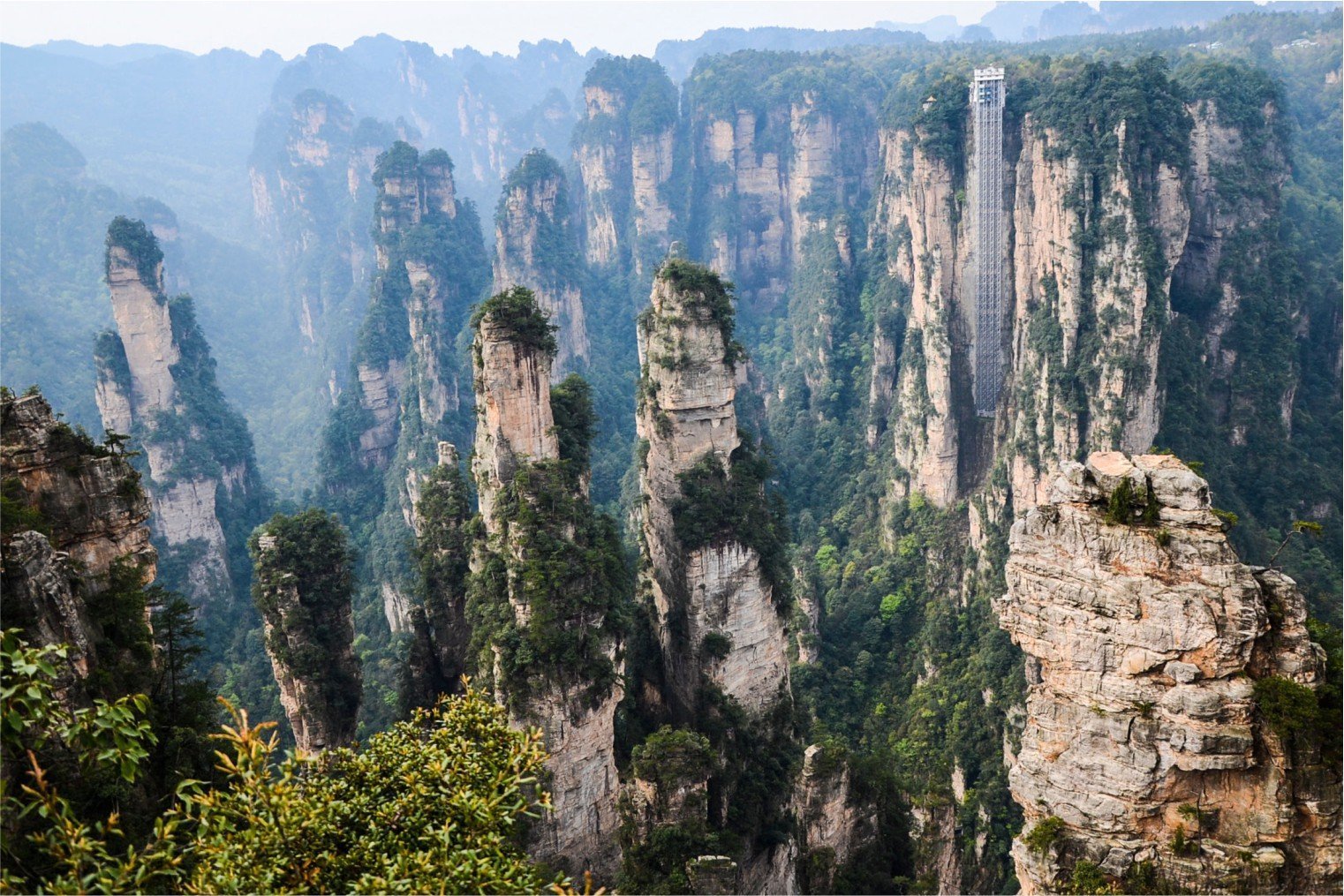 The park is often covered in fog, adding to the mystery but obscuring views. The mountains in director James Cameron’s movie, Avatar, may have been inspired by the scenery here. Park officials have renamed one of the peaks “Avatar Hallelujah Mountain” (阿凡达-哈利路亚山). Wulingyuan was named a UNESCO World Heritage Site in 1992.

How to Plan a Tour of Zhangjiajie

The site is situated in Zhangjiajie City (map) and lies about 270 kilometres (170 mi) to the northwest of Changsha, the capital of Hunan Province. The park covers an area of 690 square kilometers (266 square miles).

The park is enormous and there is no way you can see it all, even in two days, so plan ahead and know which areas you want to visit. The signage in the park is not always adequate, so buy a map from a vendor in the village before you go in (some maps are in both Chinese and English).

Keep in mind that every part of the park has stunning terrain. While many particular locations in the park have been given fanciful names which are marked on maps, if you miss any particular rock feature you can still get the park experience from similar features located elsewhere.

A bus from Zhangjiajie city is a cheaper option. Buses run every 10 minutes or so from the Zhangjiajie central bus station (张家界中心汽车站, just beside the train station, about 3 km east of the airport) to two locations:

Travel time is 45-60 minutes. These routes do not have numbers – arrive in the bus station, go out to the outdoor platforms on the left, and ask for the route.

There are three cable cars in the park – Yuangjiajie (in the west), Huangshizai (in the south), and Tianzi Mountain (in the east). Many other roads go across the park, and many hiking trails go in between those. There is also a scenic glass elevator (hundreds of meters high), and a “mini train”. All of them cost extra in the range of ¥80-90 (April 2017) one way.

The main highlight is following the many paths through the stunning sandstone landscape. Some paths are short and easy, while others are long and involve hundreds of meters of exhausting climbing. The main sights are easily reachable from the bus stops but walkways will be clogged with tourist. As soon as you venture out to a ‘minor’ track, you’ll be alone.

Zhangjiajie National Park can be visited all year round. But when is it best to go? It depends on the experience you’re looking for.

For weather, September and October are the best times to go, when the weather is clear and comfortable.

The national park is busy year-round except for winter from December to February. The peak season is from May to October.

Warning: The restaurants inside Zhangjiajie National Forest Park may present menus printed with ridiculous tourist prices (for example, ¥388 for a whole chicken dish). It’s better to save your appetite (and money) for the string of restaurants located outside the park entrance.