Valley of the Gods. Utah 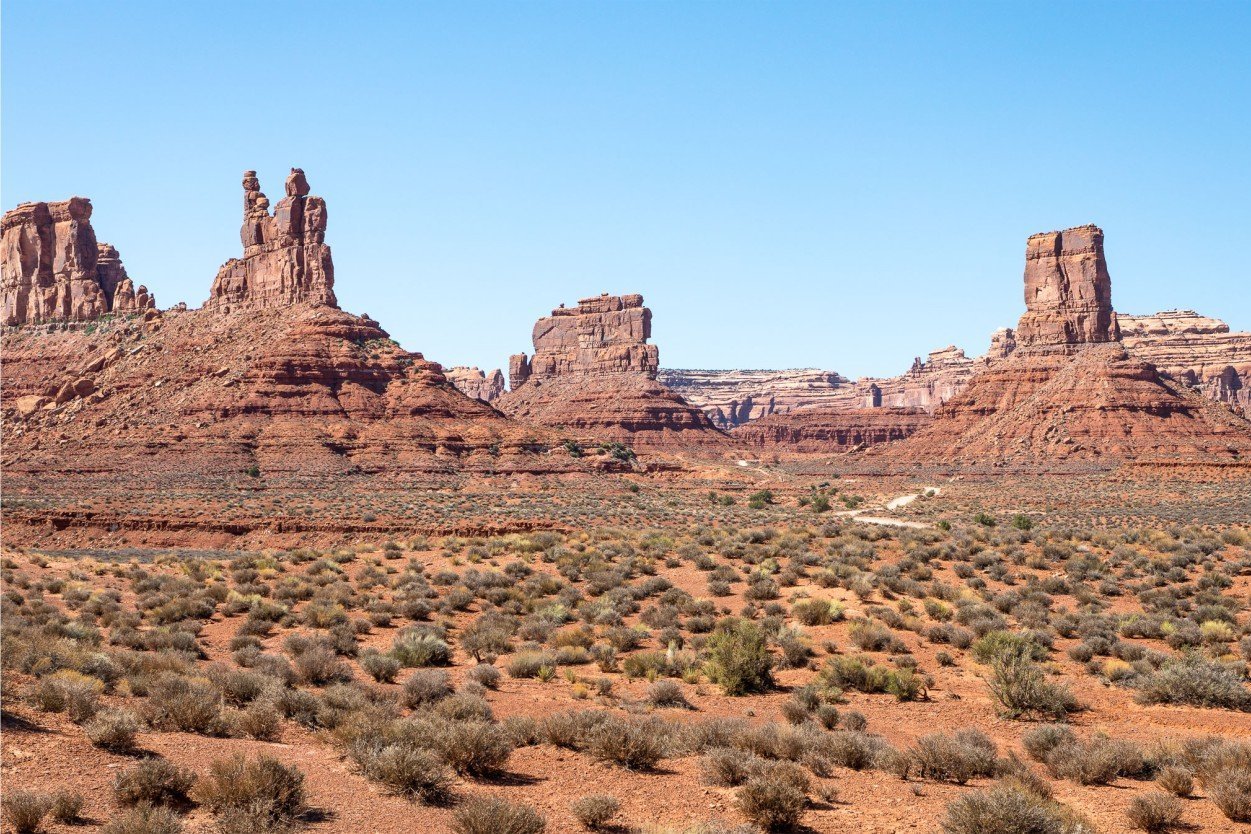 The Valley of the Gods (map) is a scenic sandstone valley near Mexican Hat (map) in San Juan County, southeastern Utah.

Valley of the Gods is located north of Monument Valley across the San Juan River and has rock formations similar to those in Monument Valley with tall, reddish brown mesas, buttes, towers and mushroom rocks, remnants of an ancient landscape.

The valley is public land managed by the Bureau of Land Management. No entrance fee is charged and no services are provided in the valley. Dispersed camping is permitted at previously disturbed sites, though campfires are not allowed.

The Valley of the Gods may be toured via a 17-mile (27 km) gravel road (San Juan County Road 242) that winds around the formations. The road is rather steep and bumpy in parts but is passable by non-four-wheel drive vehicles in dry weather.

The western end joins Utah State Route 261 shortly before its 1,200-foot (370 m) ascent up Cedar Mesa (map) at Moki Dugway (map), while the eastern end starts nine miles (14 km) from the town of Mexican Hat along U.S. Route 163 and heads north, initially crossing flat, open land and following the course of Lime Creek (map), a seasonal wash, before turning west toward the buttes and pinnacles.

September and early October is usually the best time to enjoy Utah, especially the mountains, with milder temperatures than summer, less chance of violent thunderstorms, and little chance of snow in the mountains.

In addition, significant snowpack can linger in the mountains through May, while by early Autumn, summer has melted all of the snow, and snowstorms are rare. The national parks of Utah can get very crowded during Summer but predictably become less crowded towards late Summer and into Fall.

Finally, Fall colors are spectacular in the mountains of Utah, and reach their peak in September. Colors in the valley peak in mid-October but aren’t especially spectacular. The gorgeous Fall colors in the mountains rival the famous colors of New England, and are sometimes accompanied by early snow, creating a unique and beautiful mixture of vibrant colors and soft white.

rideuta.com – transportation of the state of Utah.