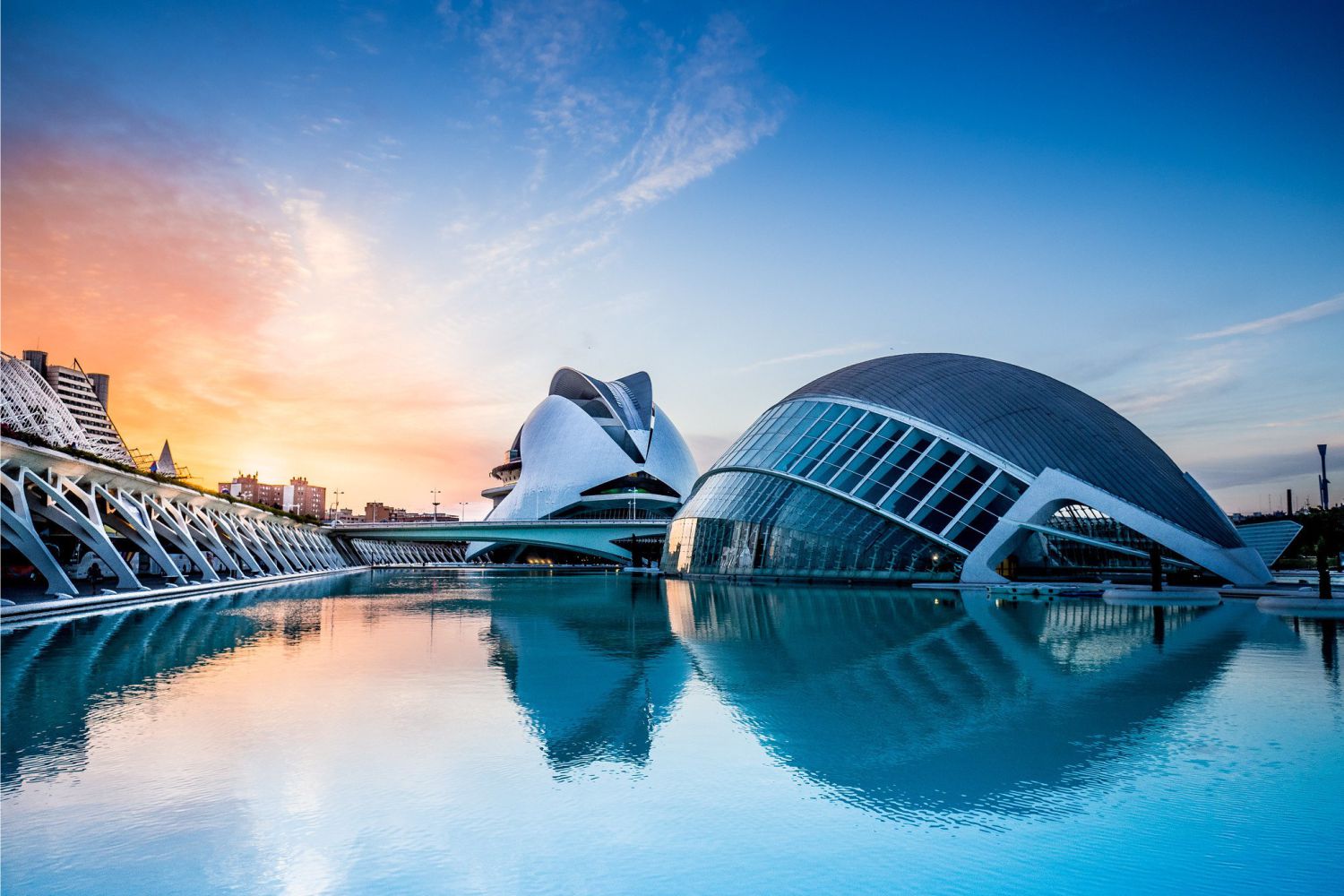 Valencia (map) is a charming old city and the capital of the Valencian Community, and the third-largest city in Spain after Madrid and Barcelona.

Valencia was founded as a Roman colony by the consul Decimus Junius Brutus Callaicus in 138 BC. Valencia was the capital of Spain when Joseph Bonaparte moved the Court there in the summer of 1812. It also served as the capital between 1936 and 1937, during the Second Spanish Republic.

In March visitors flock to the city for the annual UNESCO-listed Falles celebration, but the city is worth visiting at other times of year for its paella, ultramodern architecture, and good beaches.

El Carme (El Carmen, map). In the old centre, it is the perfect place for a stroll where you can witness the transition from a forgotten area to an up-and-coming diverse neighbourhood. Barrio del Carmen is a major nightlife destination in Valencia.

El Cabanyal (Cabañal, map). Established in the 13th century as a fishing village, in the 19th century the town became known as a beach getaway before being annexed by Valencia in 1897. Along with easy access to the beach, it has many charming historic tiled buildings and great bars and restaurants, and is the setting of the annual Semana Santa Marinera.

Russafa (Ruzafa, map). Ruzafa (from Arabic رصافة – rusafa, or ‘garden’) was first established in the 9th century as a Moorish pleasure garden, and evolved into a farming community. It was independent until 1877, when it was annexed by the city. Today the barrio is known for its cultural diversity, hipster shops and cafés, great restaurants, and vibrant nightlife.

Benimaclet (map). Benimaclet (from Arabic بني مخلد – bani mahlad, or ‘sons of Majlad’) began as an Arabic farmstead, and was an independent farming community until 1878. Preserved are its central square and parish church, and charming pedestrian alleys.

Ciutat de les Arts i les Ciències (Ciudad de las Artes y las Ciencias / City of Arts and Science, map). This ultra-modern architectural complex on the former Turia riverbed was designed by Valencian architect Santiago Calatrava and Spanish-Mexican architect Félix Candela. If you don’t want to pay the steep admission charges to the individual sights, you can wander around the complex and appreciate the architecture from outside for free.

L’Oceanogràfic (map). Hours vary by season, open daily . The largest oceanarium in Europe, and the second-largest in the world, has seven sections devoted to different ecological zones.

Catedral de Santa María de València (La Seu / Valencia Cathedral, map). It was the site of a Roman temple, then a Visigothic cathedral, and then a Moorish grand mosque. It is now the seat of the archbishropic of Valencia.

Micalet (El Miguelete, map). The unusual octagonal bell tower, with a height of 51 m, was built in the 14th and 15th centuries. It provides a pleasing view of the city.

Llotja de la Seda (La Lonja de la Seda / Silk Exchange, map). This UNESCO landmark is considered to be one of the most significant secular Gothic buildings in Europe. It was built between 1482 and 1533 on the site of an earlier oil exchange.

Església de Sant Nicolau (Iglesia de San Nicolás / Church of San Nicolás, map). Established in the 13th century, the church was expanded in several phases, culminating in the current 15th-century Gothic structure. During the late 17th century extensive Baroque renovations were carried out to the interior, the most significant of them being ceiling frescoes.

Monestir de Sant Miquel dels Reis (Biblioteca Valenciana Nicolau Primitiu / Monastery of San Miguel de los Reyes, map). Founded in the 16th century, this massive Renaissance building is considered by some historians to be the early model for the more well-known El Escorial near Madrid. In 1835 the monastery was dissolved and came under control of the state.

Banys de l’Almirall (Baños del Almirante / Almirante Muslim Baths, map). Although constructed in 1313 after the Christian reconquista, the bathhouse was built in the Arabic style and is considered to be an excellent example of Moorish architecture.

Museu d’Història de València (Museo de Historia de Valencia / Museum of Valencian History, map). Housed in a former reservoir, this well-designed museum is dedicated to the developmental history of the city, from the Roman era until the present.

Museu Nacional de Ceràmica (Museo Nacional de Cerámica / National Ceramics Museum, map). The ground and first floors showcase a collection of stagecoaches and period furniture, while the upper two floors house an extensive ceramics collection with a focus on historic Valencian pieces. Of particular note are Moorish ceramic tiles from the main mosque which was on the site now occupied by the cathedral, and six plates designed by Picasso.

Mercat Central (Mercado Central / Central Market, map). In a restored modernist iron and glass building dating from 1928, this is one of the largest markets in Europe.

Mercat del Cabanyal (Mercado del Cabañal / Cabanyal Market, map). Traditionally one of the better markets in the city for fish, this also has fresh produce and artisanal products.

El Rastro (Flea market, map). Su 08:00-13:30. Valencia’s enormous second-hand market is a good place to pick up all sorts of odds and ends, ranging from vintage toys to Valencian ceramics to bicycle parts. Vendors are licensed and there is a police presence, but do beware of pickpockets.

AIRPORTS >   Valencia Airport – is in the neighbouring town of Manises, 9 km from the city centre. Metro Valencia lines  3  and  5  go directly to the town centre and link the airport to the main train station, Estación del Norte (map). >> Information about Spanish airports > aena.es.