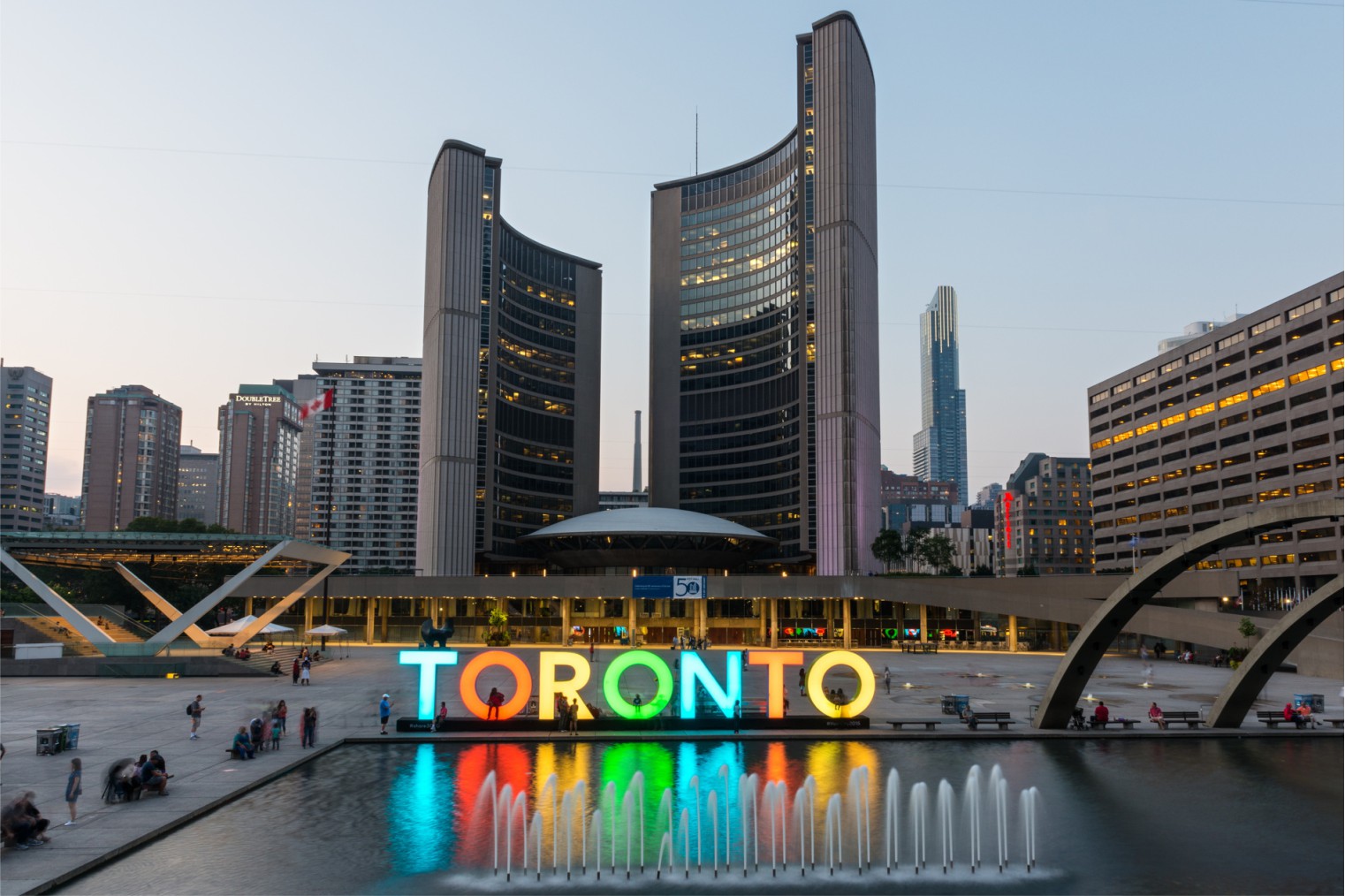 Toronto is one of the most culturally and ethnically diverse cities in the world: more than 80 ethnic communities are represented, and over half of the city’s residents were born outside Canada.

Over 200 distinct ethnic origins are represented among its inhabitants. While the majority of Torontonians speak English as their primary language, over 160 languages are spoken in the city.

Distillery District (map). The former Gooderham & Worts distillery lands have been rejuvenated into a pedestrian-only village dedicated to the arts and entertainment. It has fantastic restaurants, festivals, and art galleries housed in its 19th-century distillery buildings.

Little Italy (map) is the spot to get a sense of the Western Mediterranean. Sit at one of the many coffee shops and watch the world go by on the weekends.

Toronto’s Chinatown (map) is a great way to sample a tiny bit of cities like Hong Kong, without spending the airfare. Vast crowds crush the sidewalks as vendors sell authentic Chinese and Vietnamese food, and not-so-authentic knock-offs. It is one of North America’s largest Chinatowns, and with many shops aimed at tourists, it is a good place to pick up some unusual and inexpensive souvenirs.

Koreatown (map) has many Korean retail businesses and restaurants where Korean is as prominent as English in the signage.

Gerrard India Bazaar (Little India. map) If you want to get a sense of Toronto’s vibrant South Asian community, this is where you want to be; not only is Indian culture represented – visible Pakistani and Afghan communities are also alive along the street.

The city of Toronto consists of many unique and famous museums. The Royal Ontario Museum (map) is Canada’s largest museum of natural history and world cultures. It presents engaging galleries of art, archaeology and natural science from around the world. Art Gallery of Ontario (map) is one of the largest art museums in North America. Its collection of approximately 95,000 works includes many genres from around the world.

Gardiner Museum (map) – The museum’s permanent collection of ceramics includes over 4,000 pieces. The collection is made up of two types of ceramics, earthenware, and porcelain.

The Eaton Centre (map) is Toronto’s most popular tourist attraction with over 52 million visitors annually. The CN Tower (map) is Canada’s National Tower, and it is one of the attractions that is open 364 days a year.

The Canadian National Exhibition (“The Ex”) is held annually at Exhibition Place (map), and is the oldest annual fair in the world.

Food tours (e.g. Tasty Tours), walking tours that guide guests to some of Toronto’s foodie hotspots for samples and a history of the area. These tours usually aim to highlight the variety of cuisines in Toronto, sometimes focusing on the dense food scenes in specific areas (e.g. Kensington Market, map).

St. Lawrence Market (map). Has been bringing the freshest foods into the city for Torontonians and visitors alike since 1901.

CityMapper – Toronto | The ultimate transport app and technology for mobility in cities.

WATERWAYS >   Marine Atlantic provides ferry service between North Sydney, Nova Scotia, and Port-aux-Basques, Newfoundland. There are also ferries to the Îles-de-la-Madeleine from Souris, PEI, and Montreal. BC Ferries has an extensive network of services along the coast of British Columbia and to Vancouver Island and to outlying islands.

Bike Share Toronto provides a public bike system with 1,000 bikes available at 80 stations throughout downtown. By far one of the most popular bike paths is the Martin Goodman Trail, the east-west route that hugs Lake Ontario, spanning the city from Etobicoke to the eastern ends of the city. This path is also often used by pedestrians and rollerbladers.