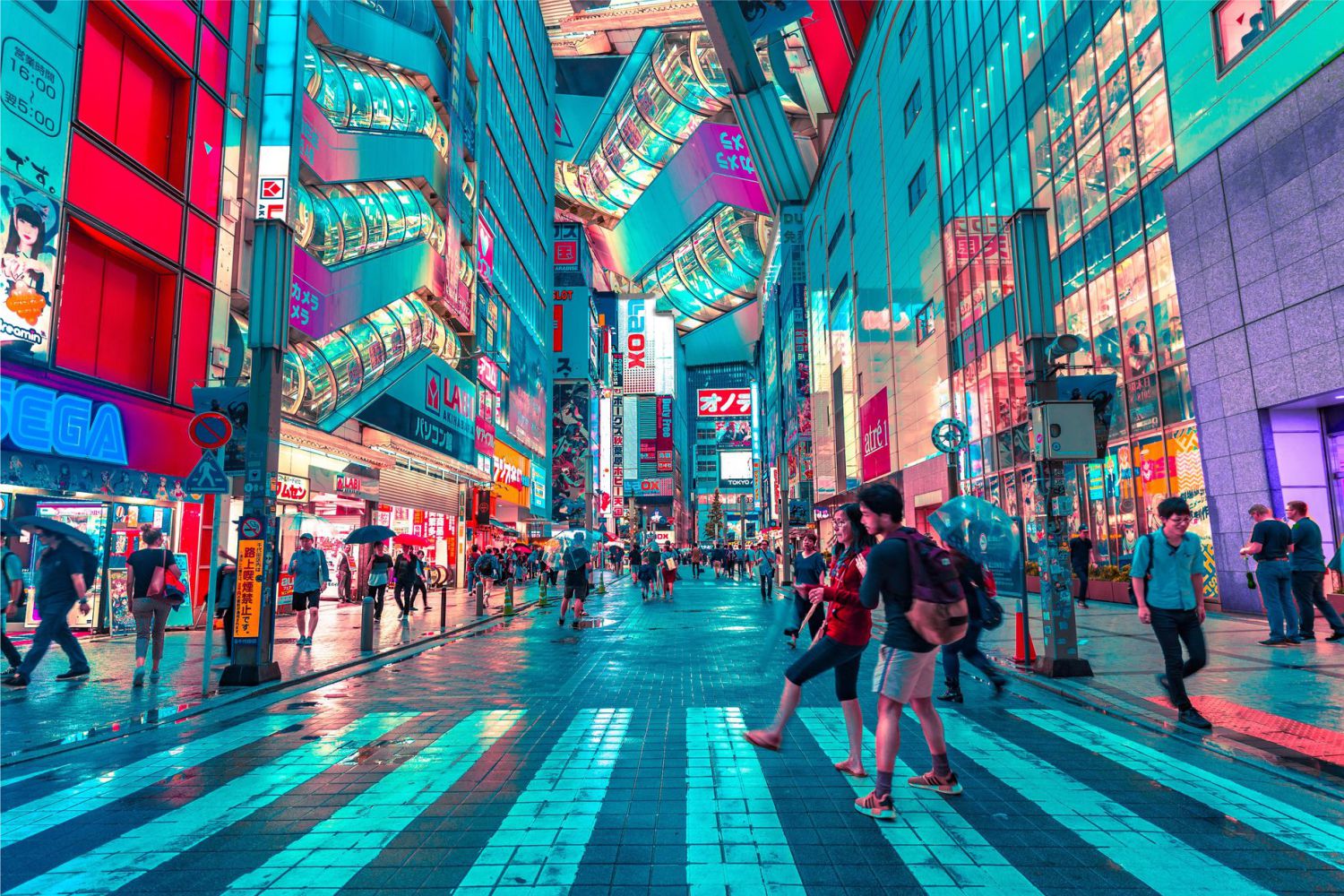 Officially Tokyo Metropolis (東京都) is the capital and most populous prefecture of Japan. The *Greater Tokyo Area is the most populous metropolitan area in the world, with more than 37.393 million residents as of 2020.

Even more strangely, there is no such thing as the “city of Tokyo”. What most people, both foreigners and Japanese, are thinking of when they hear “Tokyo” is the special wards of Tokyo (特別区), sometimes just called the 23 wards (23区).

Originally a fishing village named *Edo, the city became a prominent political center in 1603, when it became the seat of the Tokugawa shogunate.

Tokyo Area Guide • Best things to do • Plan Your Trip

Tokyo is vast: it’s best thought of not as a single city, but a constellation of cities that have grown together. Tokyo’s districts vary wildly by character, from the electronic blare of Akihabara to the Imperial gardens and shrines of Chiyoda, from the hyperactive youth culture mecca of *Shibuya to the pottery shops and temple markets of Asakusa.

If you don’t like what you see, hop on the train and head to the next station, and you will find something entirely different.

For most visitors, the biggest part of the Tokyo experience is just wandering around at random and absorbing the vibe, poking your head into shops selling weird and wonderful things, sampling restaurants where you can’t recognize a single thing on the menu (or on your plate), and finding unexpected oases of calm in the tranquil grounds of a neighbourhood Shinto shrine.

Go to an amusement park such as Tokyo Disney Resort / Park Tickets (map), which consists of Tokyo Disneyland and Tokyo DisneySea.

Serious collectors should head for the Antique Mall in Ginza (map) or the Antique Market in Omotesando (map), which despite the rustic names are collections of small very specialist shops (samurai armor, ukiyo-e prints, etc.) with head-spinning prices. Mere mortals can venture over to Nishi-Ogikubo (map), where you can pick up scrolls of calligraphy and such for a few thousand yen.

The Antique Festival (全国古民具骨董祭り, map) is held over the weekend about 5-6 times a year at the Tokyo Ryutsu Center.

Chiyoda (map) – The seat of Japanese power (both political and economic), the Imperial Palace (map), and the electronics mecca of Akihabara.

Chuo (map) – The famed department stores of Ginza (map) and the outer market of Tsukiji (map).

Minato (map) – The business centers of Akasaka (map) and Shinbashi (map) and the neighbouring nightclub district of Roppongi (map), the artificial island of Odaiba (map), and the skyscrapers of Shiodome (map).

*Shibuya (map) – The fashionable shopping district which also encompasses the teenybopper haven of *Harajuku (map),  home to the Meiji Shrine, map) and the nightlife of Ebisu (map).

Shinagawa (map) – A major train hub (Shinagawa Station, map). Historically, parts of this ward were known as Shimazuyama. Many feudal lords (daimyo) maintained estates in this area during the Tokugawa Shogunate.

Meguro (map) – A residential area with a few nice parks and museums.

*Sumida (map) – It is home to a famous cherry blossom viewing area (along the Sumida River near Asakusa Station, map) in spring. The Edo-Tokyo Museum (map), an excellent and large museum on the history of Tokyo. Tokyo SkyTree (map)

*Taito (map) – The heart of Old Tokyo featuring the temples of Asakusa (map) and National Museums in Ueno (map), as well as some of Tokyo’s cheapest accommodation.

*Bunkyo (map) – Home to Tokyo Dome (map) and the University of Tokyo.

Much of Tokyo’s budget accommodation can be found in the Taito area, especially Asakusa and Ueno. One of the cheapest ways to stay can be also a youth hostel, prices start at ¥1200, e.g. in the Shinjuku area.

CityMapper – Tokyo | The ultimate transport app and technology for mobility in cities.

There are two brands of prepaid fare cards, JR East’s Suica, and PASMO, offered by private (non-JR) lines. Functionally they are completely interchangeable and can be used on just about every subway, train and bus line in Tokyo (with the exception of Shinkansen and limited express trains).