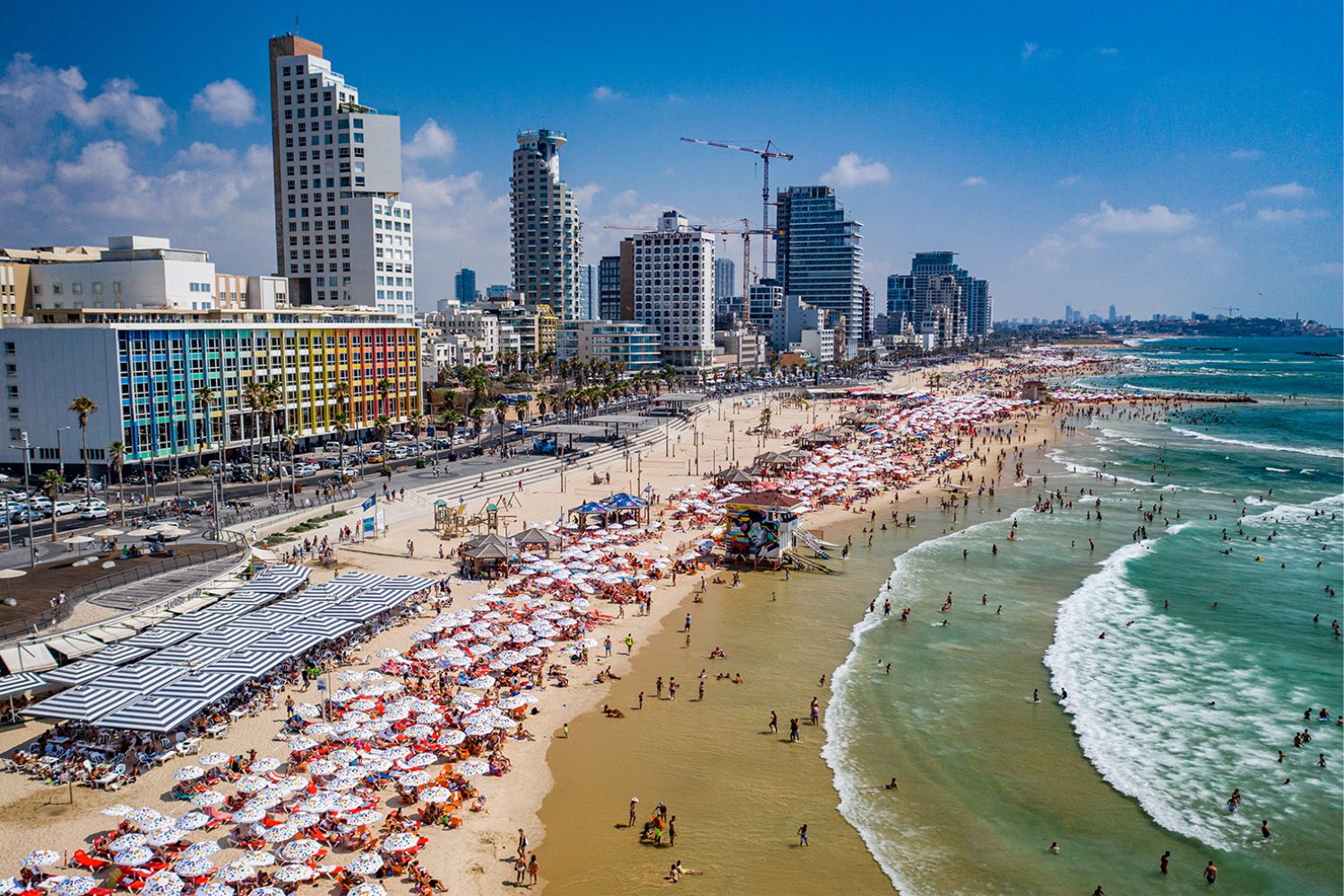 Tel Aviv (map) is the second largest city in Israel (after Jerusalem), and the largest metropolitan area. It is on the Mediterranean coast, about 60 km northwest of Jerusalem and 100 km south of *Haifa. The official name is Tel Aviv-Yafo, and reflects the fact that the city has grown beside (and absorbed) the ancient port city of Yafo (map), to the south of the new city center.

Its booming population, energy, edginess and 24-hour lifestyle give the city a cosmopolitan flair comparable to few other cities in this part of the world. Tel Aviv grew mainly from the south to the north, so the further you go to the north the more you will encounter newer buildings and wealthier communities.

*North Tel Aviv is the wealthiest area of the city (one of the wealthiest areas anywhere in Israel) is north of the Yarkon River. This region is very green, quiet, and suburban compared to the rest of Tel Aviv. The Yarkon Park, Tel Aviv University, and some important museums are here.

*Center (map). This is Tel Aviv as most people know it — containing tourist attractions, hotels, beaches, office buildings, and shopping areas. The center is confined by Yehuda Halevi and HaRakevet streets to the south, the Yarkon River to the north, and Ayalon Highway to the east. This district varies from trendy historic neighborhoods in the south to office skyscrapers in the east and from beachfront hotels in the west to the quiet residential “Old North” neighborhoods in the north.

*Jaffa (Yafo in Hebrew, Yaffa in Arabic, map) is one of the world’s oldest ports, archaeological evidence shows signs of human settlement there starting in roughly 7,500 BC. It was here that the prophet Jonah started the journey that left him in the belly of a fish, Andromeda was saved from a sea monster by Perseus, and Peter the Apostle received a vision marking the split between Judaism and Christianity. Nowadays, Tel Aviv’s Muslim and Christian populations are concentrated in Jaffa. Other than the port, main attractions are the Old City (map) and a flea market (map).

By the time Tel Aviv was founded as a separate city during Ottoman rule of the region, Jaffa had been ruled by the Canaanites, Egyptians, Philistines, Israelites, Assyrians, Babylonians, Persians, Phoenicians, Ptolemies, Seleucids, Hasmoneans, Romans, Byzantines, the early Islamic caliphates, Crusaders, Ayyubids, and Mamluks.

Tel Aviv’s most famous market is the Carmel Market (map), which mostly sells fruit and vegetables, but also candy, clothing, toys, cellphone accessories, kitchen gadgets, and other goods. It is in Tel Aviv Center not far from the beach.

The Levinsky Market (map), not far to the south, is the best place to buy spices, dried fruits, and different kinds of legume. A more upscale option is the Sarona Market (map), which has a variety of luxury foods and restaurants in picturesque surroundings.

Finally, HaTikva Market (map) in the southeast of the city is reputed to be the most “authentic” market, keeping its atmosphere as the other markets have gentrified somewhat.

Since Jan 2019, you can’t pay cash on the bus. You need to buy a Rav-Kav smart card from the driver or Rav-Kav service center.

AIRPORTS >   Ben Gurion International Airport. Israel’s main international airport. 12 km from central Tel Aviv and approximately 40 km from Jerusalem. On Shabbat you will have a hard time reaching or leaving the airport. The airport train station is just below Arrivals in Terminal 3. Direct trains to Tel Aviv take 15-20 min.