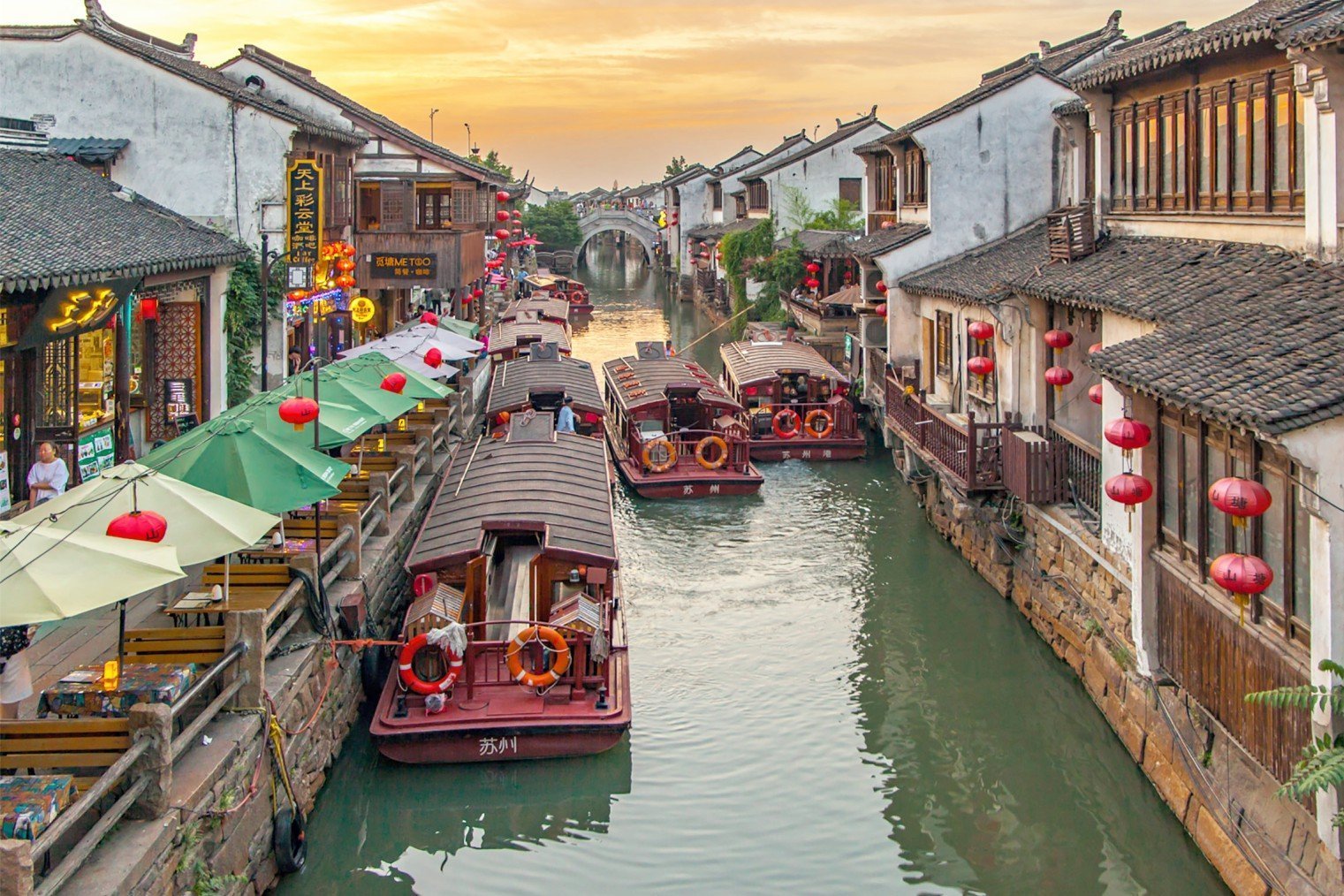 Suzhou (map) is a city in *Jiangsu province, famed for its beautiful gardens and traditional waterside architecture. The town has many canals and has been called the Venice of the East. An older romanization was “Soochow”. Its city center being 100 km (62 mi) west of that of Shanghai – and outer suburbs of the two global hubs meet.

In Imperial China, Suzhou was a popular destination for retired scholars and officials, many of whom built classical Chinese gardens around their homes; even lesser houses and some commercial buildings often have lovely small gardens or courtyards. The Classical Gardens of Suzhou are on the UNESCO World Heritage List.

Founded in 514 BC, Suzhou has had a long and productive history. Local museums host abundant displays of its relics and many sites of historical interest exist. By 100 CE Suzhou was one of the ten largest cities on Earth, and by the early 19th century it was the world’s largest non-capital city.

Heaven has paradise; Earth has Suzhou and Hangzhou
—Chinese proverb

Within the old center, Downtown Suzhou (Canglang, Pingjiang and part of Jinchang district) is completely surrounded by a large, rectangular canal known as the Hucheng River (Hucheng Hé), which is connected to China’s Grand Canal. Most of the major sights are within this area, about 6 by 3 km in size.

!  To make sure you don’t get too lost, ask your hotel concierge to write out the name of your destinations, as well as how to get back. Make sure to add your own notes so you know what the translation is.

Pingjiang Road runs parallel to the Pingjiang River for 1.5 kilometers and is lined with homes and some teahouses. Shantang Street, over twice as long at 3.8 km, is described by the BBC as retaining “the alluring qualities of an old canal-side street: whitewashed buildings are completed by red-tasseled lanterns that swing softly in the breeze, adding to the charm of the river bank”.

Tiger Hill (wiki, map) is known for its natural environment and historical sites. The hill has been a tourist destination for hundreds, if not thousands, of years, as is evident from the poetry and calligraphy carved into rocks on the hill. The Song Dynasty poet, Su Shi said, “It is a lifelong pity if having visited Suzhou you did not visit Tiger Hill.”

Suzhou is famous for its over 60 Classical Gardens, collectively a UNESCO World Heritage Site. The city has the most UNESCO-recognized gardens in the world. (*Classical Gardens of Suzhou)

The Humble Administrator’s Garden (wiki, map) and Lingering Garden (wiki, map) are among the four most famous classical gardens in China. The incredible collection of bonsai trees at the end of the garden furthest from the main entrance is worth a trip all by itself.

The Garden of the Master of the Nets (map). Founded in 1140, and rebuilt in 1770 by the bureaucrat Song Zongyuan. The enclosed complex of house and garden is one of the smallest, most beautiful, and most perfectly proportioned in Suzhou.

Lion Grove Garden (map). Has an incredible collection of pitted, eroded rocks that were greatly appreciated by classical Chinese scholars. It was originally part of a Buddhist monastery.

Hanshan Temple (wiki, map) It is located at the town of Fengqiao (lit. Maple Bridge), about 5 kilometers (3.1 mi) west of Suzhou’s old city. Hanshan Temple is famed in East Asia because of the poem “A Night Mooring by Maple Bridge” (楓橋夜泊), by Tang Dynasty poet, Zhang Ji.

To this day, the poem is still often read in China, Japan and Korea, and is part of the Chinese literature curriculum in both China and Japan. The ringing of the bell at Hanshan Temple on Chinese New Year’s eve is a major pilgrimage and tourism event for visitors from these countries.

Xiyuan Temple (wiki, map) It is located just to the west of Lingering Garden. The temple is known for its statues, Arhat Hall and Free Life Pond, where 2 famous long-life Asian Giant Softshell Turtles lived. One turtle died in 2007 at the age of 400, and the other has disappeared.

Xuanmiao Temple (wiki, map) is a prominent Taoist temple with a long history, located at the center of old Suzhou City. The street along the east-west direction in front of the temple is called Guanqian Street, a famed business pedestrian street.

Lingyanshan Temple (wiki, map) is a prominent Buddhist temple with a 1600-year history, was the palace for Xishi in BC494 located at the peak of Lingyanshan Scenic Area (map).

Shiquan Street (十全街, map) is the main bar area downtown. A number of the bars on this street (not the ones listed above) are thinly-veiled fronts for the world’s oldest profession; numbers of very friendly young ladies sitting around the bar or standing in doorways.

Getting to Suzhou • Transportation in the City (traveltosuzhou.com)