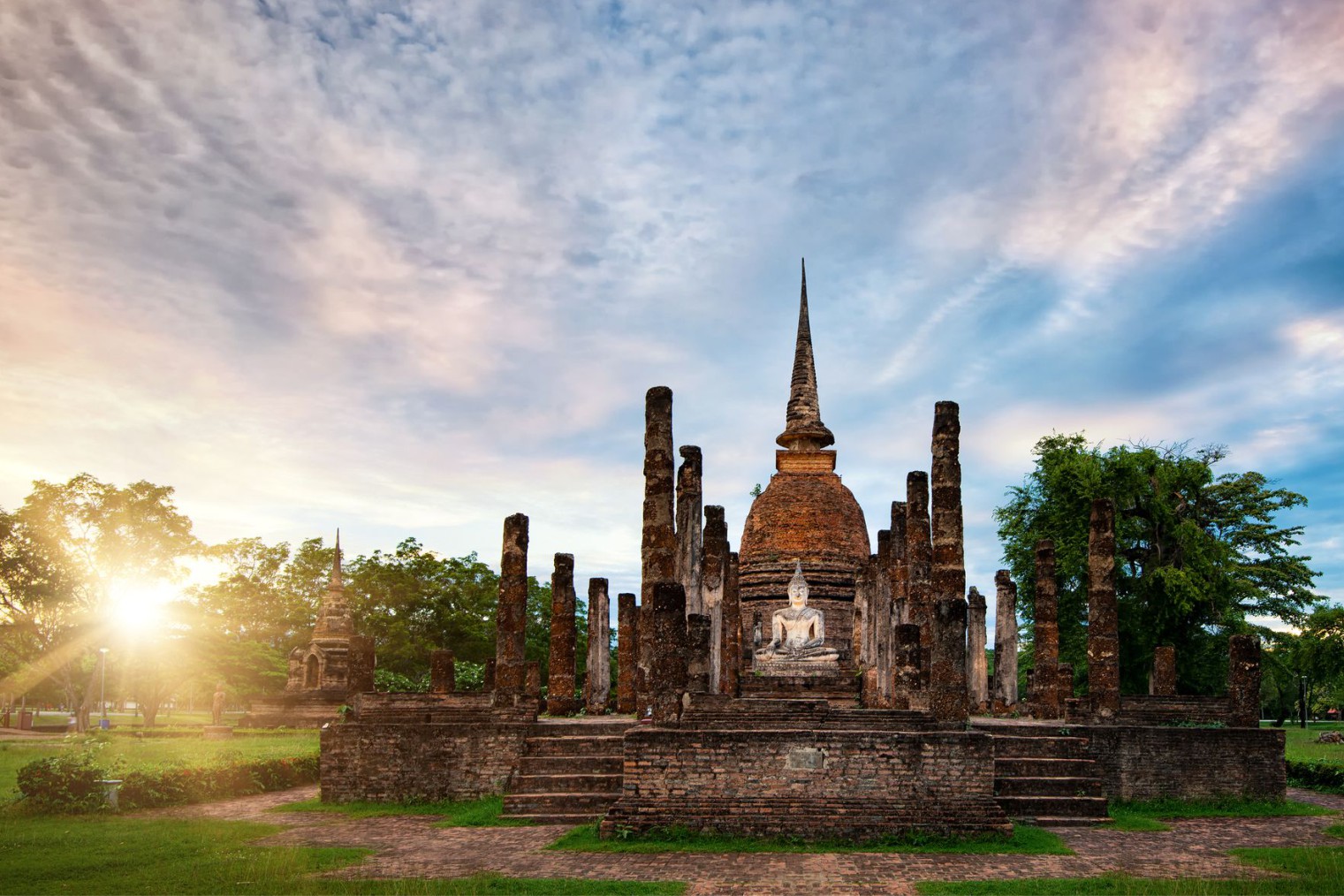 Sukhothai Historical Park (อุทยานประวัติศาสตร์สุโขทัย, map) (14 km to the west of New Sukhothai). This was the capital of the Sukhothai Kingdom from 1238 to 1438 and contains many ruins from that period.

Its importance has been internationally recognised and it is now a UNESCO World Heritage Site. The old city is a popular tourist attraction, and the site has seen much restoration since the 1960s. It is well maintained, exceptionally clean and well furnished with vendors, though with only a minimum of touts.

The whole site covers an area of approximately 70 km2 (~27 square miles) and contains 193 ruins. The park is divided into 5 zones namely: Central, Eastern, Southern, Western and Northern Zones. The central zone contains the majority of the ruins and a museum. Maps are free at the ticket office. Every zone has an entrance fee of 100 baht each, but the combined ticket for all the zones is not available anymore as of January 2020.

It is feasible to walk around the central and northern zones in 6 hours or so. There is also a 60-baht guided tour by electric tram available. The best way, however, to see the ruins is by bicycle. These can be rented from a shop opposite from the main park entrance.

The best time to see the ruins is mornings when it’s a little cooler and before the buses arrive, at noon when they have lunch, or after 16:00.

Also, if photographs are important, remember most Buddhist temples face east designed to be approached from the east so after midday you are more likely to be taking pictures into the sun.

The Central Zone of the Sukhothai Historical Park contains about 22 monuments enclosed inside a rectangular walled complex. The north and south walls are 2000 m long while those on east and west measure 1600 m. The walls are punctured by four gateways on each of the four sides.

North Zone. Located on the northern side of the central zone this zone contains about 10 scattered monuments out of which Wat Phra Phai Luang and Wat Si Chum are the most visited.

West Zone. Located west of the central zone and is approachable by the Or Gate it contains more than a dozen monuments scattered over a large undulating area. The wooded foothills were thought to offer an ideal spot to practice the Buddhist way of life and open the mind to dhamma.

South Zone. Unlike the northern and western zone the southern zone is more compact and has lesser number of monuments.

East Zone. Like the south zone the east zone also contains a handful of monuments. The monuments are scattered along the road leading to the Kamphaeng Hak Gate (East Gate) of Sukhothai Historical Park.

Si Satchanalai National Park (map) offers trekking routes through waterfalls and caves. There is Tad Dao Waterfall, originating from the Tha Pae stream. Thara Wasan Cave (map), with fantastic stalactites and stalagmites, is about 1.5 km (0.93 mi) away from the park’s office. Wildlife is found here, including hundreds of thousands of bats. Tad Duan Waterfall, about 500 m from the office of the park, is ideal for swimming.

RAIL >   Take the (express) train (7 hr from Bangkok or Chiang Mai) to Phitsanulok and go by bus from there (1 hour).