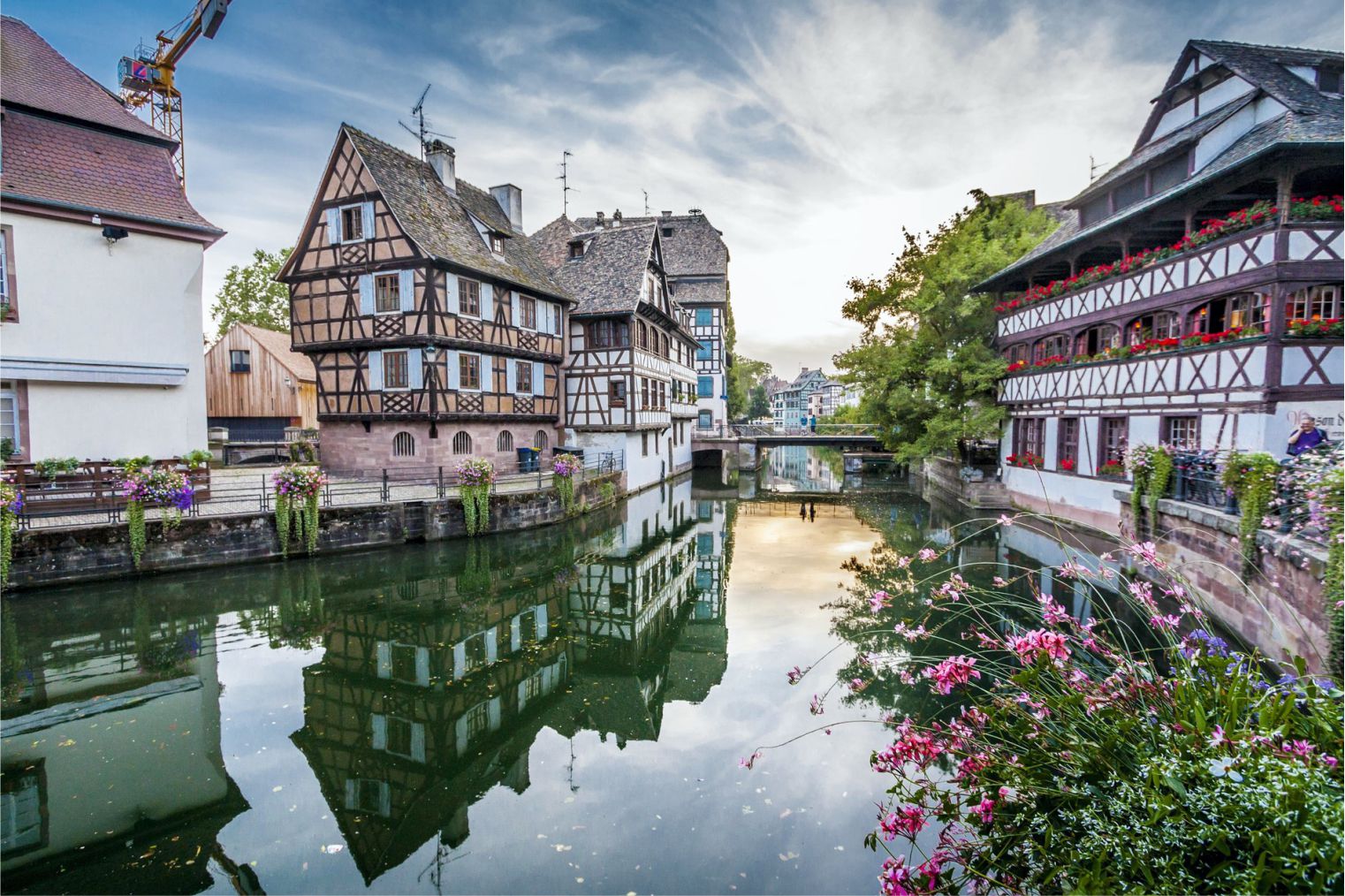 Strasbourg (map) is the capital of the *Grand-Est region of France. The city is one of the de facto four main capitals of the European Union (alongside Brussels, Luxembourg and Frankfurt).

In December, Christmas Markets can be found in many places, but the most important and beautiful are place Broglie (map) and place de la Cathédrale (map), although they are crowded. They are the best places to drink hot wine (vin chaud) and to eat Christmas cookies (Brädeles).

The Roman camp of Argentoratum was first mentioned in 12 BC; the city of Strasbourg which grew from it celebrated its 2,000th anniversary in 1988.

Petite France (map) is the name given to the small area between the rivers, just south of the Grande Île. It is home to some of Strasbourg’s prettiest and most photogenic streets and buildings, with half timbered townhouses leaning out over the narrow cobbled streets. Petite France resembles Colmar (a city an hour south, map), with picturesque canal and half-timber houses.

Boat tours along the Rhine offer views over both Strasbourg and neighbouring Germany. Batorama offer several river tours lasting from around 45 minutes to a few hours. Boats can be found below Place du Marché aux Poissons (map).

Palais des Rohan (map). French-style palace, built after the acquisition of the town by the French (1681). Home to the Museum of Fine Arts, the Archaeological Museum and the Museum of Applied Arts.

Parc de l’Orangerie (map). A beautiful classical park. It has a small free zoo featuring birds and a few other animals. Also has an excellent playground for young children.

Strasbourg is a popular tourist destination primarily thanks to the beautifully preserved and pedestrian friendly city centre, which can be explored on foot or bicycle in a few days.

Don’t forget that Strasbourg’s appeal now brings tourists to the city throughout the year, with large tour groups especially frequent during the summer months and during the annual winter market.

CityMapper – Strasbourg | The ultimate transport app and technology for mobility in cities.

+ Getting to and around Strasbourg (visitstrasbourg.fr)

RAIL >   Gare de Strasbourg (map). Trains are a great way to get around in France. For regional trains, schedules can be found at ter.sncf.com. You can get from pretty much anywhere to anywhere else by train. For long distances, use the TGV (Train à Grande Vitesse, or High-speed train) on which reservations are obligatory. TGV • Thello • Ouigo. + RailEurope • Eurostar • Thalys • izy (Paris-Brussels) • TGV Lyria (Switzerland) • DB (Germany) • RENFE (Barcelona) >> *Rail travel in France