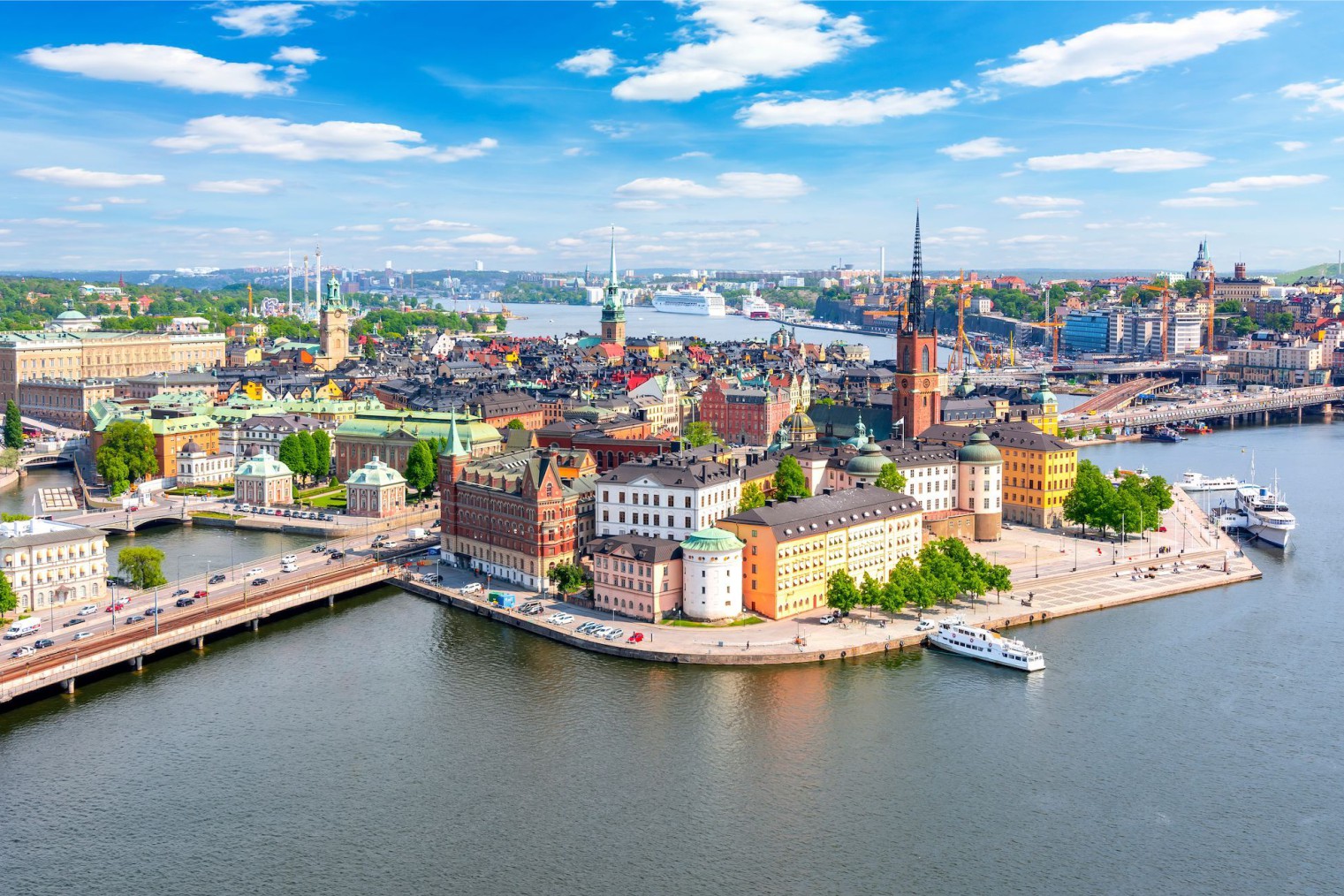 Stockholm (map) is Sweden’s capital and largest city. The inner city is made up of 14 islands across Lake Mälaren (map) and three streams into the brackish Baltic Sea, with the Stockholm archipelago with some 24,000 islands, islets and skerries.

Over 30% of the city area is made up of waterways, and another 30% is made up of green areas. Air and water are said to be the freshest of any European capital. Stockholm hosts the Nobel Prize ceremony and has around 70 museums.

Stockholm Palace (map) is the official residence and principal workplace of the Swedish monarch, while Drottningholm Palace (map), a World Heritage Site on the outskirts of Stockholm, serves as the Royal Family’s private residence.

Stockholm Cathedral / Storkyrkan (map) is the oldest church in Stockholm. Riddarholmen Church (map) Riddarholm is the ancient core of Stockholm and this is the city’s oldest building – though no longer the oldest church, as it’s nowadays simply a museum. Built as an abbey in the late 14th century. Many Swedish monarchs are buried here.

Stortorget (map). Stockholm’s oldest square, dated back to the 13th century. While the square was used for corporal punishment during most of its history. Nobel Museum (Nobelmuseet, map). Located in the old Stock Exchange house in the middle of Gamla stan, this museum has lots of material on the Nobel Prize. Christmas fair (Stortorgets julmarknad, map). A Christmas fair open daily 11:00-18:00 from late November to late December.

Stockholm’s metro system is known for its art installations, with nearly all stations offering some form of artwork on display. The art on the blue line in particular is of note.

The heights of northern Södermalm give a great view (map) of central Stockholm, especially from the street Fjällgatan (map), the Fåfängan (map) mountain just east of to Stadsgårdshamnen.

Stockholm has more than 70 museums, ranging from those large in size and scope to the very specialized, including the Butterfly Museum, the Spirits Museum, and the Dance Museum.

Beyond the art museums mentioned above, Stockholm has a vivid art scene with many art galleries, exhibition halls and public art installation. Some of the galleries are Galleri Magnus Karlsson (map), Lars Bohman Gallery (map), Galerie Nordenhake (map), Magasin 3 (map).

The Stockholm archipelago has enough beaches and rocks for everyone, and the right to access allows bathing nearly everywhere, if no notice of the opposite. As in the rest of Sweden, public adult skinny-dipping is not explicitly illegal, but frowned upon. The only sanctioned nudist beach is in Ågesta (Söderort, map).

Finding a good toilet in Stockholm can be tricky. Many department stores and fast-food restaurants have clean toilets, often for the charge of 5 kr.

+ Getting around Stockholm (visitstockholm.com) • Public transport in Stockholm County

The dedicated Arlanda Express Train leaves from the basement level of each terminal (Arlanda South/Södra and Arlanda North/Norra) and runs non-stop to Stockholm Central Station (map) in 20 minutes, departing every 15 minutes during daytime.