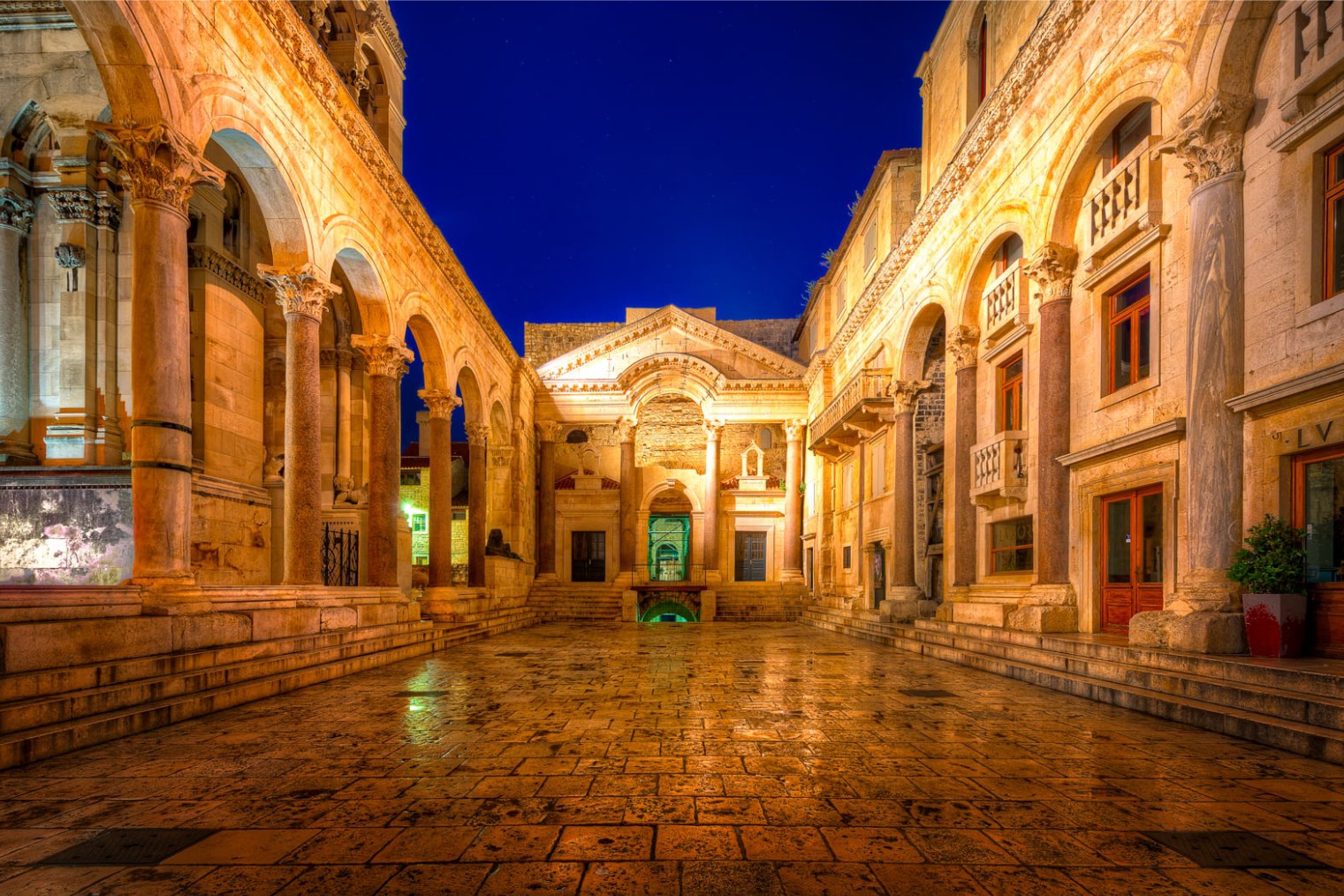 Split (map) is a city in Central Dalmatia, Croatia. The city was built around the Diocletian palace (a palace/fort built for the retired Roman emperor Diocletian, map) where the locals sought refuge centuries ago. Wandering the historic centre of Split you can still clearly see the Roman walls, squares, and temples.

Although the beginnings of Split are traditionally associated with the construction of Diocletian’s Palace in 305, the city was founded several centuries earlier as the Greek colony of Aspálathos, or Spálathos. The exact year the city was founded is not known, but it is estimated to have been in the 3rd or 2nd century BC.

Central Split is quite compact and most sights can be easily seen and best experienced on foot. The historic core of Split with Diocletian palace (map) is among the first urban complexes to enter the list of the UNESCO world heritage in year 1979. Most probably this one of a kind Imperial Palace was built from 298-305 AD and is one of the most significant original structures of the period mostly because so much of it has been preserved. Later this Palace contributed to the broadening of the town because as the city evolved beyond its walls.

Katedrala sv. Duje (St. Duje’s cathedral, map). Built around 305 AD as a mausoleum of Roman emperor Diocletian’s (the oldest cathedral building in the world). The cathedral is also a very beautiful mixture of Roman temple and Catholic church. It also has a beautiful belltower which provides you a great panoramic view of Split, nearby islands and Marjan hill.

Varoš (map) – one of the oldest parts of town. A place where most of the city peasants and fishermen lived. Charming streets and beautiful small houses.

Archaeological Museum (map). The oldest museum in Croatia (1820), about 20 min walk north of the old town. Many artifacts and monuments from Roman colonies Salona and Narona.

Farmers Market (Pazar, map). Split’s Pazar is the place to go for a variety of wares such as fruits and veggies, clothing and other odds and ends. Lots of local colour and excitement.

Dalmatia is well known for its world class wines, but when in Split it is a must to try soda drinks called Pipi and Orela, produced by local beverage manufacturer Dalmacijavino.

BUS >   Promet. Most international services to Split involve a change of buses in Zagreb, but Flixbus have direct buses from Vienna (11 hr), Munich (13 hr) and Mostar (4 hr).

RAIL >   Trains run to Split from Zagreb once daily (with a second train mid-summer, Ticket) taking six hours, and once overnight. The rail network passenger lines are operated by Hrvatske željeznice.

WATERWAYS >   Jadrolinija is the main Croatian passenger shipping line that maintains the largest number of regular international and domestic ferry and shipping lines.