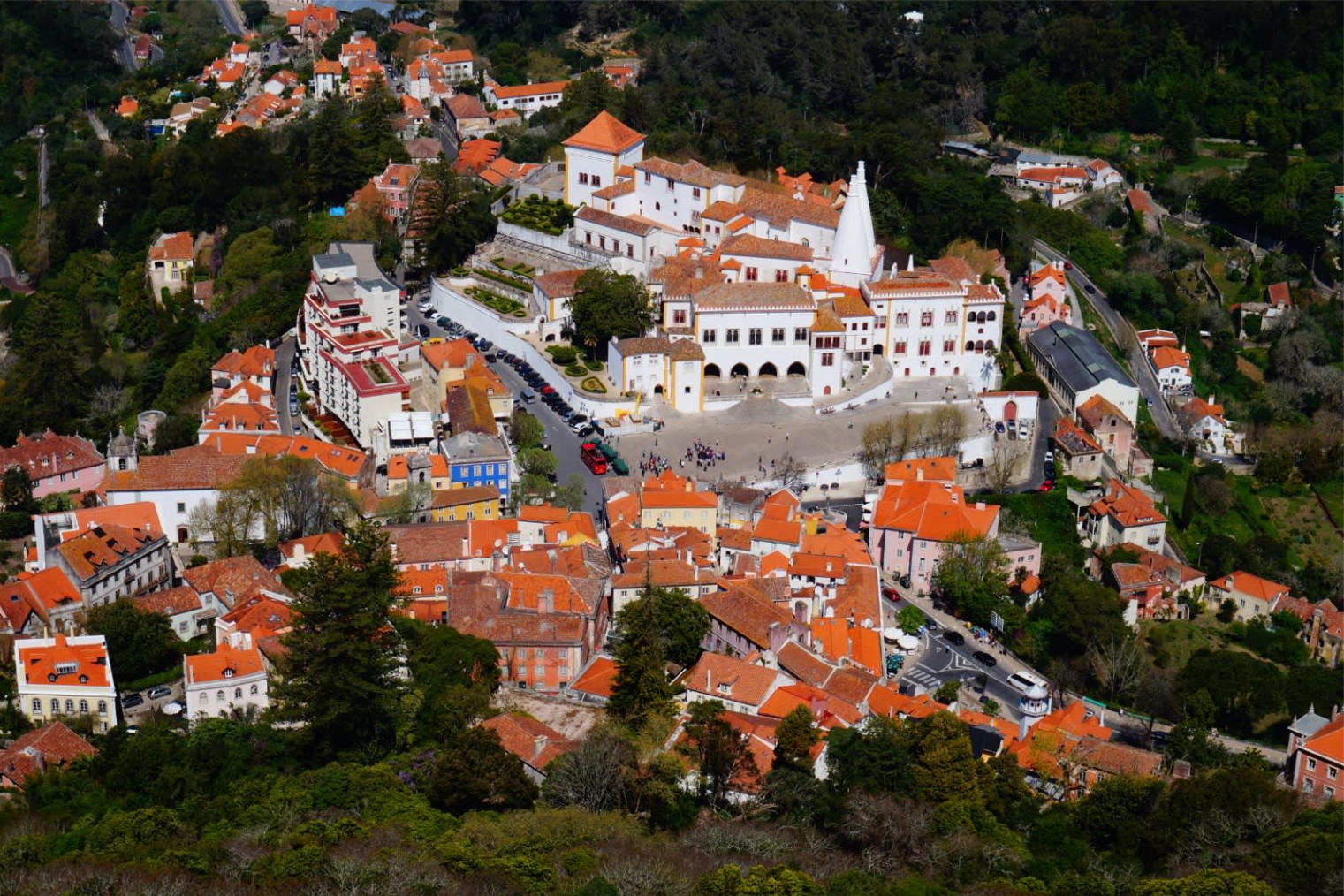 Sintra (map) is a town in Extremadura, 28 km from Lisbon, houses a Royal Palace (map), used by generations of Portuguese royalty prior to the 1910 revolution. The surrounding hills are surmounted by the remains of the Moorish Castle (map) and by the 19th century Pena Palace (map).

The area includes the Sintra-Cascais Nature Park (map) through which the Sintra Mountains run (map) a veil of mystery over the town nestling on its northern slopes. The hills and the surrounding area have been classified as UNESCO World Heritage Site for their cultural significance and for their outstanding natural beauty.

Admission prices and opening times of the sites can be found on the Parques de Sintra website. Sintra can be extremely busy, particularly in summer, and especially at weekends. The main sights are best visited at the start of the day (most open at 9.30am) or late afternoon (most are open until 7-8pm) to avoid the crowds and queues.

There is a walking trail through the woods to the Moorish castle that starts above the Sintra city center at the wooden turnstile on the Rampa do Castelo (map). It is reasonably well signed but best to get a map from the tourist office or ticket counter at Sintra National Palace. Once you have made the journey to the castle, it’s only few more minutes walk up the hill on the main road to the Pena Palácio. The walk to Monserrate from the Sintra town center is still approximately one hour but is less strenuous.

Convento dos Capuchos (Colares, map). A secluded abbey where monks used to live in close contact with nature. It has no electric light, so use your flash on to shoot great pictures! Don’t miss the wood carved chapel, the library and the friars’ cells. The ticket is valid to visit the Pena Palace and one other building — your choice of the Moorish Castle or the Convento.

Moorish Castle (Castelo dos Mouros, map). One of the highlights of Sintra not to be missed. Ruins of a castle built by the Moors from the 10th century onwards. There isn’t much inside the castle but the views from around 400 m above sea level are stunning. Be careful on the walls though, they’re very narrow in places and lack any safety railings.

Quinta da Regaleira (map) Regaleira Palace is part of the built heritage included in UNESCO’s world heritage list as ‘Sintra cultural landscape’. Its origins date back to 1697, when the property was bought by José Leite, but it was only by the late 19th century that the history of the Palace and Gardens begins.

BUS >   It’s probably best for most visitors to take one or more of the public bus routes. The routes are circular, with a stop in front of each of the major tourist sights. One ticket is good for all day on that particular bus route. Think a very cheap hop-on/hop-off bus route, and you have the idea. All the buses stop directly at the train station as well (just to the right upon exiting), so they can be caught immediately upon arrival via train.

Rede Expressos is one of the largest inter-city bus companies.

Comboios de Portugal. As a rule of thumb, if one is traveling by rail within Portugal or internationally, the main railway junction is in Entroncamento (map), from here all lines branch out and all trains make a stop.