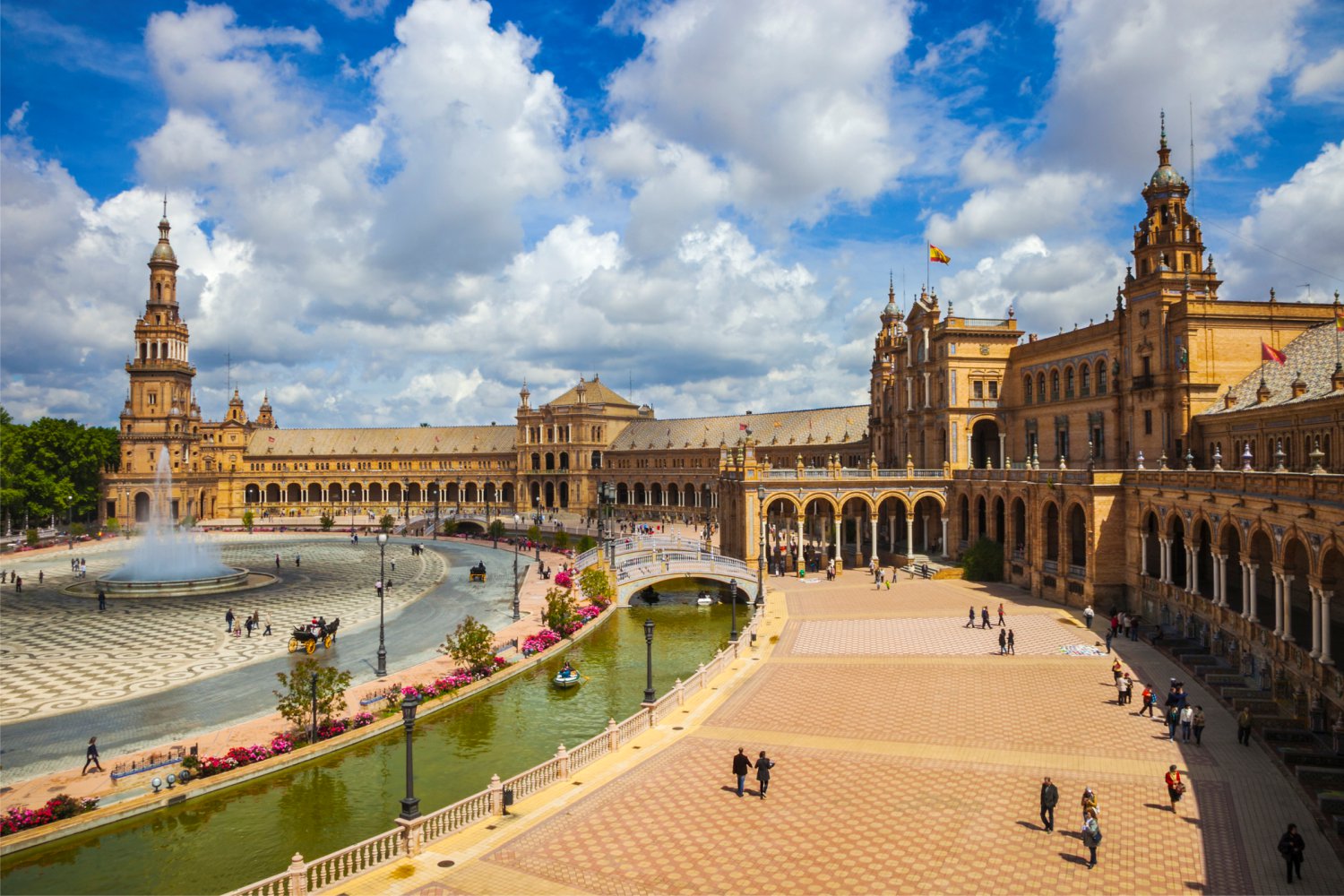 Seville (map) is Andalusia’s capital. With heritage from the Arabs and from the Age of Discovery, as well as the flamenco scene, Seville is a diverse destination.

Seville became one of largest cities in Western Europe in the 16th century. Coinciding with the Baroque period, the 17th century in Seville represented the most brilliant flowering of the city’s culture.

Seville is approximately 2,200 years old. The passage of the various civilizations instrumental in its growth has left the city with a distinct personality, and a large and well-preserved historical centre. In the 19th century Seville gained a reputation for its architecture and culture and was a stop along the Romantic “Grand Tour” of Europe.

Barrio Santa Cruz (map) is the old Jewish Quarter, the winding narrow lanes just east of the cathedral and north of Alcázar. It’s the most charming part of the city, with lots of bars and eating places, but it’s also the most touristy.

Real Alcázar (map), Enter from Plaza del Triunfo. A beautiful palace in Mudéjar (Moorish) style, built in the 14th century. With its myriad rooms, extravagant architecture, lavish gardens with many courtyards, ponds and secrets to be explored, it is a fascinating place to visit. The room where Christopher Columbus’s journey across the Atlantic was planned has his coat of arms embroidered on the wall along with those of royalty.

Museo de Bellas Artes (map). Considered by some as the second most important fine arts museum in Spain after the Prado in Madrid. The museum building is a former mercy convent renewed in the 17th century and the 15 exhibition rooms show a comprehensive picture of Sevillian art from the Gothic period to the early trends of the 20th century. The square just outside hosts an open-air art market on Sundays until around 13:30.

Museo Arqueológico de Sevilla (Seville Archeology Museum, map). It has one of the best collection of Roman-era artifacts in Spain, brought from nearby Italica.

Palacio de Las Dueñas (Las Duenas Palace, map) is a palace belonging to the House of Alba. It was built in the 15th century, with Renaissance architecture style and Gothic-Mudejar influences. The palace is one of the major historic homes in the city. The Palace has a great collection of paintings, ceramics, antique furniture and other decorative arts, sculptures of Ancient Rome and contemporary, Flemish tapestries, mosaics, and many other pieces of art. An important site for understanding Andalusian customs and history.

Palacio de la Condesa de Lebrija (Palace of the Countess of Lebrija, map). The palace is considered the ‘best paved house-palace in Europe’ owing to its collection of Roman mosaics, which paved practically the whole of the ground floor. There is also a collection of well parapets, vases, amphora, columns and sculptures of incalculable worth.

Archivo General de Indias (*General Archive of the Indies, map). This Renaissance building houses extensive archives relating to the Spanish conquest of the Americas, and is designated a UNESCO World Heritage Site. Included in the collection are the diaries of Columbus. The archive hosts rotating special exhibits.

Feria de Abril (Seville Fair). Also known as “Feria de Sevilla” – a release after the somberness of Semana Santa. To say this is a huge party would be an understatement. Most if not all of Seville takes a week’s holiday and they plan for the fair months in advance. The fair is close to the river.

This must be one of the best funfairs in Europe – it takes weeks to assemble and pack up. Experience traditional dress, flamenco dancing (and the “sevillanas”, the traditional dance of the region of Seville), guitars, fino, great tapas and participants who dance with gusto and eat and drink the day and night away.

!  Sevillanos are famous for their nightlife so if you don’t plan to be out at all hours yourself, then seek accommodation on a street without lots of bars and restaurants, or ask for a room set back from the street.