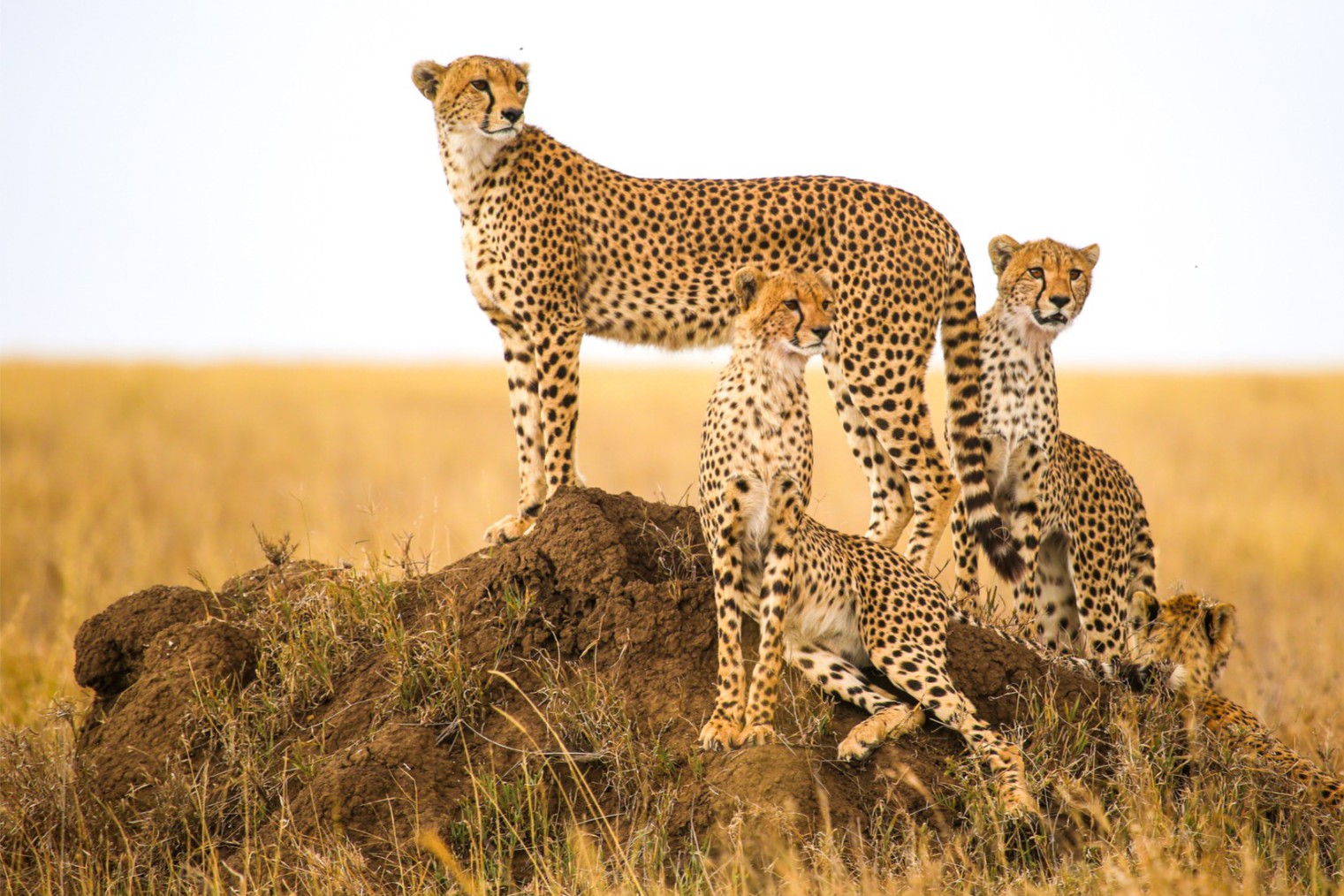 Serengeti National Park (map) is a large conservation area in the north of Tanzania (over 15,000,000 hectares (37,000,000 acres) of virgin savanna). The park flows over into neighboring Kenya where it’s known as the *Maasai Mara National Reserve.

The Serengeti is well known for the largest annual animal migration in the world of over 1.5 million blue wildebeest and 250,000 zebra and the largest lion population in Africa.

The Serengeti gained fame after *Bernhard Grzimek and his son Michael produced a book and documentary titled Serengeti Shall Not Die in 1959.

Serengeti National Park is most famous for its animal migration. Nearly one million wildebeest and 200,000 zebras move from the northern hills to the south every October and November during the short rains. They then move toward the west and north from April to June when the long rains progress. The instinct to migrate is strong. Hence, no drought, gorge, or river infested with crocodiles can prove to be a deterrent.

People from all over come here to engage in safari. The name Serengeti comes from the Maasai language, meaning ‘endless plains’ while the word safari is the Swahili word for ‘journey’.

The Serengeti ecosystem is one of the oldest on earth. The essential features of climate, vegetation and fauna have barely changed in the past million years. Early man himself made an appearance in Olduvai Gorge about two million years ago.

Safaris in Tanzania can be put into two categories, the Northern Circuit (Serengeti, Ngorongoro, Manyara and Tarangire) and the Southern Circuit (Selous, Mikumi and Ruaha). This is an oversimplification though and does not include other interesting, but harder to reach, parks such as Katavi and Gombe, to name just two. For tourists, the first two groupings are more accessible, as a variety of packages are offered by several tour companies.

Some of the more popular safari companies are Warrior Trails, Ranger tours & Leopard tours. Other popular companies rated by the Tanzania Association of Tour Operators include Ajabu Adventures, Bush2Beach Safaris, Fay Safaris. Serena and Sopa are popular lodging spots and have facilities throughout the Northern Circuit. However, don’t discount using smaller tours and lesser known lodging facilities which are just as good if not better than the larger tours and lodges.

For better prices and some of the most beautiful parks avoiding the traffic jams of safari vehicles, head for the southern circuit, particularly Ruaha National Park where the range of wildlife is much greater and the scenery spectacular. *Iringa is a great place to base yourself to explore this area and sort out your safari trips.

In Serengeti National Park and Ngorongoro Conservation area the park fee is ~US$71 per person per day, for camping ~US$48 per person per night and ~US$30 per vehicle per day.

BUS >   Tahmeed Buses. The bus is the most common way to travel around in Tanzania.