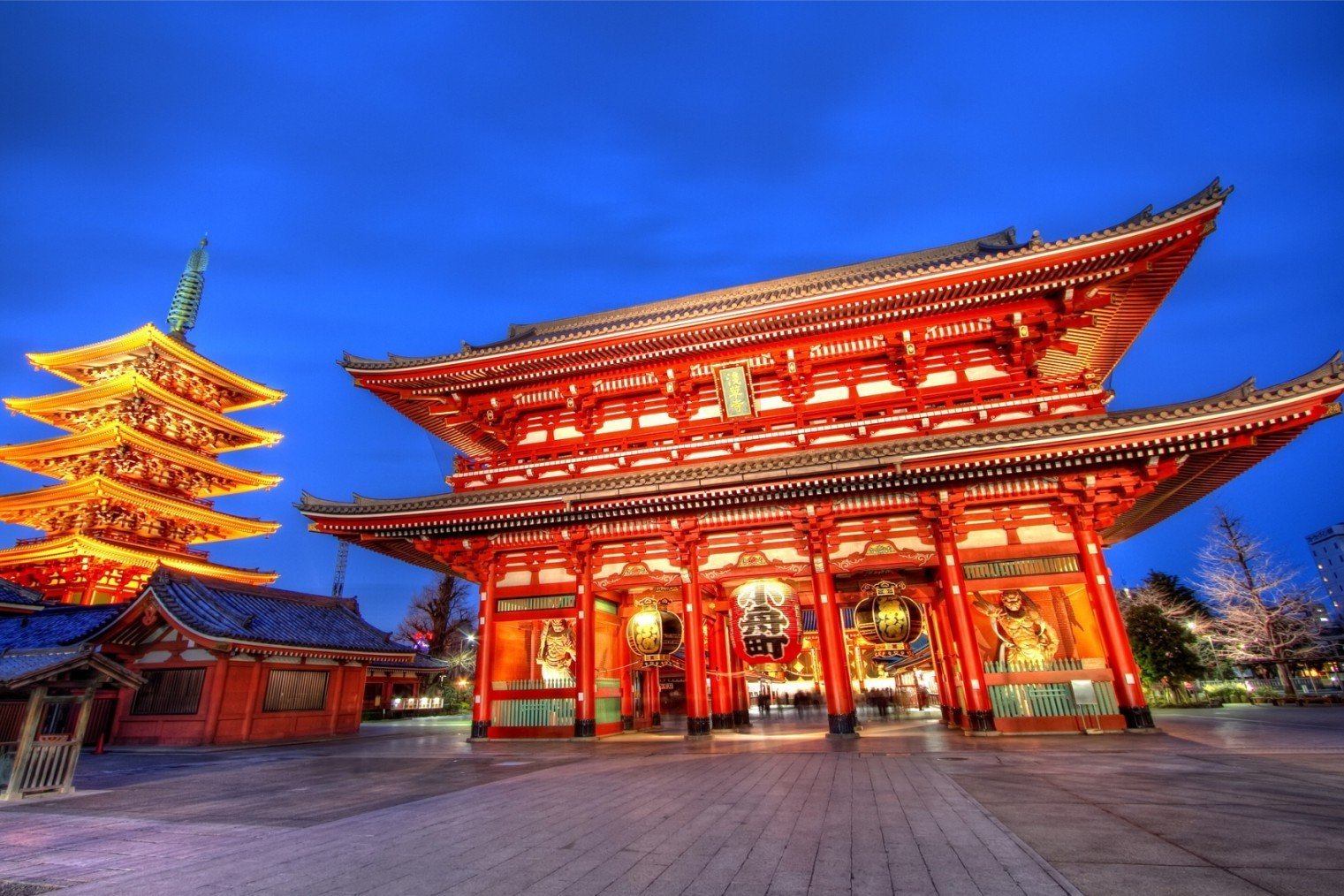 Sensō-ji (map) is Tokyo’s oldest temple, and one of its most significant. Adjacent to the temple is a five-story pagoda, the *Asakusa Shinto shrine, as well as many shops with traditional goods in the Nakamise Shopping Street (map).

The Sensoji Kannon temple is dedicated to *Kannon Bosatsu, the Bodhisattva of compassion, and is the most widely visited spiritual site in the world with over 30 million visitors annually.

Asakusa Shrine, also known as Sanja-sama (Shrine of the Three gods), it is one of the most famous Shinto shrines in the city. The shrine honors the three men who founded the Sensō-ji. Asakusa Shrine is part of a larger grouping of sacred buildings in the area.

With so many religious establishments, there are frequent matsuri (Shinto festivals) in Asakusa area, as each temple or shrine hosts at least one matsuri a year, if not every season. The largest and most popular is the Sanja Matsuri in May, when roads are closed from dawn until late in the evening.

Sanja Matsuri (三社祭, “Three Shrine Festival”), or Sanja Festival. It is considered one of the wildest and largest. Sanja Matsuri is held on the third weekend of every May at Asakusa Shrine.

During World War II, the temple was bombed and destroyed during the 10 March air raid on Tokyo. It was rebuilt later and is a symbol of rebirth and peace to the Japanese people. In the courtyard there is a tree that was hit by a bomb in the air raids, and it had regrown in the husk of the old tree and is a similar symbol to the temple itself.

The Kaminarimon (雷門, “Thunder Gate”, map) is the outer of two large entrance gates that ultimately leads to the Sensō-ji (the inner being the Hōzōmon) in Asakusa, Tokyo, Japan. The gate, with its lantern and statues, is popular with tourists. It stands 11.7 m tall, 11.4 m wide and covers an area of 69.3 m2

CityMapper – Tokyo | The ultimate transport app and technology for mobility in cities.

Asakusa is the terminus of the Metro Ginza line (G19), which is the best way to get into the area, perhaps by connecting from the Yamanote line at Ueno.

There are two brands of prepaid fare cards, JR East’s Suica, and PASMO, offered by private (non-JR) lines. Functionally they are completely interchangeable and can be used on just about every subway, train and bus line in Tokyo (with the exception of Shinkansen and limited express trains).