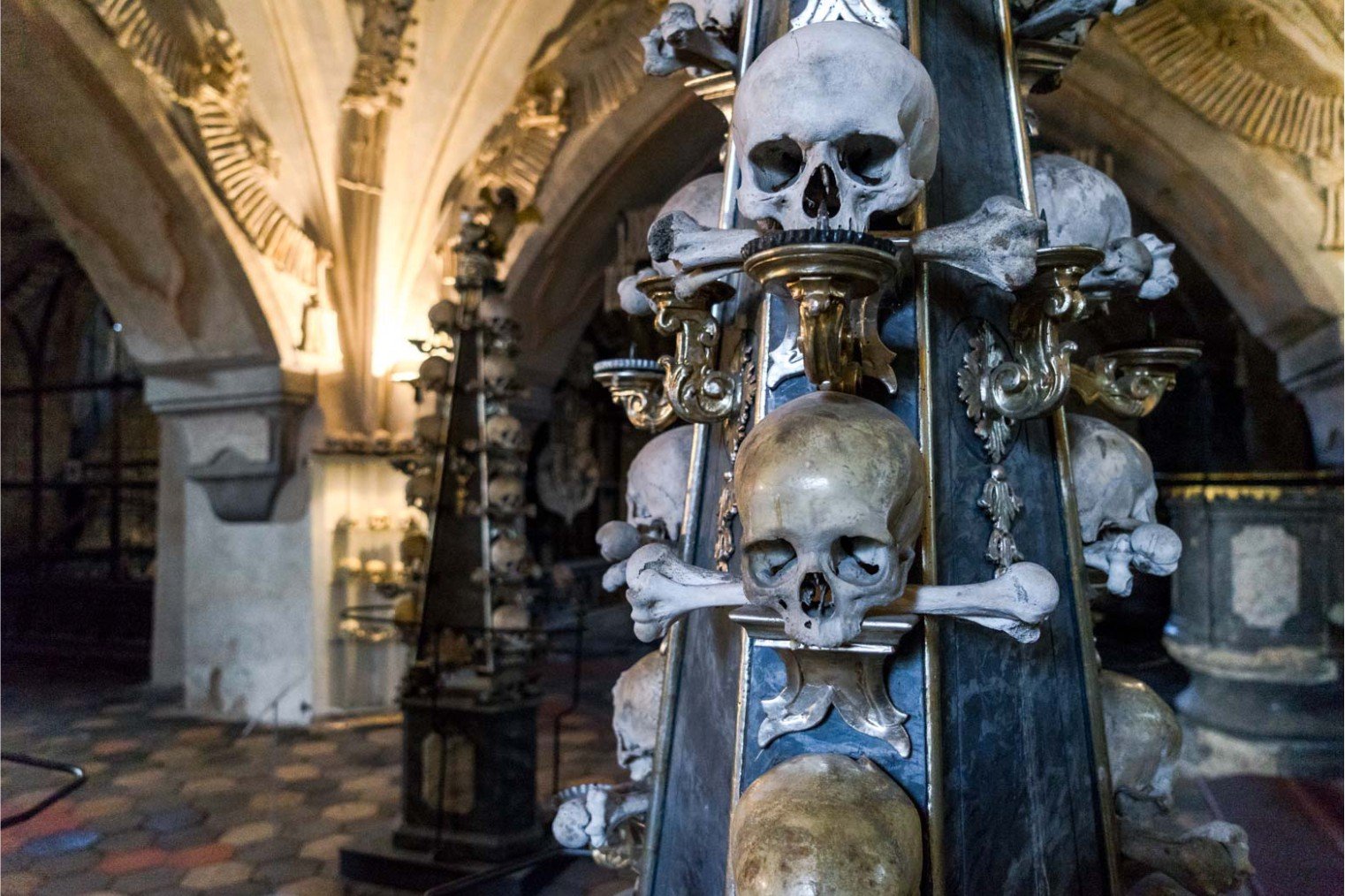 The Sedlec Ossuary (Kostnice v Sedlci, map) is a Roman Catholic chapel, located beneath the Cemetery Church of All Saints, part of the former *Sedlec Abbey in Sedlec, a suburb of Kutná Hora.

Sedlec Ossuary, alias the Bone Church, is one of the most visited places in the Czech Republic. This Roman chapel is pretty small, and even if you take your time, you won’t spend here more than twenty to thirty minutes.

The ossuary is estimated to contain the skeletons of between 40,000 and 70,000 people, whose bones have, in many cases, been artistically arranged to form decorations and furnishings for the chapel.

When you see photos from the interior of Bone Church, your first question might be, who designed it and where the idea came from.

The history of Sedlec cemetery starts in 1278 when the abbot Henry returned from Jerusalem with a jar of earth from the Holy Land, and he scattered it over the cemetery. This act made from Sedlec a popular place where it was an honor to be buried.

The mid-14th century was not a happy time for Czech Lands, because of the plague and Hussite Wars, which have a consequence of many deaths, more than the local cemetery was able to contain. Also, at that time, a new chapel was built on the site, and many bones had to be dug up because of the construction and later were stored inside.

A legend says that in the 16th century, a half-blind monk started arranging the bones, but it was not until 1870 when Sedlec Ossuary started to get today’s appearance. The man responsible for ‘beautifully’ designed bones was a woodcarver Frantisek Rint, and we can admire the unusual decoration even now, in the 21st century.

Although Kutná Hora has some comparatively drab modern architecture, it was inscribed on the UNESCO World Heritage List in 1995 for the Historical Town Centre (map), including the Church of St Barbara (map) and the Cathedral of Our Lady at Sedlec (map).

The town is about 3 km long, so it is possible to explore on foot. This isn’t particularly rewarding though, as most of it is residential and the attractions (with the exception of the Kostnice Ossuary) are concentrated at the other end of town from the train station.

IDOS | Seznam – Both sites cover all Czech trains, buses and city transport and many train and bus lines abroad.

BUS >   Good service is offered by Eurolines and RegioJet. Cheap tickets from Poland are offered by FlixBus.

AIRPORTS >   Václav Havel Airport – about 10 km west of the centre of Prague.

Mapy.cz – is a good source for cycling information – switch the map (via Změnit mapu – Turistická) to see cycling routes in violet color.

Tourism in the Czech Republic (wiki)