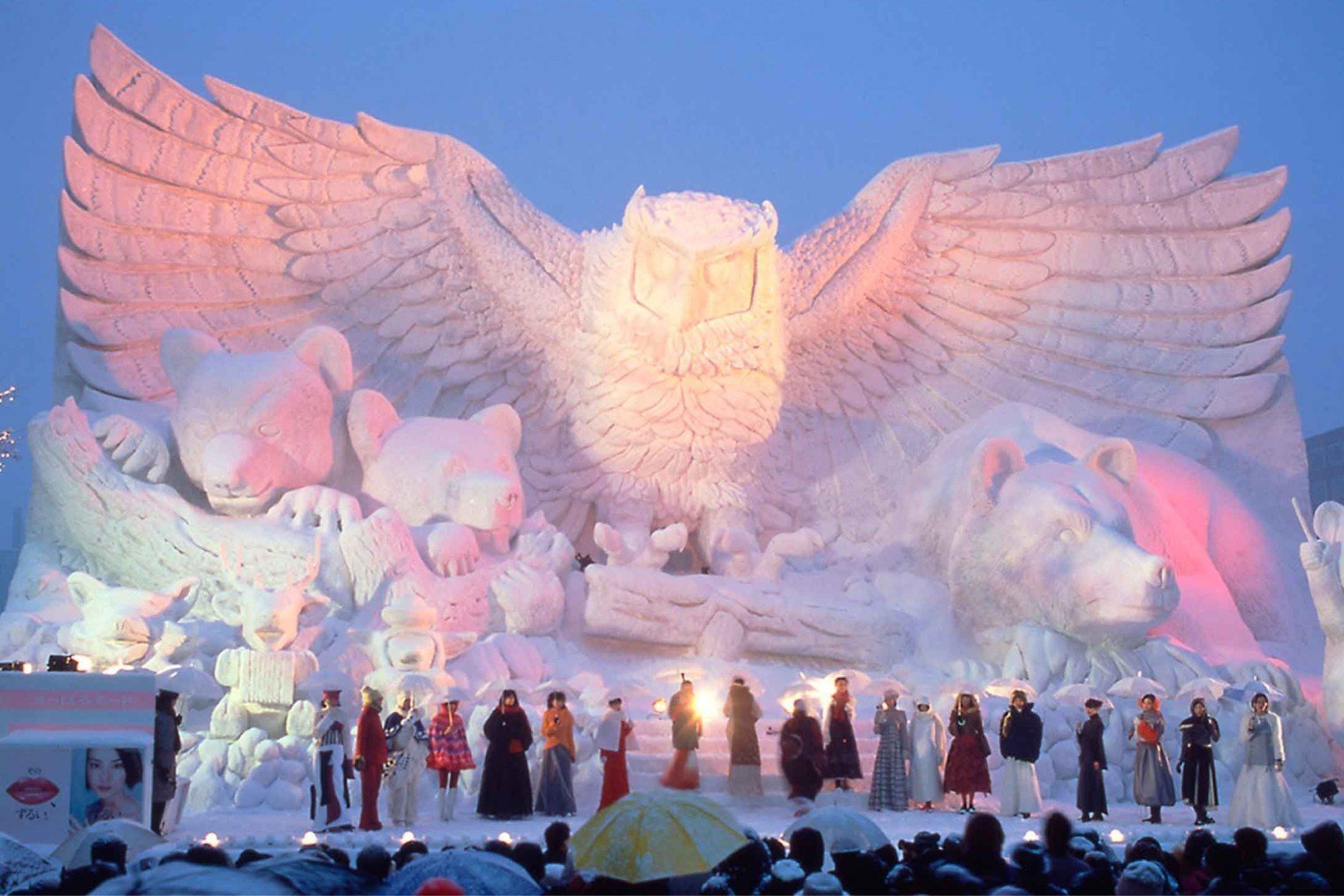 The Sapporo Snow Festival (さっぽろ雪まつり, Sapporo Yuki-matsuri) is a festival held annually in Sapporo, over seven days in February. *Odori Park (map), Susukino (map), and Tsudome (Sapporo Community Dome, map) are the main sites of the festival. Susukino (すすきの) is a red-light district in Chūō-ku.

The main site is the Odori Site in Sapporo’s centrally located 1.5 kilometer long Odori Park. The festival’s famous large snow sculptures, some measuring more than 25 meters wide and 15 meters high, are exhibited there. They are lit up daily until 22:00.

Sapporo (札幌) is the capital and largest city of the northern island of Hokkaido. One of Japan’s newest and nicest cities, it has little in the way of traditional architecture.

Besides about a dozen large snow sculptures, the Odori Site (map) exhibits more than one hundred smaller snow statues and hosts several concerts and events, many of which use the sculptures as their stage.

A good view over the Odori Site can be enjoyed from the Sapporo TV Tower (map) at the eastern end of Odori Park. The tower has extended hours (8:30 to 22:30) during the festival. Admission to the top observatory deck costs 720 yen per adult. A 1100 yen ticket allows a day visit and a night visit.

The Susukino Site, located in and named after Sapporo’s largest entertainment district, exhibits about one hundred ice sculptures. Susukino is located only one subway stop south of Odori Park. The ice sculptures are lit up daily until 23:00 (until 22:00 on the festival’s final day).

The less centrally located Tsu Dome Site is a family oriented site with three types of snow slides, snow rafting and more snow sculptures. Inside the dome, there are many food stands and a stage for events. The Tsu Dome Site is open daily from 9:00 to 17:00

Every year, each site is expected to be very busy with preparation until the last minute. If you want to see how the festival is prepared, you can go to Odori site on the day before the opening or go to Susukino site three days before the opening and you will see the people working on the ice sculptures.

All the ice sculptures will be destroyed on the next day after the Snow Festival for safety reasons. So the festival is really short and that’s the only period you can enjoy this snow and ice museum during one year.

That’s also the reason why it’s so hard to book the hotel during this season. For those who wish to experience the special winter atmosphere created by snow and ice sculptures, Planning ahead is strongly advised.

Hoheikyo Onsen (豊平峡温泉, map) Probably the most beautiful outdoor hotspring that is easily accessible from Sapporo. Separate areas for male and female guests offer an indoor bathing area and a large outdoor pool with mountain view. Massage, a beer bar and a restaurant (Indian curry or Japanese soba) are available on site. A free shuttle bus departs daily from Makomanai subway station (map).

List of Places of Scenic Beauty of Hokkaido (wiki)