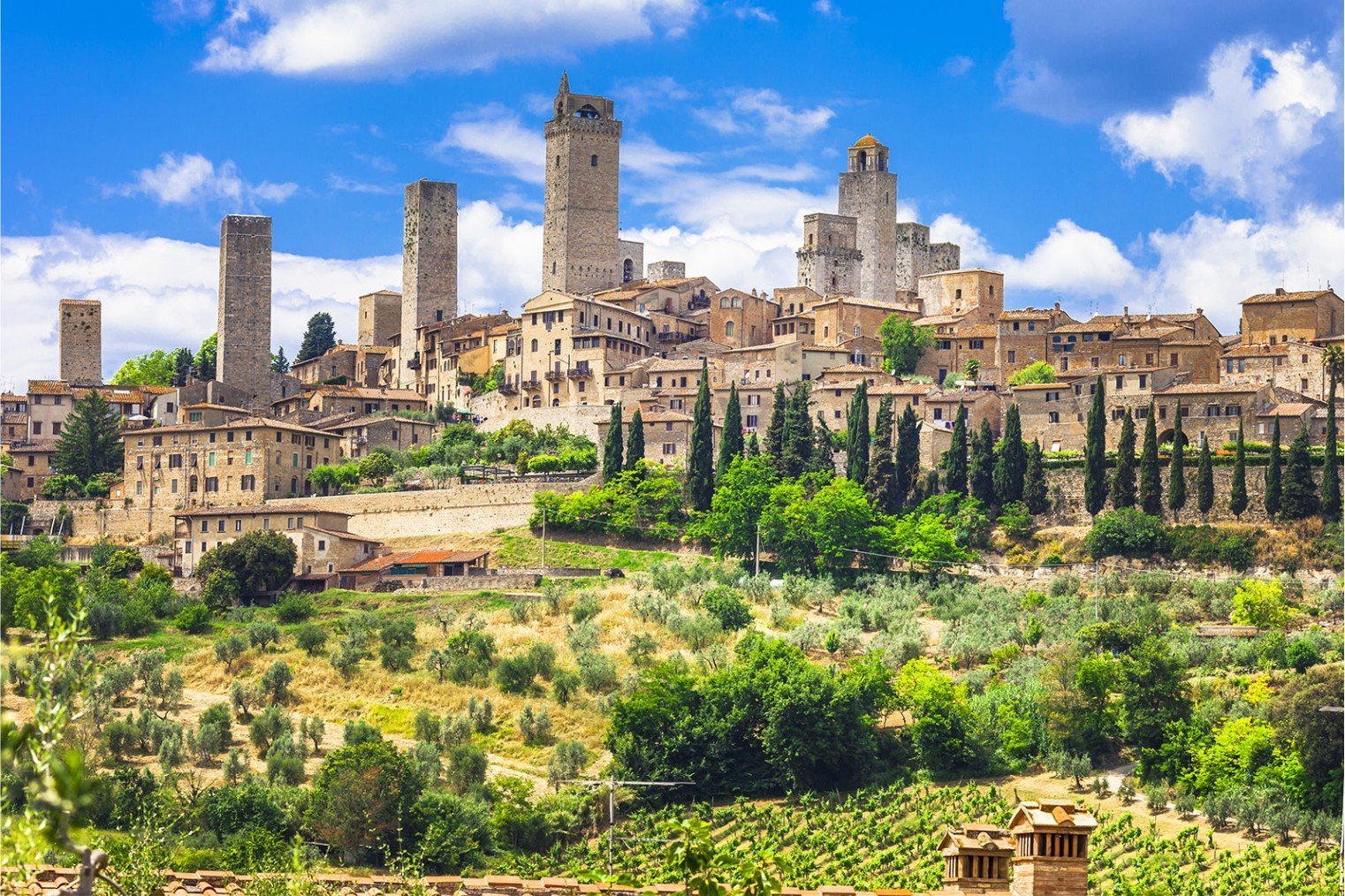 Known as the “Town of Fine Towers”, San Gimignano is famous for its medieval architecture, unique in the preservation of 14 of its tower houses, which, with its hilltop setting and encircling walls, form an unforgettable skyline. Within the walls, the well-preserved buildings include notable examples of Romanesque and Gothic architecture.

It is small enough to be effectively visited as a day trip from nearby cities like Siena and Florence, but it has a different, more peaceful atmosphere at night that many travelers find it worthwhile to experience.

The “Historic Centre of San Gimignano” is a UNESCO World Heritage Site. The town also is known for saffron, the Golden Ham, and its white wine, Vernaccia di San Gimignano, produced from the ancient variety of Vernaccia grape which is grown on the sandstone hillsides of the area.

The city is on the ridge of a hill with its main axis being north/south. It is encircled by three walls and has at its highest point, to the west, the ruins of a fortress dismantled in the 16th century. There are eight entrances into the city, set into the second wall, which dates from the 12th and 13th centuries.

Piazza della Cisterna (map). This Piazza, entered from Via San Giovanni, is the main square of the town. It is triangular in shape and is surrounded by medieval houses of different dates, among them some fine examples of Romanesque and Gothic palazzos.

Piazza Duomo (map). This piazza is to the north of Piazza della Cisterna and is connected by a passage adjacent to an open loggia. To the west, at the top of the square, stands the *Collegiate Church (map), reached by a broad flight of steps.

While in other cities, such as Florence, most or all of their towers have been brought down by wars, catastrophes, or urban renewal, San Gimignano has managed to conserve fourteen towers of varying heights, for which it is known internationally.

Buses leave from Florence’s bus station (next to the train station) hourly, and take 1.25 – 2 hr including a change in Poggibonsi. From Siena > 1 hr and, operated by Tiemme SpA. *Volterra has buses to San Gimignano every day, that take 2 hours and change in Colle di Val d’Elsa.