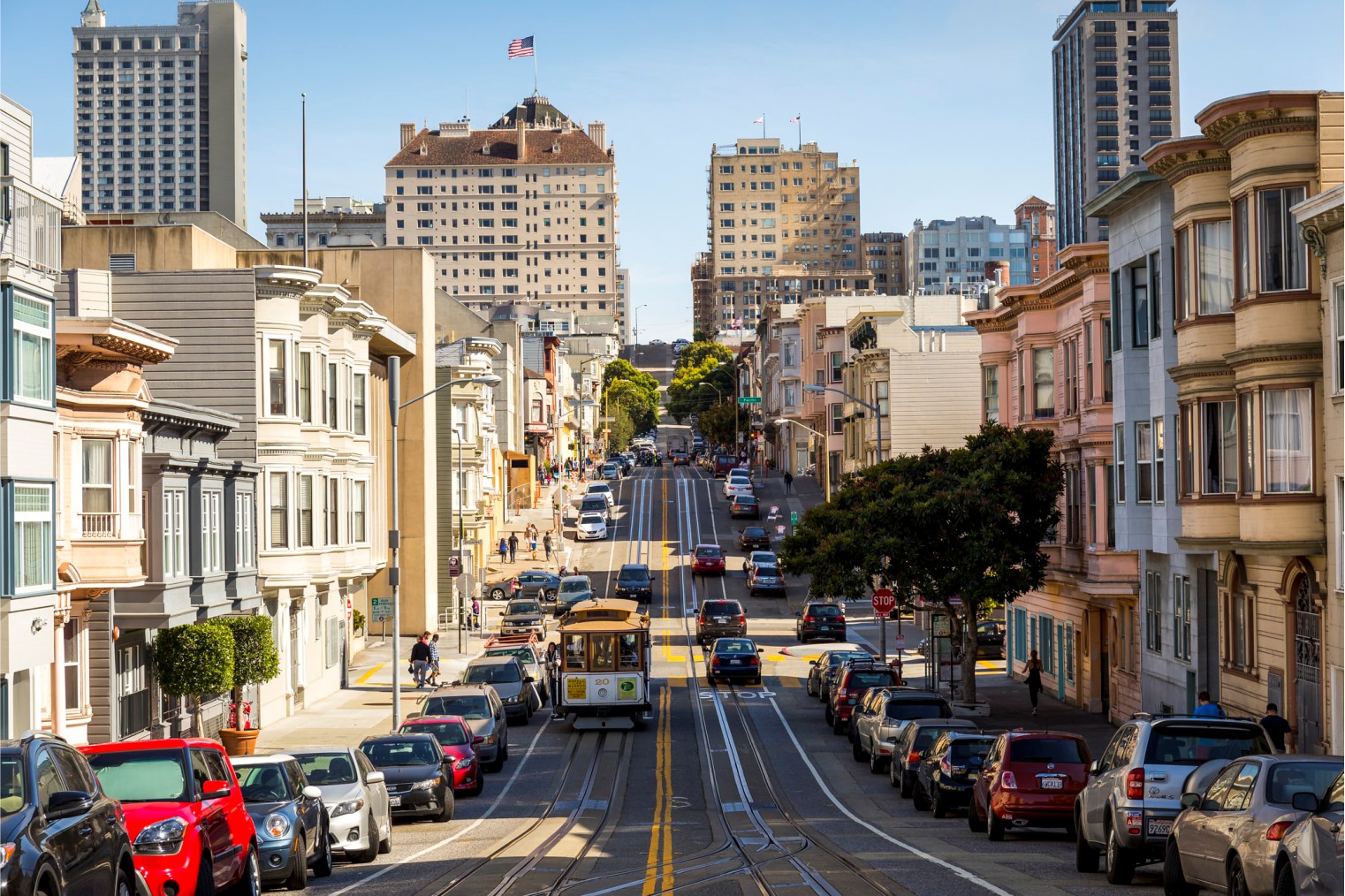 Officially the City and County of San Francisco (map), is a cultural, commercial, and financial center in Northern California. San Francisco was founded on June 29, 1776, when colonists from Spain established the Presidio of San Francisco at the *Golden Gate.

Several of San Francisco’s parks and nearly all of its beaches form part of the regional Golden Gate National Recreation Area (map), one of the most visited units of the National Park system in the United States.

The city is a fantastic base to explore the treasures of San Francisco’s neighbors to the east across the Bay Bridge, to the north past the Golden Gate Bridge, and to the south down the peninsula.

Golden Gate. Fashionable neighborhoods, e.g., the Marina District (map), Cow Hollow (map), and *Pacific Heights (map), with extensive views and historical landmarks — Fort Mason (map), The Presidio (map), and the iconic Golden Gate Bridge. The Presidio is huge, with 1,480 acres of rolling hills, forests, hiking trails, historic buildings, architecture, beaches, and marsh lands. It has one of the most intact natural environments you will find on the peninsula and is a must for every itinerary.

Fisherman’s Wharf (map). A touristy waterfront neighborhood which encompasses Ghirardelli Square (map), Pier 39 (map), and the ferry launch to Alcatraz Island, as well as a plethora of seafood restaurants and souvenir stores.

*Nob Hill & Russian Hill (map). Two ritzy neighborhoods with panoramic views, and the historic cable cars which still climb the steep streets of the area. Just to the north is Russian Hill, a quieter residential area most well known for its pleasant walks and the famous crooked section of Lombard Street (map).

*Chinatown / North Beach (map). Two vibrant immigrant communities; the crowded and largest Chinatown outside of Asia next to the stylish laid back ‘Little Italy’, as well as Telegraph Hill (map) and Coit Tower (map).

*Western Addition (map). Here you’ll find some of the more notable examples of Victorian architecture in a city full of them, namely the “Painted Ladies” (map) of Alamo Square (map), one of the city’s most famous landmarks, as well as the historical centers of the city’s Japanese and African American communities, with lovely shops and restaurants reflecting the area’s heritage.

*Mission (map). This vibrant area is home to a large Hispanic community as well as new urban artisans, and is a center of San Francisco night life. For visitors wishing to get off the beaten tourist paths and catch some local flavor, this is the place to go.

You can find maps that include hiking trails, bikeways, and the grade pitch of all streets marked in varying colors by how steep each segment is, that can help you orient to city walks suitable to your ability and temperament, such as the downloadable map issued by the San Francisco Bicycle Coalition.

The best time to visit San Francisco is late September through October, when it is relatively the warmest. All year long, it never gets too cold for winter clothing, and it rarely gets warm enough for shorts and sandals. Fall in particular is a good time to visit because the summer wind & fog has mostly gone, but the rainy season has not yet started.

The areas that one should be most cautious are in the neighborhoods of Bayview-Hunters Point, Visitacion Valley, Sunnydale, Ingleside, and Potrero Hill in Southeast San Francisco, as well as the Tenderloin, parts of Western Addition (including the Fillmore District), and parts of the Mission.

Tobacco smokers beware: as in the rest of California, smoking is illegal in bars, restaurants, and other public places. On the other hand, smoking marijuana is remarkably well-tolerated.

San Francisco is now widely considered the most important city in the world for new technology startups (crunchbase.com).

Muni | SFMTA – The main public transport system that you will use to travel around the city. For fare you need Clipper card.

+ HOW TO GET AROUND SAN FRANCISCO (sftravel.com)

AMTRAK | eTicketing | Interactive Map. Some of the most scenic routes include the California Zephyr that runs between *Emeryville (map) in the San Francisco Bay Area of California to Chicago and the Empire Builder that goes from Chicago to Seattle or Portland. (*Rail travel in the United States)