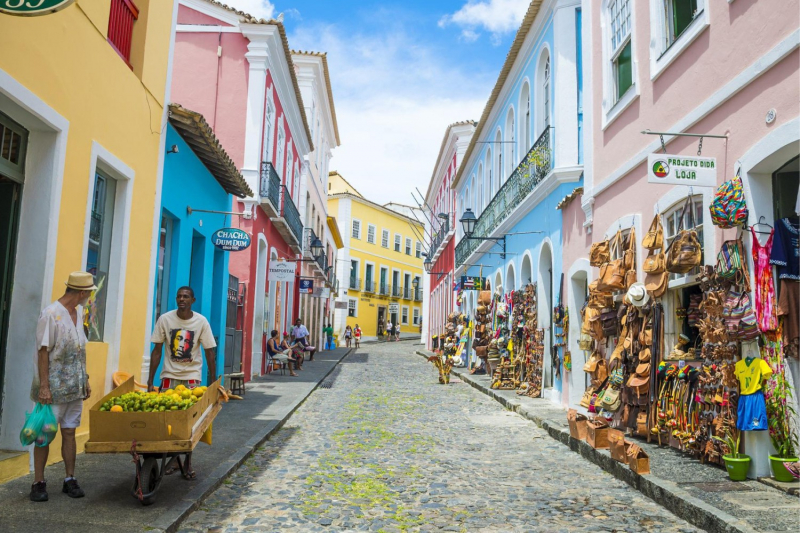 Salvador (map) is the capital of the state of Bahia. With a charming *Historic Center of Salvador (a World Heritage Site), a vibrant musical scene and popular Carnaval celebrations, it is considered one of the birthplaces of Brazilian culture. It is the biggest city in the Northeast region, and was the first capital of Brazil.

To understand Salvador you need to be open minded; there are millions of tourists every year flocking to Salvador to enjoy in its beaches. Parts are best explored on foot, such as dense historical areas including the Pelourinho (map) and the Lacerda Lift (map), the first urban lift in the world, and the Mercado Central.

The old city center can be easily explored on foot. To get between the upper and lower sections, take the Elevador Lacerda or the cable car, remember to take small change. The streets between the two are considered dangerous even during the day.

!  Salvador is notorious for street crime, and for a tourist that wanders carelessly in the streets, the likelihood of a mugging or armed robbery is considerably higher than in São Paulo and perhaps even Rio de Janeiro.

A 100-m cliff runs along the entire bayshore, dividing the city into Cidade Alta (map), up on the cliff, and the Cidade Baixa down by the bay. The former features Pelourinho, the old city center that packs historical sites, colonial architecture, museums, restaurants, bars, hostels, artisanal shops, and music/dance/capoeira academies into a convenient, albeit tourist-swarmed, set of winding cobblestone streets.

Outside of this area, there are many beach districts that stretch from the tip of the peninsula northeast along the Atlantic coast.

At the center of the Cidade Alta there are the two large squares Praça da Sé and the Terreiro de Jesus (map) which are connected at the corner by the cathedral (map). The latter is probably the most lively part of town, with food carts and stalls through the day and revealers in the evening hours.

Largo do Pelourinho (map). A fairly small triangular plaza, is among the oldest parts of town. You can guess from its name meaning “plaza of the pillory” what went on around there.

Mercado Modelo (map). The city’s main market located in the lower town is and a good place for crafts and other souvenirs. In the adjacent square you can often see young men performing capoeira, the famous martial arts dance which originates from the area.

Igreja do Nosso Senhor do Bonfim (map). A small church located in a neighborhood to the north, is one of the most popular pilgrimage sites in all of Brazil.

Most visitors head for the coastal neighbourhoods that cluster around where the bay meets the ocean. Salvador, Brazil has a tropical climate including rainforests and lush vegetation.

One of the main attractions in Salvador is the Carnaval (*Bahian Carnival). Salvador’s giant Carnaval, the biggest of the world, according to the Guinness book of records, lasts for one week and is extremely popular with Brazilians and tourists alike. The event happens in mid-February and consists of parades, live entertainment, music, dancers and vendors.

With lots of sun and heat throughout the year, your concern as a tourist will just escape the rainy season, which lasts from April to June.

How to get to Salvador? (salvadordabahia.com)

City buses, as in other Brazilian cities, are constant and confusing. If you are trying to make your way out of Pelourinho, you can either take the Elevador Lacerda down to the Comercio and find buses for just about every route, or walk to the Praca da Sé bus stop just south of the elevator.

BUS >   Salvador’s long-distance bus station is in the middle of the new city, 14km from downtown. Salvador is accessible via scheduled buses from all around the country and from Paraguay.

AIRPORTS >   Salvador’s Deputado Luis Eduardo Magalhães International Airport (map). is one of Brazil’s main airports. All of the biggest Brazilian airlines have flights to the Bahian capital city. The city also receives flights from the main hubs of Europe, South America and the United States. There is a subway station easily reached by a free bus shuttle from the terminal.