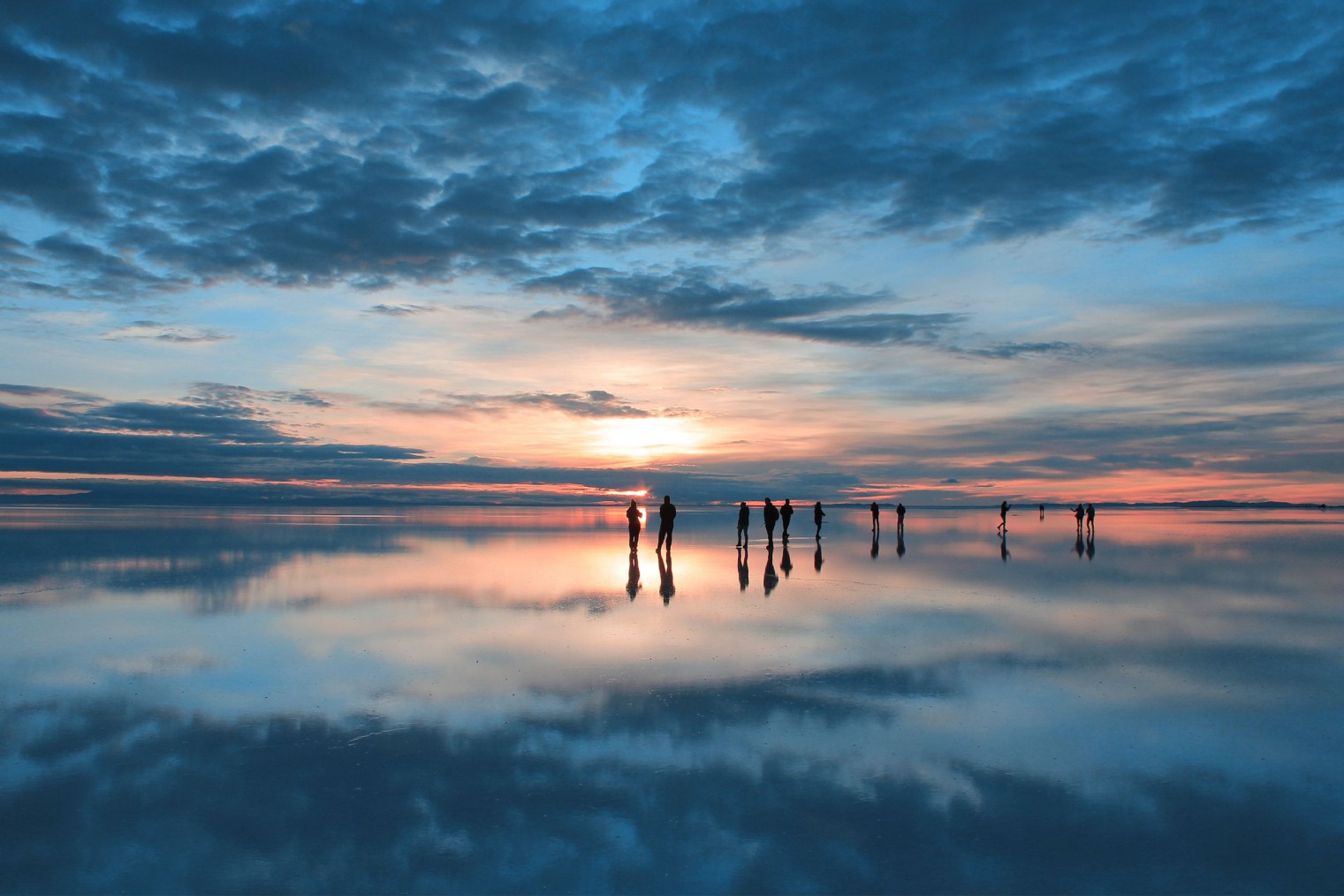 Salar de Uyuni (map) is the largest salt flat in the world and one of the most amazing natural attractions of Bolivia.

The flats cover an area of over 10,000 km² and to see the best parts, you’ll need to cover quite some ground. While it’s possible to explore this unique piece of land on your own, most visitors opt for organized tours along some of the best sights.

Thanks to the sedimented salt, the area is perfectly flat – which is often used for various technical purposes (testing of vehicles and the like). In the middle is Isla del Pescado (map) – a volcanic rock. It provides great views and is a natural reservation.

There isn’t much flora, mostly just grass and bush. The Isla del Pescado is covered by an ancient cacti forest – cacti like Echinopsis atacamensis pasacana and Echinopsis tarijensis, which grew up to 12 meters high. The cacti grow at pace of 1cm per year, hence their age is up to 1000 years.

Very little rain happens in the area, but yearly flooding occurs, mostly in January. At that time the whole area changes to a world’s highest altitude mirror.

Temperature peaks at 21°C in November-January, and 13° in June. Nights are cold all through the year, -9 to 5°C. Rainfall outside January is almost non-existent.

Dress in layers. Parts of the Salar are very windy, and temperature drops at sunset. Also, make sure to bring sunscreen and lip balm, as the sun is very bright due to the high altitude, and sunlight can reflect off of the salt. A hat is a good idea too, but make sure it doesn’t blow away!

No fees or permits are required to enter the salt flats itself, but the vast majority of visitors come on an organized tour. Standardized car-tours are the most common way of visiting the salt flat. Because of the sheer area size and hostility of the environment, moving by feet or even bicycle is not easy.

Most organized tours start in *Uyuni (map) – usually Uyuni Plaza Arce. For independent travellers on a budget it’s possible to hop on a local bus from Uyuni to Colchani, which crosses the salt flats, and ask the driver to let you out where you want to be.

Alternatively, you can start your trip from *Tupiza (map). Tour prices are more or less the same as in Uyuni, but tours starting from here often include more lakes and interesting rock formations. Because this option is less popular, you probably won’t encounter as many other tourists on your tour.

Laguna Hedionda (map). A lagoon where the flamingos can be observed.

Laguna Celeste (map). A lake at the foot of the Uturuncu volcano (map), called according to the color of its clear blue water (caused by magnesium and manganese). Andean flamingos feed and form large flocks here.

BUS >  Bus transportation in Bolivia is a nice cheap way to get to see the beautiful scenery while traveling to your destination. Unfortunately the buses often travel solely at night. Buses generally do not need to be booked ahead, especially for common distances served by many companies.