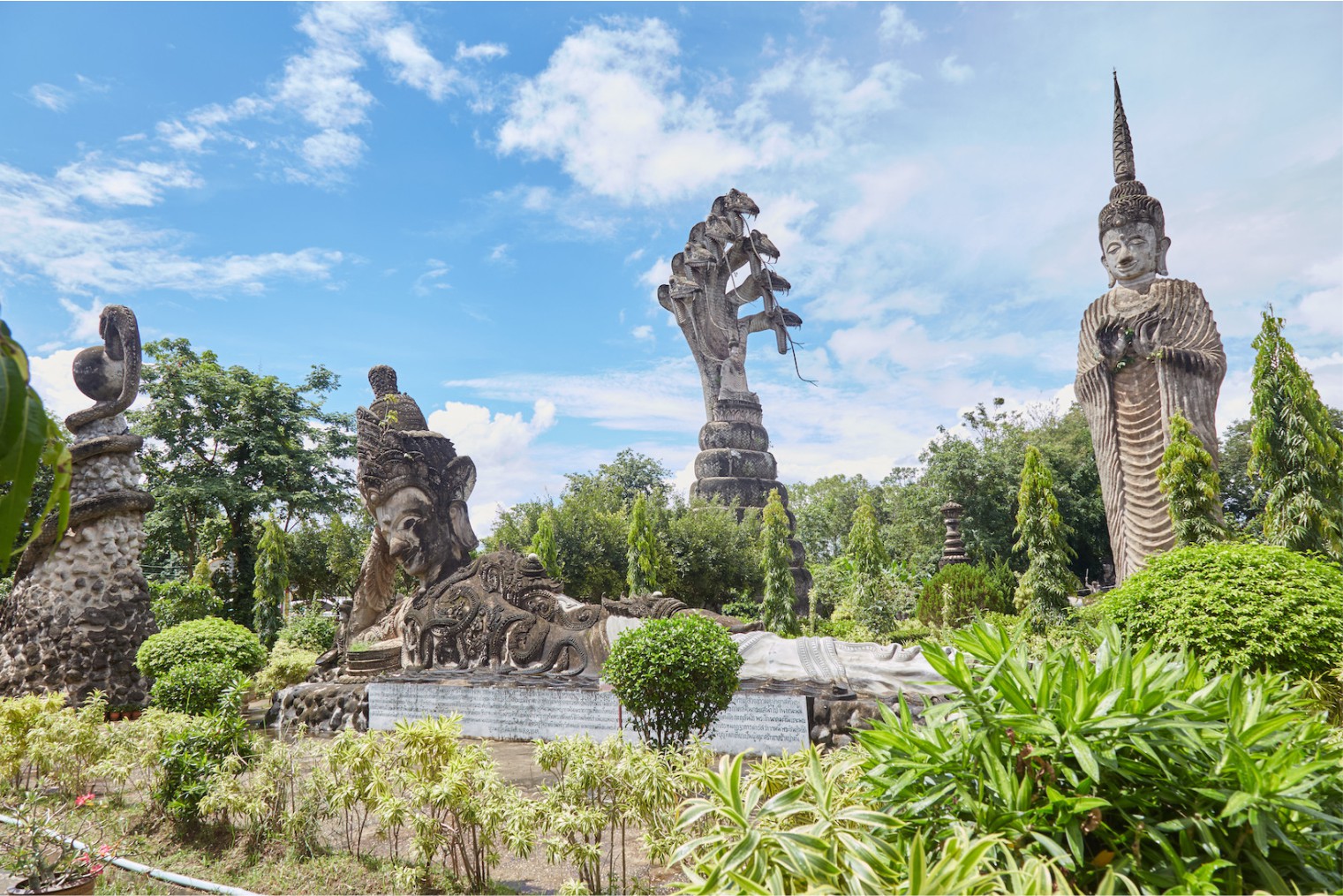 Sala Keoku (map), alternative name: Wat Khaek, is a park featuring giant fantastic concrete sculptures inspired by Buddhism and Hinduism. It is located near *Nong Khai, Thailand in immediate proximity of the Thai-Lao border and the Mekong river.

It shares the style of Sulilat’s earlier creation, Buddha Park (map) on the Lao side of Mekong, but is marked by even more extravagant fantasy and greater proportions.

Some of the Sala Keoku sculptures reach 25m. Those include a monumental depiction of Buddha meditating under the protection of a seven-headed Naga snake.

Perhaps the most enigmatic part of the park is the Wheel of Life, a circular multi-part group of sculptures representing the karmic cycle of birth and death through a progression of tarot-like characters. The composition culminates with a young man taking a step across the fence surrounding the entire installation to become a Buddha statue on the other side.

Known as the Naga City and famed for its lovely position on the Mekong, Nong Khai is a bustling Thai town and the gateway to Laos and Vientiane. It has many beautiful features which attract a considerable number of Thai and foreign visitors every year, including the truly extraordinary *Phu Phra Bat Historical Park (though in Udon Province it is easily reached from Nong Khai); and the Thai-Lao Indochina Market (map) called Tha Sadet Market which occupies many streets in the centre of town. A large part of the centre of town, including the river bank, has been made pedestrian-only.

Nong Khai is an exemplar of Isaan culture, which dominates northeast Thailand and which has an identity distinct from the culture of the centre, north, and south of Thailand. Famed for its warmth, kindness and friendliness, the culture has evolved from its Thai and Lao roots.

BUS >   The only mode of public transport in the city is tuk-tuk. They remain inexpensive at 20-30 baht/person to anywhere around the city centre. Green Bus Corporation • Nakhonchaiair Co., Ltd. • Phetprasert • Sombat Tour Co., Ltd. (*List of bus routes in Bangkok)

RAIL >   Nong Khai is the terminus of the northeastern railway line from Bangkok via Khon Kaen and Udon Thani. The trip takes 10-12 hours. Sleepers often sell out at peak times so you may need to book in advance.