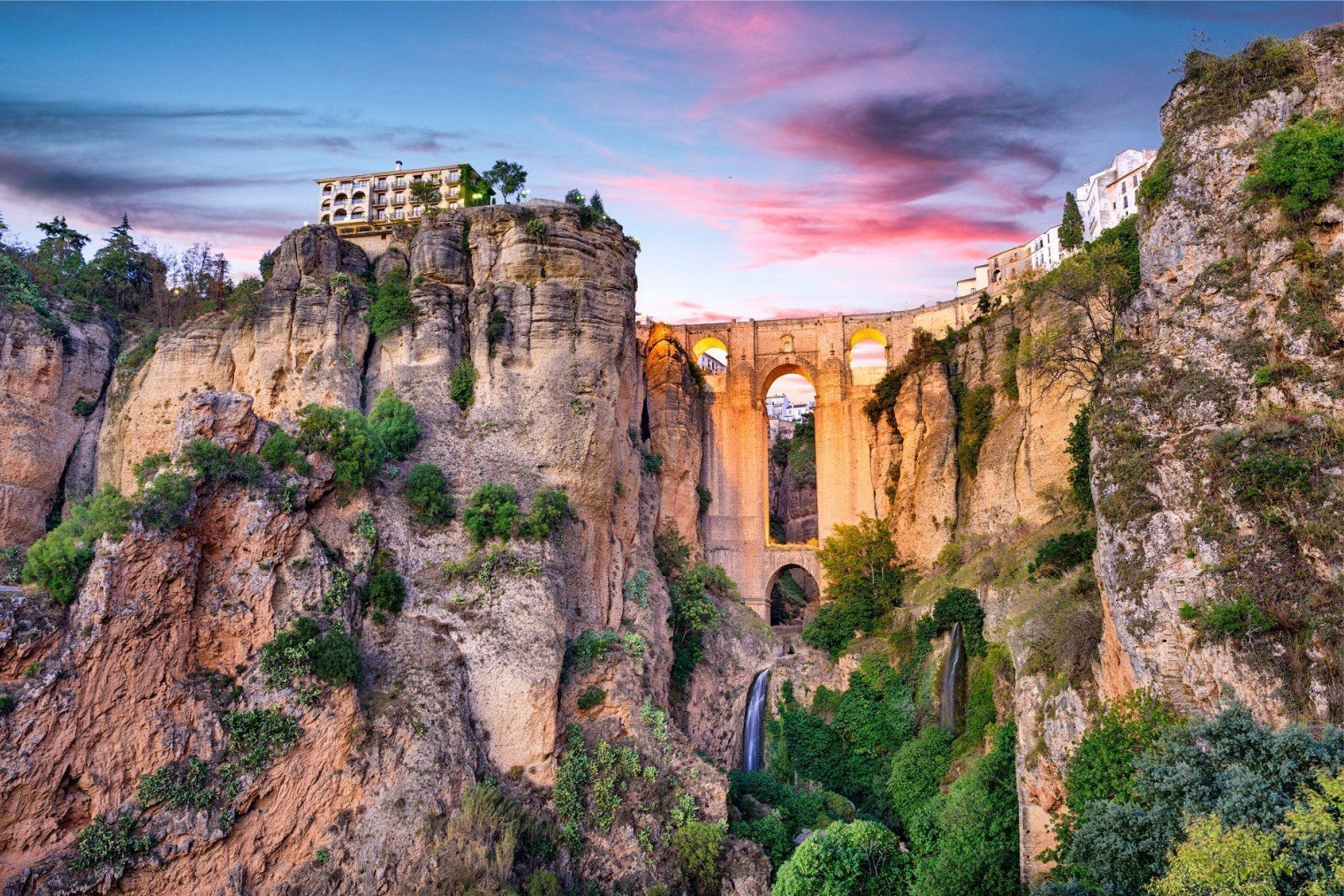 Ronda (map) is a town in province of *Málaga. It is located about 105 km (65 mi) west of the city of Málaga. It is now one of the towns and villages that is included in the Sierra de las Nieves Natural Park.

The relaxing atmosphere here is a great break from some of the more tourist-ridden places on the south coast of Spain, however it can still be packed with day-trippers from the Costa del Sol, especially during the peak summer months.

It was the hometown of the polymath *Abbas Ibn Firnas (810–887), an inventor, engineer, alleged aviator, chemist, physician, Muslim poet, and Andalusian musician. The Islamic domination of Ronda ended in 1485.

Plaza de Toros (map) closed on bullfighting days in September. The oldest and one of the most highly regarded of Spain’s bull rings, built in 1785 in the neoclassical style. This is considered to be the cradle of modern Spanish bullfighting, where *Pedro Romero (1754-1839) developed a new style of fighting bulls on foot (and not from horseback as had been done previously); he also was the first to begin using a red cloth.

*Puente Nuevo “New Bridge” (map), span the canyon. The Puente Nuevo is the tallest of the bridges, towering 120 m (390 ft) above the canyon floor, and all three serve as some of the city’s most impressive features. The former town hall, which stands next to the Puente Nuevo, is the site of a parador and has a view of the Tajo canyon.

Avoid the restaurants in the tourist area during the day, as they are overpriced and often only full of other tourists! Look for smaller cafes and bars. If you are looking for an inexpensive snack or lunch, any bar will be able to make you a sandwich (bocadillo) with your choice of ham, cheese, or tomato. Also, look for bakeries (pastelerias), as Spain has some of the finest pastries around.

There are a number of hiking trails around Ronda, including eight with trailheads beginning in Ronda. The tourist information office carries maps and trail descriptions. One of the most popular routes is Route 3 (SL-A 38), which descends to the bottom of the Tajo Gorge passing by several excellent viewpoints of the Puente Nuevo. (A word of caution is advised, though, as if there is an extended dry spell, the gorge can stink because sewage is still released into the river.)

A direct train from Madrid to Ronda operates twice daily. Always check whether the bus or the train is more convenient. The least expensive way to get around most parts of Spain is by bus.