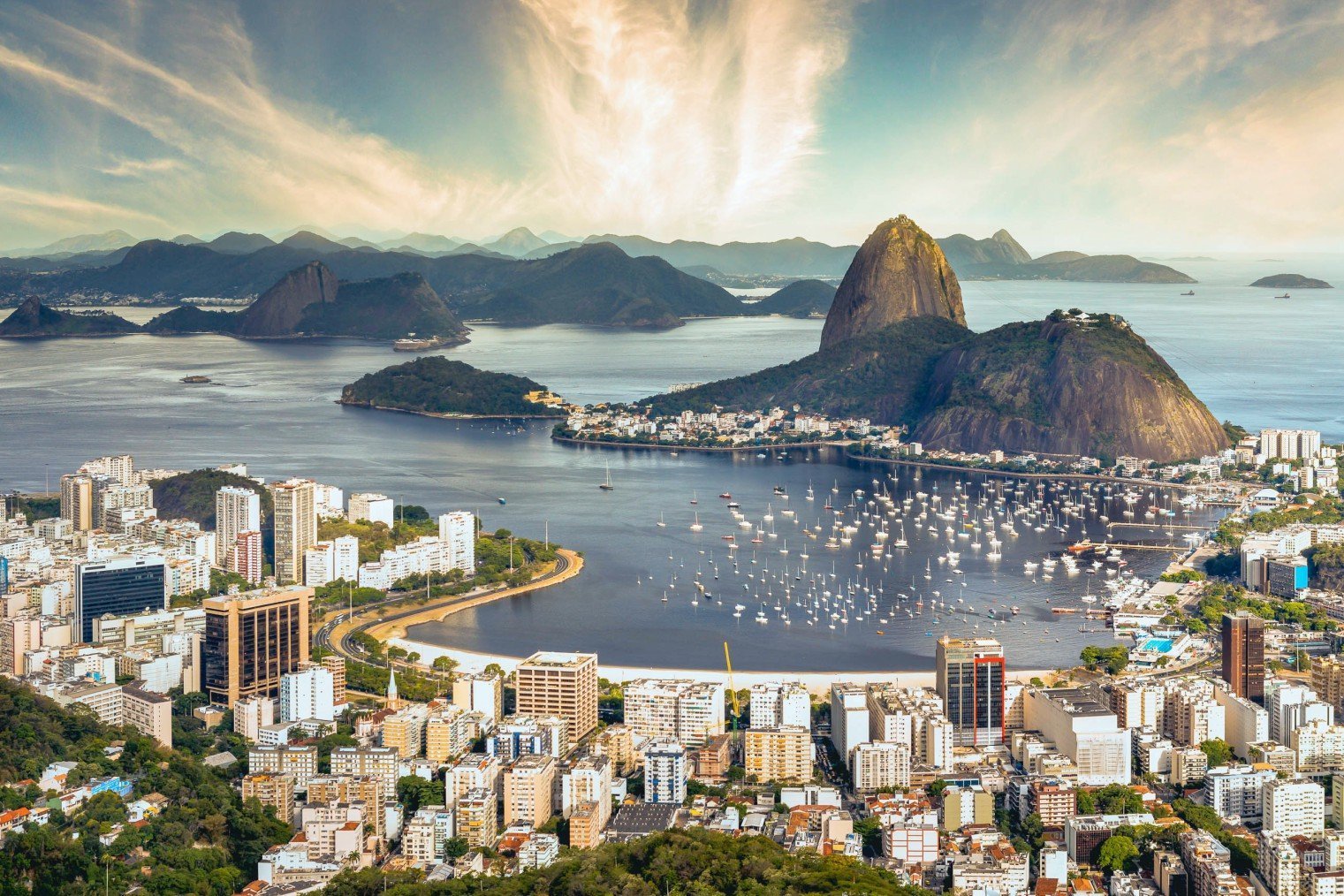 Rio de Janeiro or simply Rio, is the capital of the state of Rio de Janeiro and the second-most populous municipality in Brazil. Part of the city has been designated as a World Heritage Site, named “Rio de Janeiro: Carioca Landscapes between the Mountain and the Sea“.

Rio is one of the most visited cities in the Southern Hemisphere and is known for its natural settings, Carnival, samba, bossa nova, and balneario beaches such as Barra da Tijuca (map), *Copacabana (map), *Ipanema (map), and *Leblon (map).

In addition to the beaches, some of the most famous landmarks include the giant statue of *Christ the Redeemer (map) atop Corcovado mountain, named one of the New Seven Wonders of the World; *Sugarloaf Mountain with its cable car (+ bondinho.com.br).

In 1808, when the Portuguese Royal Court transferred itself from Portugal to Brazil, Rio de Janeiro became the chosen seat of the court of Queen Maria I of Portugal. This is one of the few instances in history that the capital of a colonising country officially shifted to a city in one of its colonies.

Rio de Janeiro subsequently served as the capital of the independent monarchy, the Empire of Brazil, until 1889, and then the capital of a republican Brazil until 1960 when the capital was transferred to Brasília. Many historic churches, such as the *Candelária Church (the former cathedral, map).

Around the *Cinelândia square (map), there are several landmarks of the Belle Époque of Rio, such as the *Municipal Theatre (map) and the *National Library building (map).

Among its several museums, the Museu Nacional de Belas Artes (National Museum of Fine Arts, map) and the Museu Histórico Nacional (National Historical Museum, map) are the most important.

*Centro (map) or Downtown is the historic core of the city, as well as its financial centre. Sites of interest include the *Paço Imperial (map), built during colonial times

The city has parks and ecological reserves such as the Tijuca National Park (map), the world’s first urban forest and UNESCO Environmental Heritage and Biosphere Reserve. Pedra Branca State Park (map), which houses the highest point of Rio de Janeiro, the peak of Pedra Branca; Parque Lage (map); and the *Passeio Público (map), the first public park in the Americas.

In addition the *Flamengo Park (map) is the largest landfill in the city, extending from the center to the south zone, and containing museums and monuments, in addition to much vegetation.

Every 31 December, 2.5 million people gather at Copacabana Beach (map) to celebrate New Year’s in Rio de Janeiro. The crowd, mostly dressed in white, celebrates all night at the hundreds of different shows and events along the beach. It is the second largest celebration only next to the Carnival.

BUS >   In Rio de Janeiro, buses are the main form of public transportation. rioonibus.com. Busca Ônibus | Bus Stations (*Bus transport in Rio de Janeiro). Most popular lines for tourists are 583 and 584 (from Copacabana and Ipanema to Corcovado railway station), as well as 464 and 435 (from Copacabana to Maracanã). Buses 511 (Ataulfo de Paiva) and 512 (Bartholomeu Mitre) are also popular as they take you to Urca for the station to take the cable car up the Sugarloaf mountain.

WATERWAYS >   In northern Brazil, it is possible to travel many distances by boat. In fact, the boat is the main and most accessible means of transport to get around the Amazon, since the Amazon Forest is cut by many rivers and some cities are inaccessible by road. The best boat services in the country are in the Amazon, where you can ride on speedboats and comfortable yachts or small wooden boats. grupoccr.com.br

Culture of Brazil (wiki) of Brazil