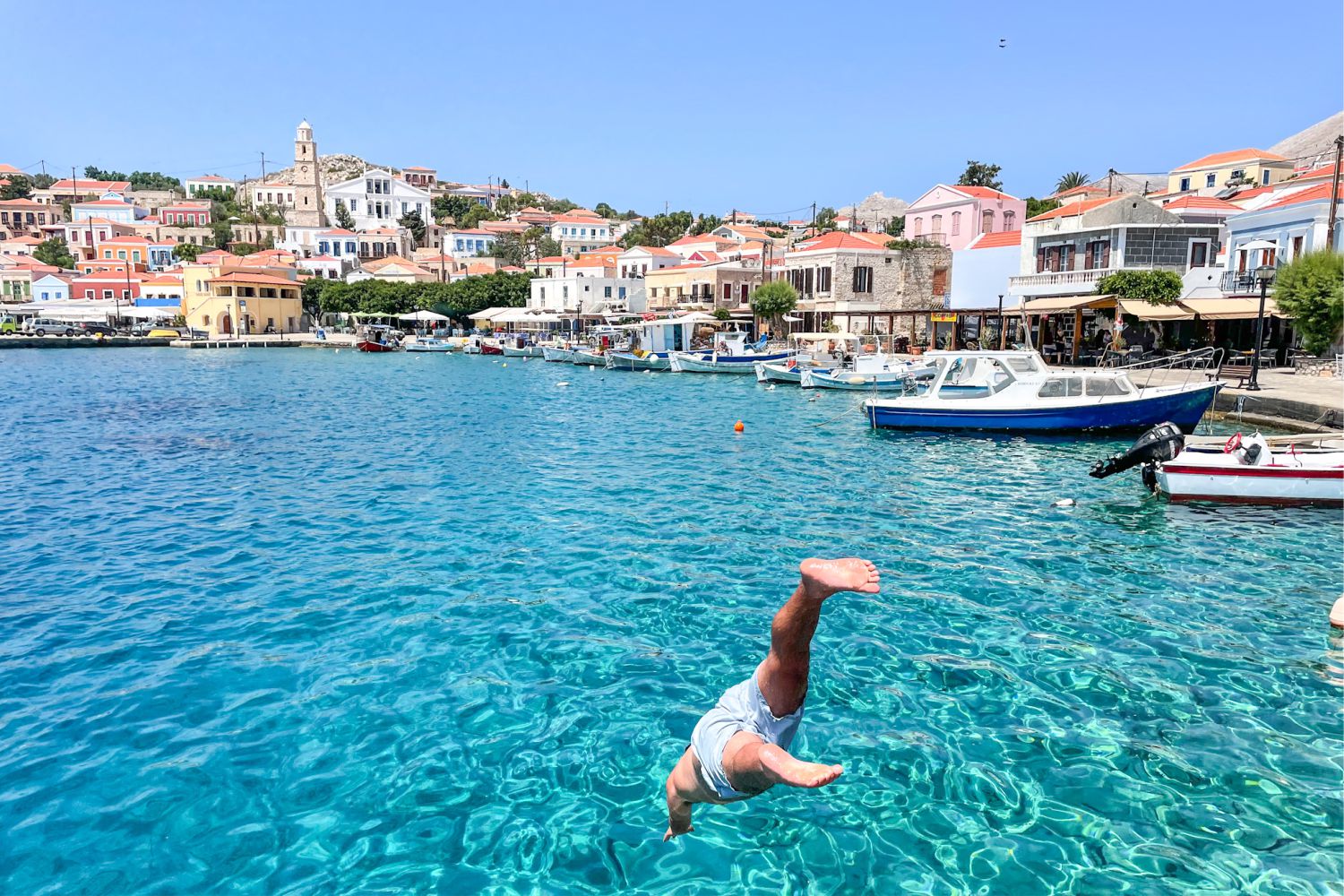 Rhodes Island (map) is one of the largest and most fertile of the Greek Islands, and is one of the most visited because of its combination of beaches, archaeological sites, and extensive medieval town. The climate is particularly good, with the weather typically sunny and mild.

While the northern coast is renowned for its lively tourist resorts the south offers tranquil beaches and a slower, more simple pace of life.

*Rhodes (city, map) is the largest settlement and capital city of the island of the same name. It is famous as the former site of the Colossus, one of the seven wonders of the ancient world, and as the oldest inhabited medieval town in Europe.

WHAT TO SEE • WALKING & TREKKING

Rhodes is situated 363 km (226 mi) east-southeast from the Greek mainland, and 18 km (11 mi) from the southern shore of Turkey. Rhodes is a major tourist attraction for the seekers of sunny beaches. While many of its beaches are gravel, not sand; the island can boast 300 or more sun days in a year.

Rhodes Old Town (map), still enclosed by its medieval wall. 6000 people live and work in the same buildings the Knights of St. John lived 6 centuries ago. Medieval buildings, mosques, traditional fountains, oriental motifs, Byzantine and Gothic churches, shops and cafeterias are scattered throughout the Old Town of Rhodes. There are approximately 200 streets or lanes that have no name, so getting lost is a distinct possibility. >> *Fortifications of Rhodes

*Palace of the Grand Master of the Knights of Rhodes (map). The first floor (photos prohibited) contains some artifacts of Ancient Rhodes but is closed – in it’s absence, the entrance fee is entirely not worth it. The Archaeological Museum (map) offers more selection and allows photos. Second floor has a variety of later “artifacts” such as mosaics from Kos and other odd bits and bobs, but it has almost no descriptions (probably to force people to wait for a tour guide).

*Faliraki (map) – Rhodes’ action resort. Go there to party, everything else is better somewhere else. The hotels north from Faliraki are much quieter. Hotels near the water park do not interest clubbers, and are really family friendly. Nice beaches, a lot less winds than on the west coast and really good public transport.

*Gennadi (map) – around 64 km from Rhodes Old Town and nearby to Prasonisi, attracts several keen surfers. Among the last unspoiled stretches of coastline left on Rhodes.

BUS >   rodospublictransport.gr – All public bus lines radiate from Rhodes town and reach almost every relevant place throughout the island.

The state train company is Trainose (Τραινοσέ). Trains are a better way to get around, but the national rail system is extremely limited. You can get almost anywhere in Greece by bus, but some isolated villages may only have one or two buses per day >> KTEL BUS.

How to travel by bus around Greece | visitmeteora.travel + Ktel Buses in Greece & the islands | greeka.com

WATERWAYS >   Rhodes is accessible via ferry from Symi, Tilos, and Bodrum, Fethiye, Datca and Marmaris (marmarisferry.com) in Turkey. > ferries.gr

The frequency, reliability and availability of Greek ferries are largely dependent upon the time of year. For instance, during the winter off-season (January to March), the weather on the Aegean can be extremely rough and boats are often kept in port for days at a time. > nisea.co