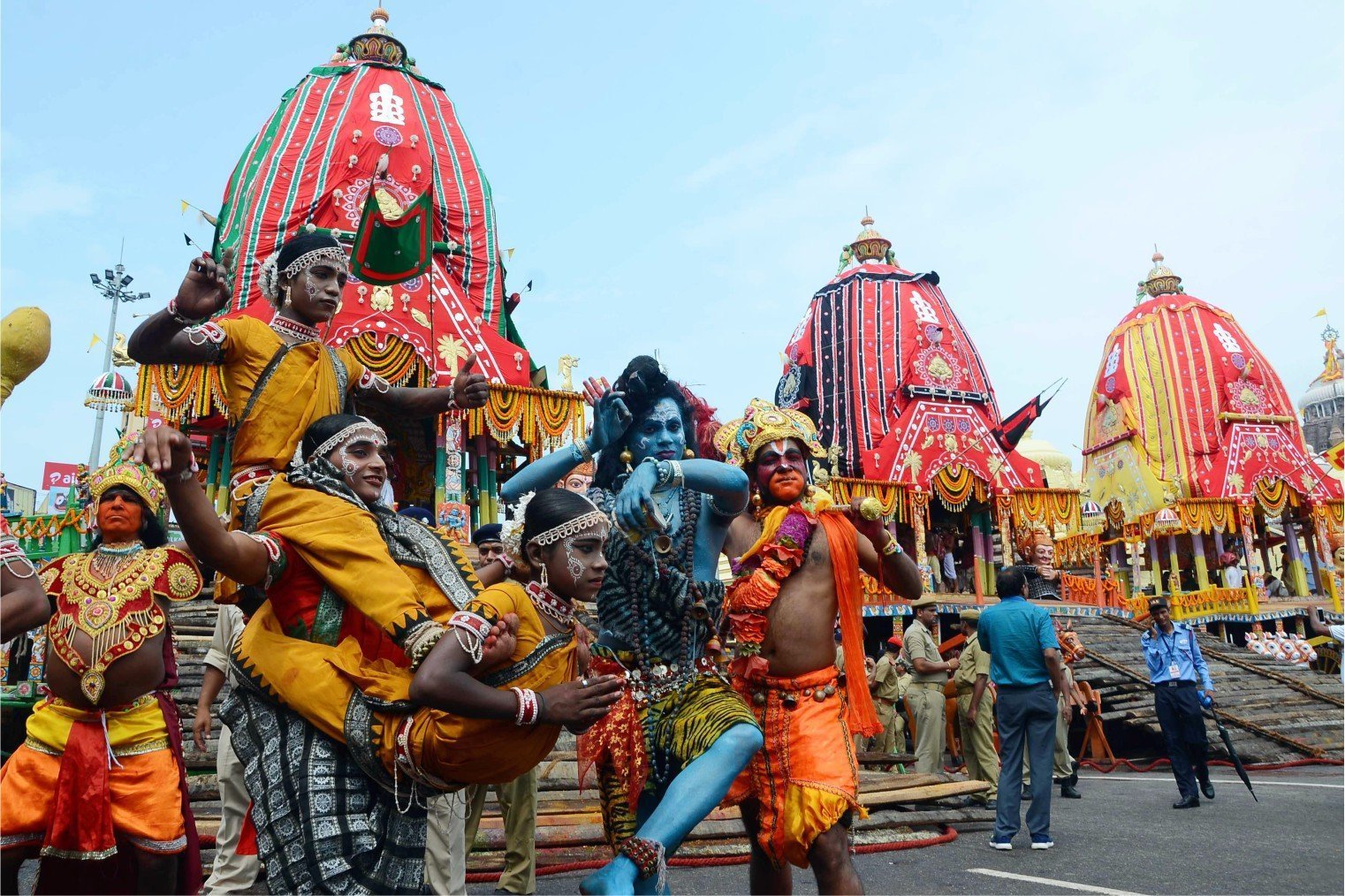 Ratha Yatra (Car Festival or Chariot Festival) is celebrated every year at *Puri, the temple town in *Odisha. Rath Yatra or Jatra is the celebration of the Lord Jagannath, who is believed to be the Lord of Universe’s journey towards his aunt’s house.

The presiding deities of the Jagannath Temple, Puri’s main temple, Lord Jagannath, Lord Balabhadra and Goddess Subhadra, with the celestial wheel- Sudarshana Chakra are removed from the temple in a ceremonial procession to their chariots.

The huge, colourfully decorated chariots are drawn by multitude of devotees on the bada danda, the grand avenue to the Gundicha Temple (Gundicha– King Indradyumna’s Queen), two miles away to the North. On the way the chariot of Lord Jagannatha, Nandighosa (ନନ୍ଦିଘୋଷ) waits near the crematorium of Bhakta Salabega (ଭକ୍ତ ସାଲବେଗ), a Muslim devout to pay him tribute.

On their way back from the Gundicha Temple, the three deities stop for a while near the Mausi Maa Temple (Aunt’s abode) and have an offering of the Poda Pitha, which is a special type of pancake supposed to be the Lord’s favourite. After a stay for seven days, the deities return to their abode.

Jagannath Puri (map) or Purusottama Puri is a pilgrimage town with the famous temple of Jagannath (means Lord of the Universe) and is a major tourist destination with all its beautiful and pleasant sights.

Puri is a very popular holiday resort for people from all over India but they tend to stay in the hotels nearer to Swargadwar (rather than C.T. Road). These hotels are often affordable and offer quality services at very reasonable rates.

!  *Konark Sun Temple (map) is a 13th-century CE (year 1250) Sun temple at Konark about 35 kilometres (22 mi) northeast from Puri. Declared a UNESCO world heritage site in 1984, it remains a major pilgrimage site for Hindus, who gather here every year for the Chandrabhaga Mela around the month of February.