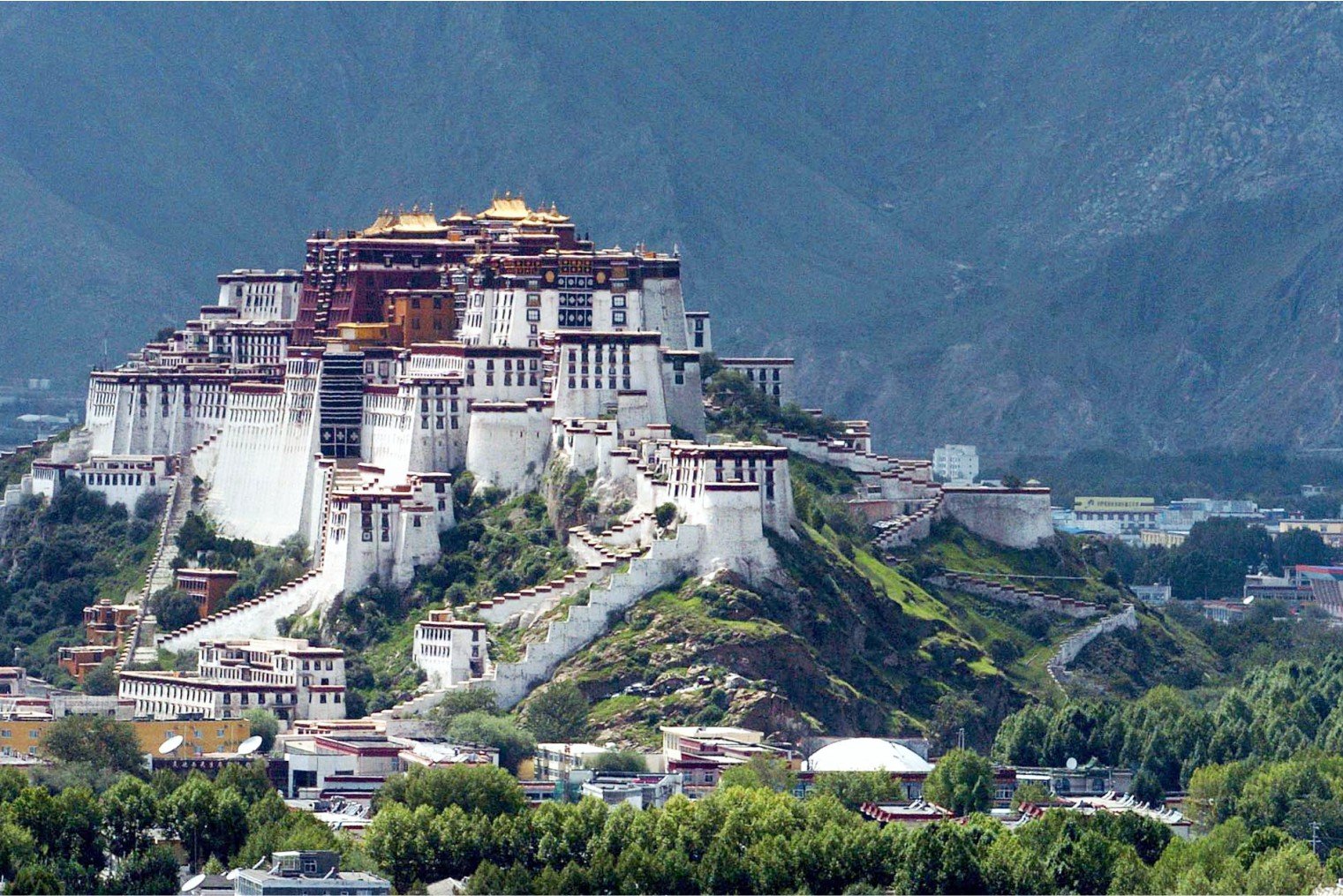 The Potala Palace (map) is a dzong fortress in the city of Lhasa, Tibet Autonomous Region, China. It was the winter palace of the Dalai Lamas from 1649 to 1959, has been a museum since then, and has been a World Heritage Site since 1994.

A stronghold probably existed on Red Hill as early as the 7th century AD when King Songtsen Gampo built a fortress on it for his two foreign wives. As the religious and political centre of old Tibet and the winter residence of Dalai Lamas, the palace witnessed the life of the Dalai Lamas and the important political and religious activities in the past centuries.

Non-Chinese nationals are required to obtain a special permit and must have a tour guide to visit Tibet. Tibet is sometimes described as the “roof of the world”; the entire region is on a high plateau and there are many large mountains. The area has its own unique culture. Entering Tibet you feel as though you’ve found an entirely different world.

With over 1,000 rooms, the Potala contained the living quarters of the Dalai Lamas while they lived, and their sumptuous golden tombs when they died. Potala Palace also houses great amounts of rare cultural relics including the gold hand-written Buddhist scriptures, valuable gifts from the Chinese emperors and a lot of priceless antiques.

Guided palace tours generally include one hour inside the palace; allow at least that much time to walk up and down the many steps leading up to and from the palace. The palace is 14 stories tall and any visit involves climbing a lot of stairs up/down. Make sure you are fully acclimated before visiting.

Barkhor Street. A circular street around the Jokhang Temple in the center of the old section of Lhasa, it is the oldest street in a traditional style in Tibet, where you can enjoy bargaining with vendors for local handicrafts. Barkhor Street is one of the most important religious paths along which pilgrims walk around Jokhang Temple. Buddhist pilgrims walk or progress by body-lengths along the street clockwise every day late into the night.

Drepung Monastery. Founded in 1416 by a disciple of Tsong Khapa, was the biggest and richest monastery in Tibet and its lamas helped to train each new young Dalai Lama. Drepung was also home to the Nechung, the state oracle.

BUS >   Non-Chinese nationals are not allowed to ride the intercity buses in Tibet. A coach or bus in rural China is a different experience. City buses vary from city to city. However, if you can understand the bus routes then they are cheap and go almost everywhere.

AIRPORTS >   Lhasa Gonggar Airport is 40-60 minutes away from Lhasa on a spiffy 4-lane highway that burrows directly through nearby hills. Non-Chinese nationals are required to be met at the airport by their tour guide.