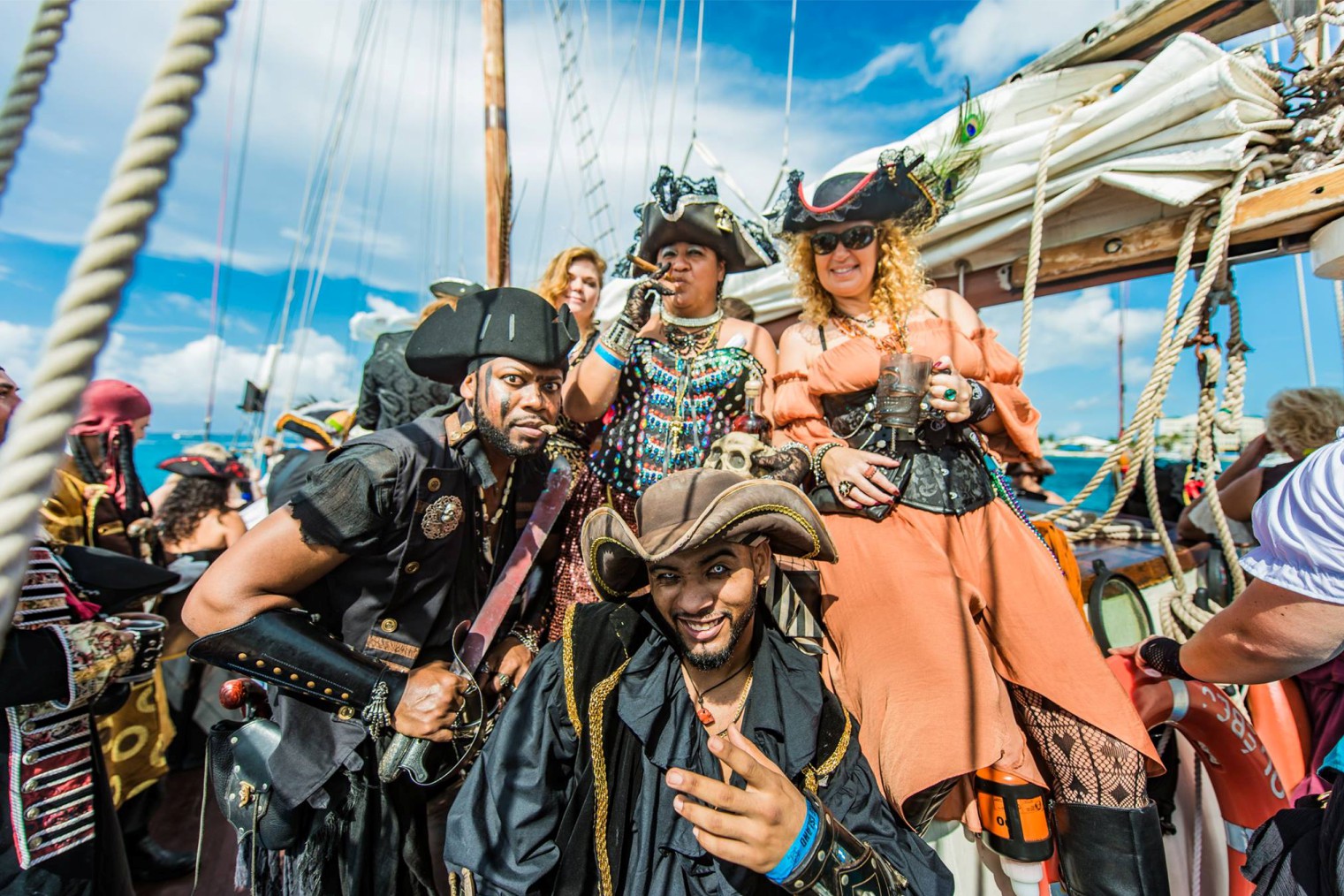 The Pirates Week Festival is the biggest annual event in the Cayman Islands, drawing over 35,000 patrons each year. During this time the islands are transformed into a mass of colour and revelry, with more than 30 events hosted over three weekends, across all three islands!

The festivities usually start off in Cayman Brac on the first weekend of November, then move to Grand Cayman during the second weekend, and finish in Little Cayman on the third weekend.

The most famous of the Pirates Week festivities is the Landing Pageant and Float Parade, which takes place in the capital of George Town in Grand Cayman. Thousands of spectators line the streets to watch a mock take-over of the island by a band of fighting pirates, who come ashore by pirate ship! This is followed by a glittering parade, street dances, and fireworks.

The Cayman Islands (map) are a self-governing British Overseas Territory, in the western Caribbean Sea. The 264-square-kilometre (102-square-mile) territory comprises the three islands of Grand Cayman, Cayman Brac and Little Cayman, which are located to the south of Cuba and northeast of Honduras, between Jamaica and Mexico’s Yucatán Peninsula. The capital city is George Town on Grand Cayman, which is the most populous of the three islands.

One of Grand Cayman’s main attractions is Seven Mile Beach (map), site of a number of the island’s hotels and resorts. Named one of the Ultimate Beaches by Caribbean Travel and Life, Seven Mile Beach (due to erosion over the years, the number has decreased to 5.5 miles) is a public beach on the western shore of Grand Cayman Island. Historical sites in Grand Cayman, such as *Pedro St. James Castle (map) in Savannah, also attract visitors.

The most popular area to do this is *Stingray City, Grand Cayman. Stingray City is a top attraction in Grand Cayman and originally started in the 1980s, when divers started feeding squid to stingrays. The stingrays started to associate the sound of the boat motors with food, and thus visit this area year round.

The Caymans have historically been a tax-exempt destination, and the government has always relied on indirect and not direct taxes. The territory has never levied income tax, capital gains tax, or any wealth tax, making them a popular tax haven.

The Cayman Islands has a tropical wet and dry climate, with a wet season from May to October, and a dry season that runs from November to April. Seasonally, there is little temperature change.

Car rentals are readily available. You must be 21 years old to rent a car. Driving is on the left hand side of the road and seatbelt use is mandatory. Visitors must get a temporary driver’s licence from the police station or car rental agency. This is obtained by showing a valid drivers licence from their home country, and paying a US$8 fee.

WATERWAYS >   *George Town on Grand Cayman is a popular port for cruise ships.

Culture of the Cayman Islands (wiki)

Cuisine of the Cayman Islands (wiki)