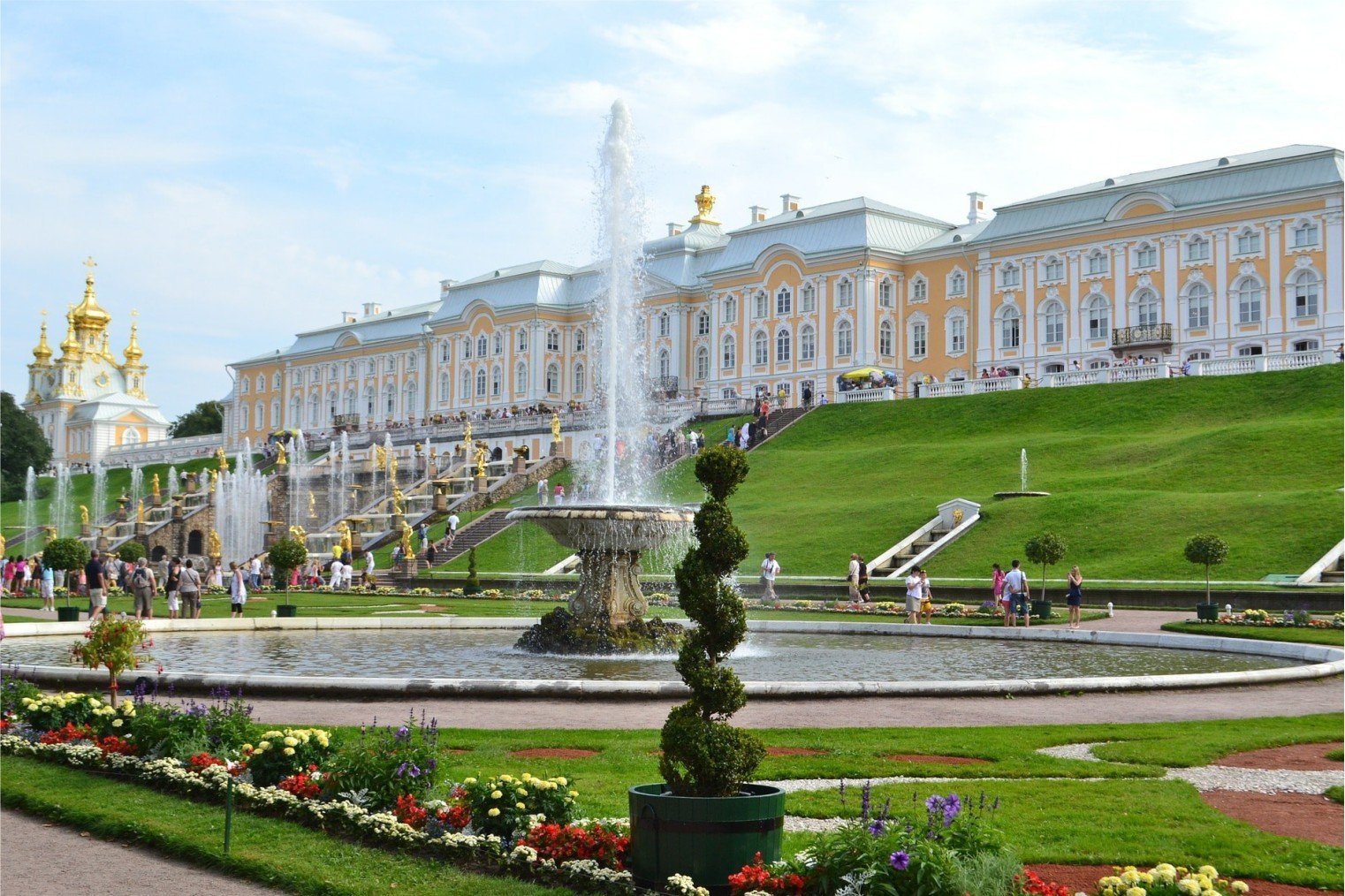 Peterhof (map) is famous for its a series of palaces and gardens known as the Peterhof Palace (map), laid out on the orders of Peter the Great, and sometimes called the “Russian Versailles”, but also for the “Petrodvorets Watch Factory – Raketa” (map), a 300-year-old Russian watch manufacture.

The palace-ensemble along with the city center is recognized as a UNESCO World Heritage Site. The architect between 1714 and 1728 was *Domenico Trezzini, and the style he employed became the foundation for the Petrine Baroque style favored throughout Saint Petersburg.

The area was extensively damaged during World War II during occupation by Nazi Germany. Reconstruction efforts began almost immediately following the war, and they are still underway.

Lower Park (map). Also known as the Lower Gardens. Visitors arriving by hydrofoil from Saint Petersburg will arrive at a pier at the end of the sea channel and approach the great palace from the lower park. In the lower park is the centerpiece of the whole ensemble.

Upper Park (map). Also known as the Upper Gardens. This area forms the land approach to the ensemble. Visiting the upper park is free.

Great Peterhof Palace (map). The three storey great palace sits on top of the ridge that separates the upper and lower parks. What is seen now is what was seen in Peter the Great’s time. In his time there was only a small royal mansion at the site. Only after his death (and over two centuries) was the site expanded, altered, and improved to become what is seen today.

Alexandria Park (map). Building began in 1826. The park is located east of the Lower Park and on the Gulf of Finland. The park includes a small palace and church built in a neo-Gothic style. A favorite spot for Tsar Nicolas II.

All public transport in Moscow (transport.mos.ru)

Or you can take subway down to ‘LENINSKY PROSPEKT’ (map) station, К224. They all have big sign ‘ФОНТАНЫ’ which means ‘fountains’. Minibus will bring you directly to the entrance of the Upper Park in 30 minutes. Don’t forget to tell the driver where you want to get off the bus.

A useful mobile app called Yandex Transport helps you locate a nearest bus, trolleybus or tram on the line.

rzd-online.ru – regular train tickets and timetables / + High speed trains. Moscow is a railway hub, with connections to all parts of Russia and far into Europe and Asia. Due to its hub status, Moscow’s train stations are often crowded; trains are the usual form of intercity transport for most Russians.  >> *Trans-Siberian Railway