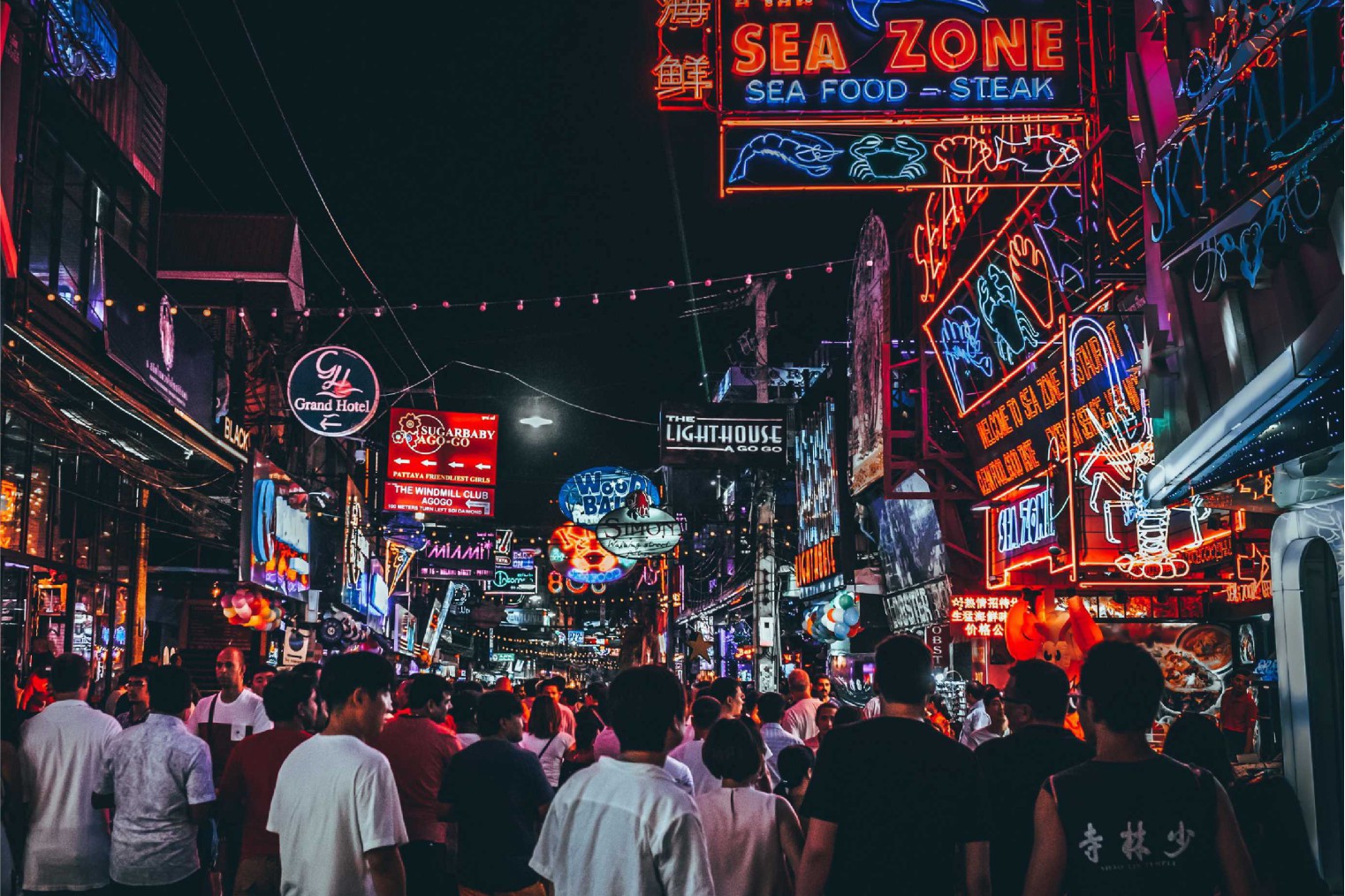 Pattaya (พัทยา, map) is a seaside resort on the Eastern Gulf Coast of Thailand, about 150 km southeast of Bangkok. Pattaya is mostly famous for its go-go and beer bars, but local authorities have made some efforts to provide more family-friendly attractions and activities.

Although the sex industry is still going strong and sex tourism remains the key money earner for Pattaya, the resort also attracts local families and holidaymakers from around the world.

Efforts by local authorities over the past few years have improved the quality of the beaches, but they are still lacklustre by Thailand’s standards, and overdevelopment has long since destroyed some of the natural charms the area once had.

On weekends and holidays, Pattaya Beach is crowded with domestic visitors, many of them day-trippers, from Bangkok and surroundings, since it’s a 2-hour drive from the nation’s capital.

The beaches of Jomtien (map) are much broader and generally in a better shape, and the atmosphere locally is more sedate and family-oriented than at Pattaya Beach.

Beach Rd south of south Pattaya Rd is closed to vehicles in the evenings (18:00-02:00) and is called Walking Street (map); it’s the main tourist area, both for nightlife and shopping. Other major tourism areas include the section of Second Rd between sois 1-4, and the sois immediately north of south Pattaya Rd.

Pattaya Beach (map) runs alongside the city. The beach is full of life with hotels, restaurants, shopping malls all along the road facing the beach. The street south of Beach Rd, Walking St, comes alive with rock music as the night sets in. People throng the street to experience the night life, which is unique in all respects. There are hundreds of beer bars, go-go bars, discothèques around the area. Muay Thai, or Thai Boxing, in open arenas in some of the beer bars adds to the carnival atmosphere.

*Jomtien Beach (map), more popular with families, is in the southern part of the urban area, and separated from Pattaya Bay by Buddha hill. Jomtien, a paradise for water sports enthusiasts, is calmer and more serene compared with Pattaya. Jomtien is also popular for its amusement park and tower, to keep children entertained.

Buddha Hill (เขาพระตำหนัก หรือ เขาพระบาท Khao Phra Tam Nak, map). Buddha Hill is one of the highest points in Pattaya. At the summit is the biggest Buddha statue in Pattaya, and nearby is a beautiful Chinese-style sacred area dedicated to Confucius and Lao-zi. The next hill, just across Phra Tam Nak Rd, has the best Pattaya Bay coastline viewpoint and is also worth a visit, especially for sunsets.

Chaloemphrakiat Park (สวนเฉลิมพระเกียรติ, map). The gardens of the park boast a wide variety of flowering plants and offer a scenic view of Pattaya. There are also multi-purpose grounds and winding trails for walking or jogging and standard exercise facilities.

Sanctuary of Truth (ปราสาทสัจธรรม, map). This huge ancient-style wooden temple is by the sea at Laem Ratchawet, north Pattaya. The entrance is at Soi 12, Na Kluea Rd. The Sanctuary of Truth was first begun in 1981 by Mr. With exquisite an unique architectural features, the building was conceived out of the vision that human civilisation has been achieved and nurtured by religious and philosophical truth.

BUS >   Pattaya is a mess for bus travellers unless they are going to Bangkok. The simple reason is that there is no single bus station as in most Thai towns. Going to Bangkok, you go to the “Air Conditioned Bus Terminal Pattaya-Bangkok” (that’s the real name, map) on North Road.

From Bangkok to the North Pattaya Rd bus station are air-con, almost always have an on-board toilet, are essentially direct (i.e., no stops), and provide a no fuss, no frills, hassle-free service. Departures from the Eastern (Ekamai, map) Terminal and Northern (Mo Chit 2, map) Terminal are frequent (every 20–40 minutes, depending on the time of day; more frequent still on public holiday weekends) and usually take 2-2½ hours.

RAIL >   Provided it’s a weekday, the most economical way to travel between Pattaya and Bangkok by public transport is by rail. From Monday to Friday, a single daily 3rd class (non-air-con) train departs Bangkok’s Hualamphong Train Station (map). Travelling by train although is the most economical, is far less comfortable than travelling by bus (train is non-air-con, not very clean and no toilet). Also travelling by train takes longer time, as much as 3.5 hours compared to bus 1½-2½ hours.