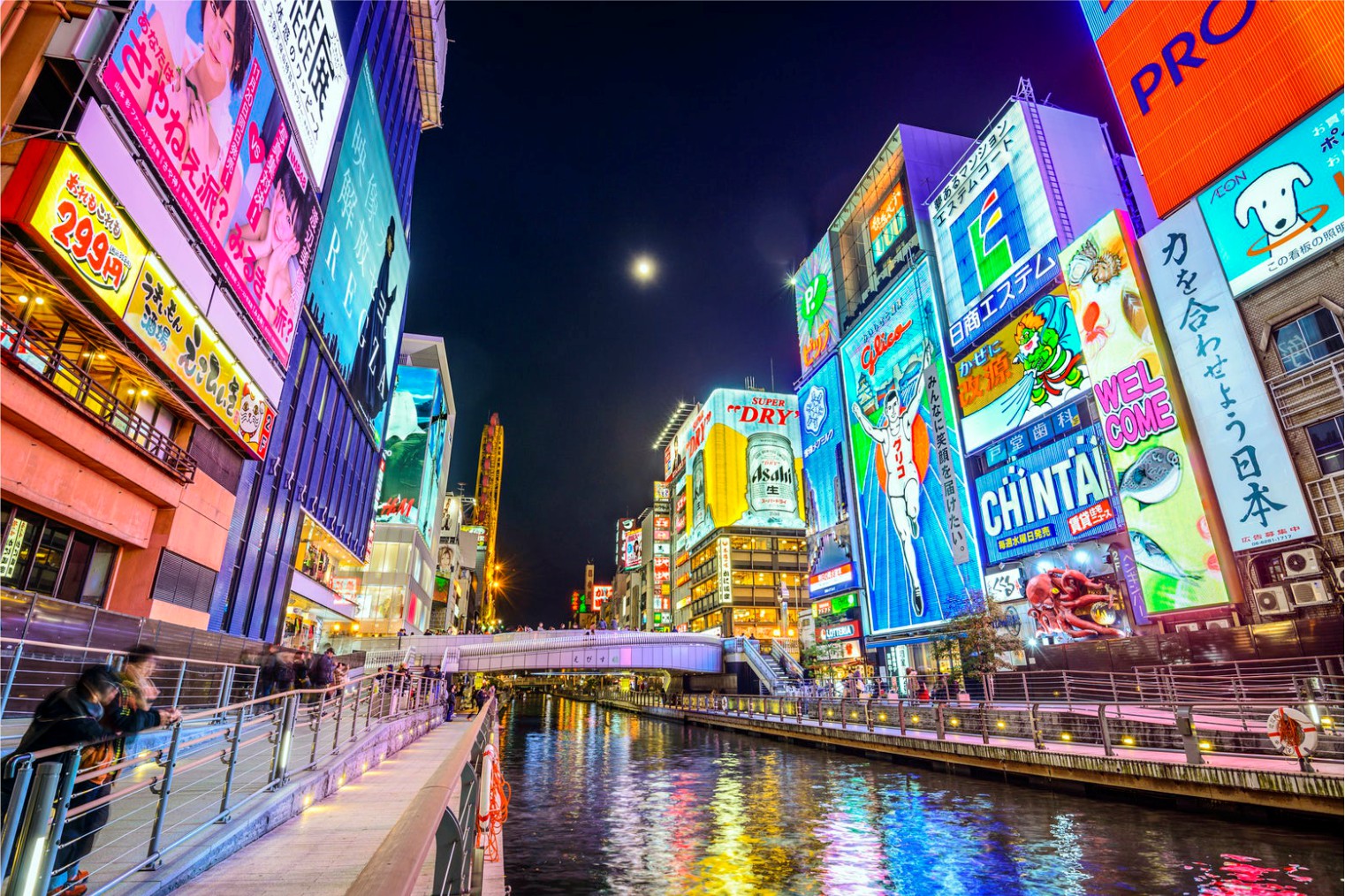 Ōsaka (map) is the third largest city in Japan. If Tokyo is Japan’s capital, one might call Osaka its anti-capital. Whatever you call it, though, there are many opportunities for you to discover its true anti-character.

Osaka is known for its food, in Japan and abroad. Author Michael Booth and food critic François Simon of Le Figaro have suggested that Osaka is the food capital of the world.

Its location makes Osaka a perfect base for doing one-day trips to nearby cities like Kyoto (30 minutes), Kobe (20 minutes), Nara (40 minutes) or Himeji (1 hour). (Typical times shown on JR Trains)

Minami (大阪 ミナミ) The traditional commercial and cultural center, composed of the Chuo (中央区, map) and Naniwa (浪速区, map) wards. Namba (なんば, 難波, map) is the main railway station, and the surrounding area has the department store and showy shopping. Shinsaibashi (心斎橋, map) and Horie (堀江) is the fashion area. Dōtonbori (道頓堀, map) is the best place to go for a bite to eat.

Spa World (map). Gender-separated European and Asian-themed spas and saunas as well as a pool for the family with slides and fun (don’t forget your swimming trunks). Open 24 hr so it is handy if you’re stuck for accommodation or locked out of your hotel after a night on the town, just pay up, change into their cotton overalls and pass out on one of their comfy leather recliners with as many blankets as you like.

Within Shinsaibashi, the Amerika-mura (アメリカ村, often shortened to “Amemura”, map) or “American Village” area is particularly popular among young people, and is often said to be the source of most youth fashion trends in Japan.

Just west of Amerika-mura, Horie (堀江) is a shopping area with fashionable Japanese boutiques, centered around Tachibana-dori (which is often translated as Orange Street).

Tenjinbashi-suji Shopping Street (天神橋筋商店街 Tenjinbashi-suji Shōtengai, map) is said to be the longest straight and covered shopping arcade in Japan at approx. 2.6 km length. Nothing meant for sightseeing, the arcade is a live exhibition of Osaka’s daily life, open since Edo period.

There are many nightlife districts in Osaka >> Dotonbori (道頓堀, map) + Kitashinchi (北新地, map). This area, south of JR Osaka station, is the most famous nightclub and entertainment district of contemporary Osaka. It’s just like Tokyo’s Ginza, filled with many hundreds of high-class bars, clubs and small restaurants.

Osaka Castle (wiki, map). The castle is one of Japan’s most famous landmarks and it played a major role in the unification of Japan during the sixteenth century of the Azuchi-Momoyama period.

Utsubo Park (wiki, map). Around the eastern part of this park, many cafes and bakery have opened after 1990. Sometimes open-air wedding are held at the rose garden. This area is becoming one of the fashionable places in Osaka city.

The National Museum of Art (wiki, map). Most of the artwork in the collection is from the post-war era. Pre-war exceptions include work by Paul Cézanne, Pablo Picasso, Max Ernst, Tsuguharu Foujita and Yasuo Kuniyoshi.

The Museum of Oriental Ceramics (wiki, map) is a Japanese art museum and regarded as one of the best ceramic-collections in the world. This museum collects, studies, conserves, exhibits and interprets East Asian ceramics, which mainly came from ancient China and Korea.

Osaka Municipal Museum of Art (wiki, map) is inside Tennōji park, housing over 8,000 pieces of Japanese and Chinese paintings and sculptures.

The Osaka Museum of History (wiki, map), opened in 2001, is located in a 13-story modern building providing a view of Osaka Castle. Its exhibits cover the history of Osaka from pre-history to the present day

Osaka Tenmangū Shrine (wiki, map) is a Shinto shrine and one of Tenmangū founded in AD 949 in Osaka. The Tenjin Festival is held here annually from 24 July to 25 July.

Tamatsukuri Inari Shrine (wiki, map) Its construction can be traced to 12 BCE.

Shitennō-ji (wiki, map) is a Buddhist temple. The temple is sometimes regarded as the first Buddhist and oldest officially-administered temple in Japan.

Isshin-ji (wiki, map) is a Pure Land Buddhist temple in Osaka, Japan. Starting in the Meiji period, thirteen images have been formed, each incorporating the ashes of tens of thousands of devotees. The annual burial ceremony on 21 April in turn draws tens of thousands of worshippers.

The widest selection of restaurants is in Osaka’s main entertainment districts, with the highest concentration of all in the Umeda (map) and Dotombori (map) areas.

Even in a nation of obsessive gourmands Osaka is known as an excellent place to eat, exemplified by the Osakan maxim kuidaore, “eat yourself into ruin”. The best place for trying out kuidaore is probably Dōtonbori (道頓堀) and neighboring Hōzenji-yokochō (法善寺横町, map) or Soemon-cho (宗右衛門町, map), the whole area containing nearly nothing but one restaurant after another.