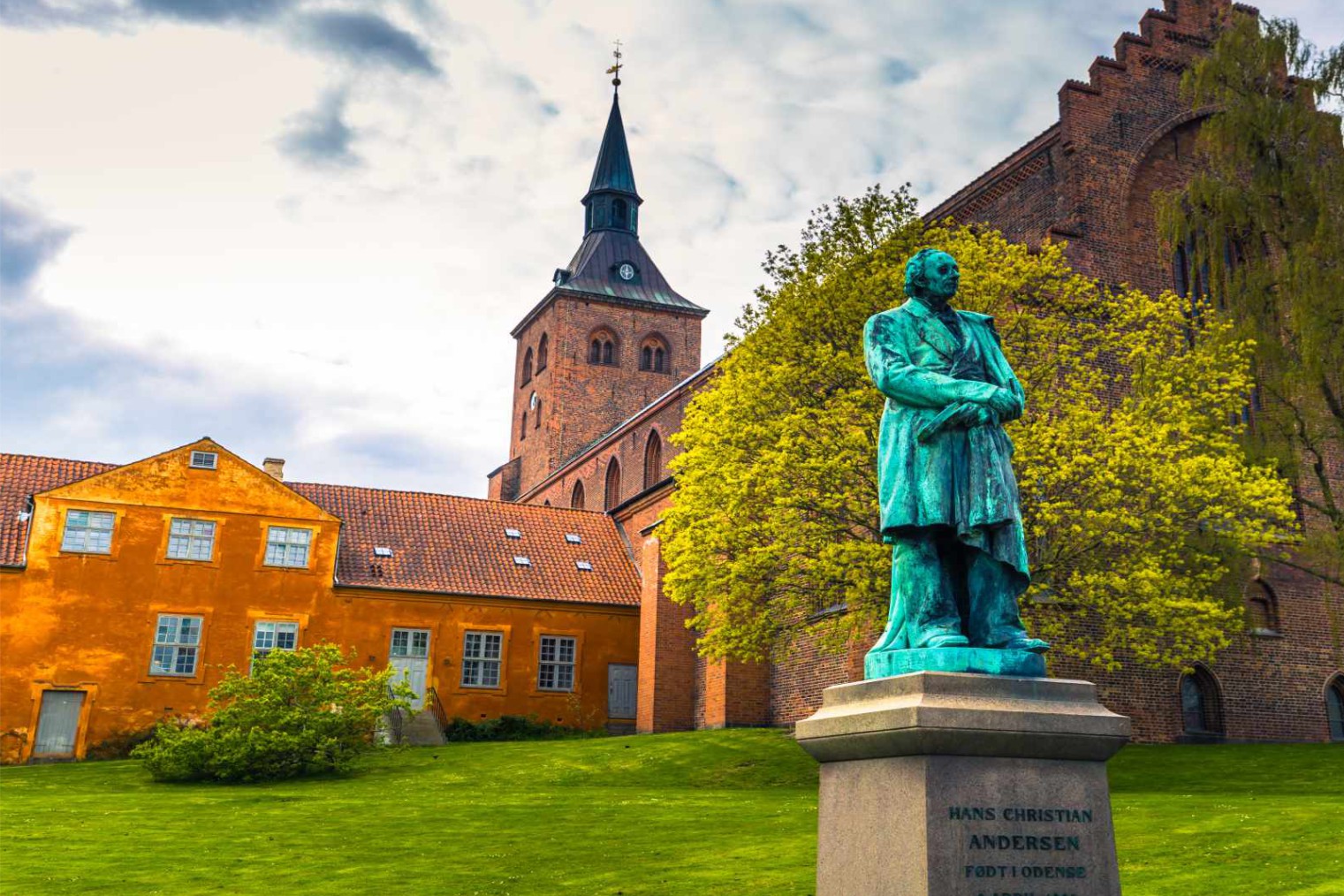 Odense (map) is the largest city on the island of Funen (“Fyn” in Danish, map) in Denmark. As Denmark’s third-largest city, it offers the traveller a mixture of an exciting vibrant night-life, beautiful street-scapes, great shopping opportunities & a rich cultural heritage.

Odense is also the birthplace of the fairytale writer Hans Christian Andersen, and the city proudly displays statues, parades and monuments in his memory. Andersen was born on 2 April 1805, in a tiny house on Munkemøllestræde, quite close to the cathedral (Hans Christian Andersen’s Childhood Home, map). During his lifetime, Andersen created many famous fairy-tales which today are internationally famous. For example The Little Mermaid, The Ugly Duckling and The Snow Queen.

Most of Odense’s attractions, bars, restaurants & shopping areas are very easily accessibly on foot. All of the city’s main hotels and hostels are in the city centre or train station areas. As a general rule all of the major attractions in the centre are between 5 and 10 minutes of each other.

A major exception to this is ‘The Funen Village‘ (Den Fynske Landsby, map), which is about a 45-minute walk along the river.

Hans Christian Andersen Museum (map). A museum which honours the life of the world’s perhaps most famous fairy tale writer, who was born and raised in Odense though he later left to live in Copenhagen to follow his dream of a career at the theater. Many of his stories are inspired by his childhood in Odense – for good and for bad.

Brandts Klædefabrik (map). The art and cultural centre of Odense. Contains two museums; The Danish Museum of Media which focuses on all types of media and their history and the museum of photographic arts museum specializing in photography, there is also a gallery with changing exhibitions in its four large halls.

Danish Railway Museum (map). A museum dedicated to the Danish railways. Contains dozens of old trains, carriages and rail road memorabilia over 10,000 m². There is also a large model train landscape and a ride-on miniature railway and playground for the children.

Egeskov Castle (map). One of Europe’s best preserved Renaissance water castles, dating to 1554, about 30 km south. The current owner, Count Ahlefeldt, has added numerous features, including a maze, walk-among-the-treetops and a vintage auto museum, toy museum, kitchen garden, and more, all in a scenic park.

Odense is known for its good bicycle infrastructure. There are bicycle lanes along most major roads in addition to many commuter bicycle paths separated from the road system. If you have not brought your own bike, the company Donkey Republic rent out bikes through an app.

The inner city bus route number 10 is free of charge; it only goes in a short loop around the city centre which makes it useful as a quick sightseeing tour.

BUS >   FynBus. The cream-coloured buses from FynBus travel to Odense from locations all over the island of Funen, Fredericia in Jutland, and Nykøbing on the island of Falster.

RAIL >   Danish State Rail system. It’s important that you have a valid ticket before you board the train, as it’s not possible to buy tickets onboard.

AIRPORTS >   Copenhagen Airport is the largest airport in Scandinavia.