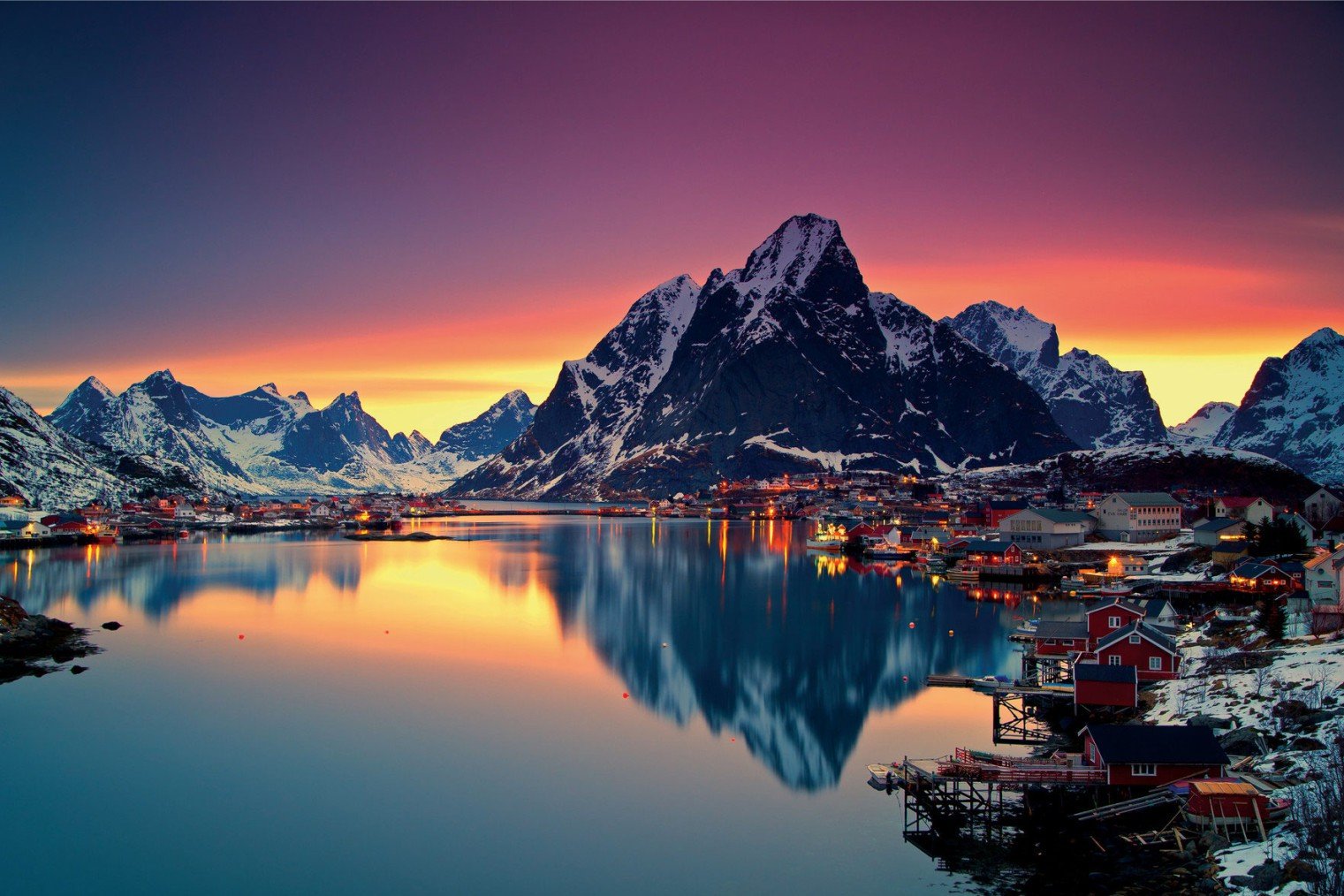 The main attractions of Norway are the varied landscapes that extend across the Arctic Circle. Popular tourist destinations in Norway include Oslo, Ålesund, Bergen, Stavanger, Trondheim and Tromsø. Much of the nature of Norway remains unspoiled, and thus attracts numerous hikers and skiers.

The west coast of southern Norway and the coast of northern Norway present some of the most visually impressive coastal sceneries in the world. National Geographic has listed the Norwegian fjords as the world’s top tourist attraction. Sognefjorden is the world’s second deepest fjord, and the world’s longest at 204 kilometres (127 mi).

Tourism is seasonal in Norway, with more than half of total tourists visiting between the months of May and August. The country is also home to the natural phenomena of the Midnight sun (during summer), as well as the Aurora borealis known also as the Northern lights.

As one of the richest countries in the world and with a strong currency, most visitors should expect higher prices than at home. On the other hand, many attractions in Norway are free of charge, most notably the landscape and nature itself. Furthermore, you don’t have to spend much money on accommodation if you’re prepared to sleep in a tent or under the open sky.

According to the Norwegian right to access, you may stay for up to two nights in one spot in uncultivated land if you keep away from houses and other buildings and out of the way of other people, provided that you leave no trace. If you move far away from people, you can stay for as long as you want.

If you want to see the northern lights, CNN has Tromsø on top of its list of best places to see it.

The most unusual dangers to visitors are found in nature. Every year, quite a few tourists get hurt, even killed, in the mountains or on the seas, usually after given, unheeded warnings.

Norway’s long coastline has ample opportunity for fishing. Salt water fishing for own consumption is free for all. For pollock/saith and mackerell there is no minimum size. Cod must be at least 40 cm, while sea trout must be at least 30 cm. (info: fiskeridir.no)

Rivers are mostly private and permit for fresh water fishing (mostly salmong and trout) must be obtained from the owner. Permissions are often sold in the local tourist information. Some of the largest lakes have the specific rules similar to salt water fishing.

East Norway – This region has about half of Norway’s population including the larger Oslo metropolitan area, locally known as Østlandet (or Austlandet).

Trøndelag – prominent position between North and South Trøndelag has been crucial in Norway’s history. There are major fjords but the landscape is more mellow than the wild West Norway. There are still great mountains and high plateaus popular among hikers and skiers. Trøndelag is home to great valleys and major rivers famous for salmon fisheries.

Northern Norway – is Europe’s northernmost region mostly north of the Arctic Circle. Summers have non-stop daylight (and sun at midnight) while during the darker season there is frequent display of northern lights (aurora borealis). Northern Norway covers 50 % of Norway’s area but is generally sparsely populated with only 1/10 of Norway’s population.

*Agder (map) – The coast of southern Norway (Skagerrak) is often called the Norwegian Riviera. The picturesque towns and the enchanting archipelago is surrounding the Skagerrak – coast, inland is perfect for hiking and the mountains there are good opportunities for skiing in winter. All surrounded by beautiful nature scenery.

Western Norway – famous for its fjords and mountainous sceneries. Bergen and Stavanger are dominant cities. There are fjords all along Norway’s endless coast, but in West Norway fjords are particularly long, steep and deep.

Svalbard – There is virtually no infrastructure outside a handful of small settlements. About 60 % of the area is covered by glaciers, 30 % is barren rock and only 10 % is covered by vegetation. Because of the delicate nature and polar bear hazard movement outside settlements is strictly regulated.