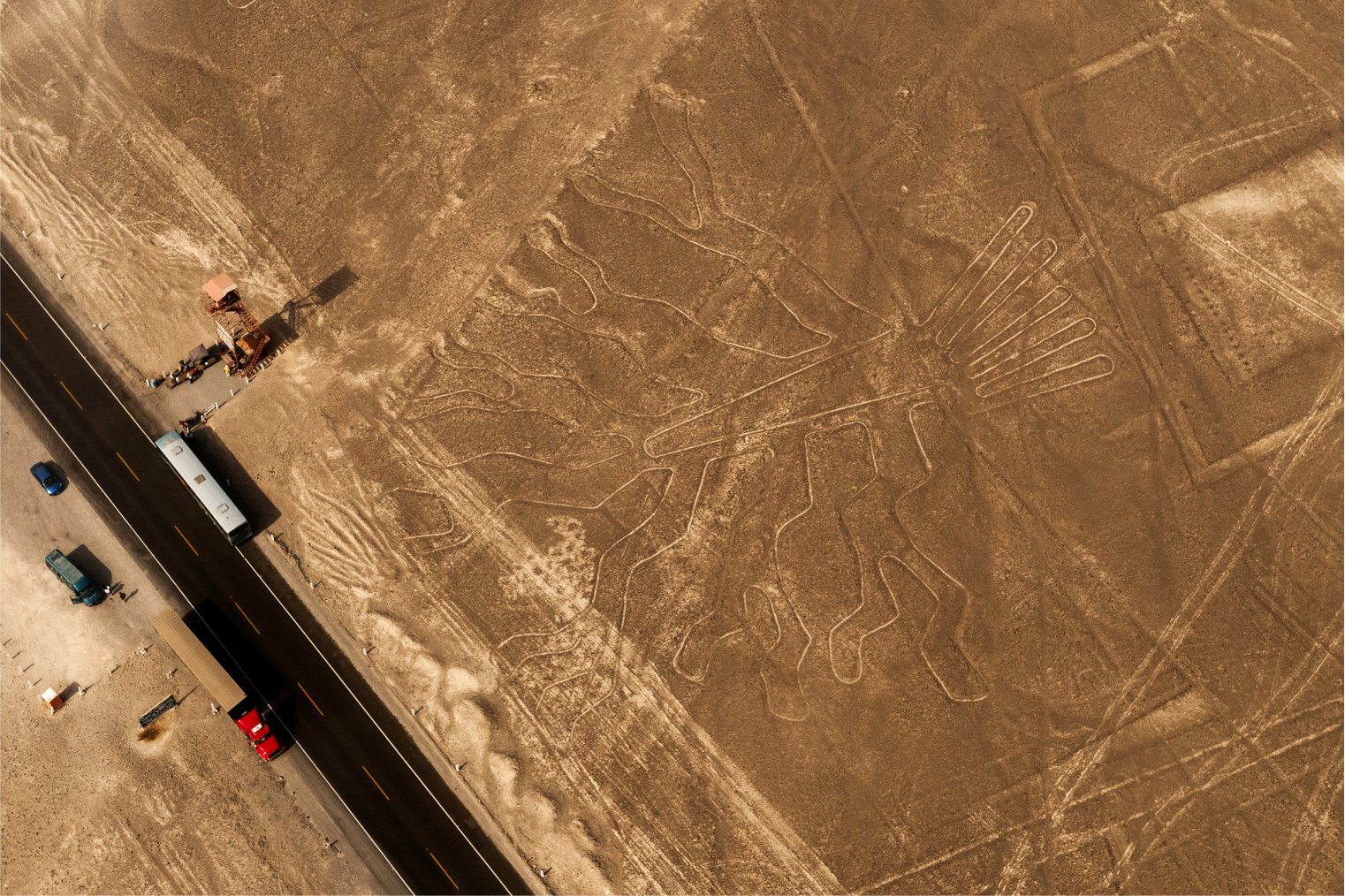 The Nazca Lines (map) are a group of very large geoglyphs made in the soil of the Nazca Desert in southern Peru. They were created between 500 BC and AD 500 by people making depressions or shallow incisions in the desert floor, removing pebbles and leaving differently colored dirt exposed.

In the years leading up to 2020, between 80 and 100 new figures had been found with the use of drones, and archaeologists believe that there are more to be found.

For much of their history, the Nazca people were based in the Ceremonial City of Cahuachi (map), an ancient pilgrimage center 28 km southwest of modern Nazca.

The Nazca Lines are the star attraction. Scattered over 500 km² of an arid plateau between the Nazca River and Ingenio River, they are huge representations of geometric patterns, animals, humans figures and thousands of perfectly straight lines that go on for kilometers. They were created by removing surface stones, revealing the lighter-colored soil below. They’re unquestionably ancient (dating back 1400-2200 years), and remarkably precise (with straight lines and clean curves).

The main concentration of designs is in a 10 by 4 km (6 by 2 mi) rectangle, south of the hamlet of San Miguel de la Pascana (map). In this area, the most notable geoglyphs are visible.

The Nazca Lines were first spotted when Faucette, an early Peruvian airline, began flying from Lima to Arequipa in the 1920s. The pilots noticed lines criss-crossing the desert between the valleys of Palpa and Nazca.

The pilots’ discoveries led Toribio Mejia Xesspe, an archaeologist, to come to Nazca in 1926. His research arrived at the conclusion that the lines were part of ancient sacred roads. Xesspe never flew over the area and so only saw straight lines; he missed the figures.

A more worthy discovery of the lines was made in 1939 by Paul Kosok of Long Island University. Kosok came to Nazca to study the ancient irrigation systems, the puquios (see below). He surveyed the channels and noted that over 50 of the underground aqueducts were still being used. He was told of other, even older, ancient channels and so set out to the Nazca desert but found only long, shallow furrows.

There are frequent collectivos (small buses) to and from Ica. They leave when full, it takes 2-3 hr. There are several direct overnight buses from Cusco (14 hours) and Arequipa (9 hr). There are also buses from Lima (Cruz del Sur and Oltursa buses go via Ica and Paracas) throughout the day and overnight, the journey takes about 6-8 hr.

Peru Hop buses offer comfortable and safe trips to Nazca, with free pickups and drop-offs. Nazca is a small city that does not have a proper bus station. Most of the bus companies are situated on the northwest part of the city.