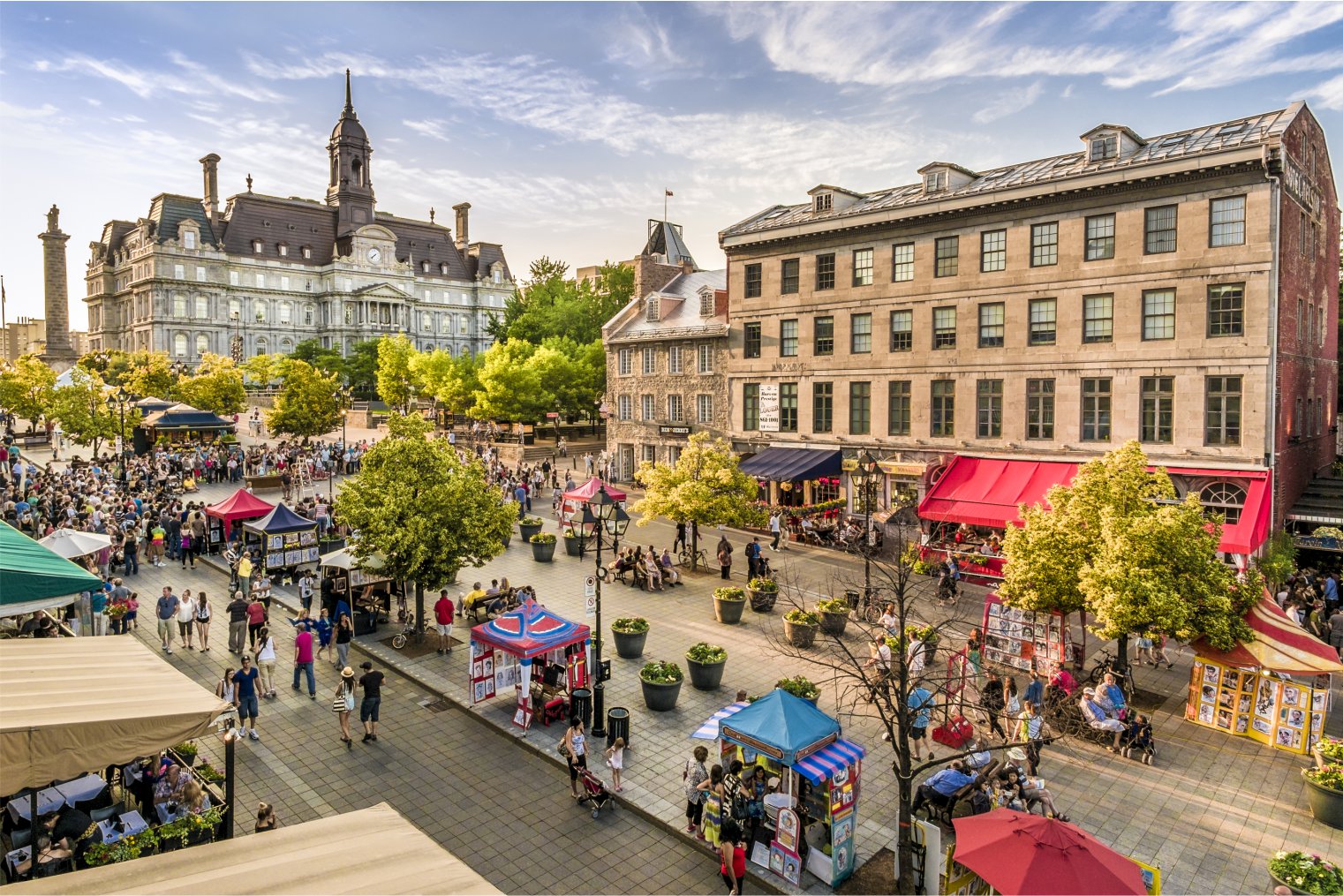 The city is situated 196 km (122 mi) east of the national capital Ottawa, and 258 km (160 mi) south-west of the provincial capital, Quebec City. While Quebec City is the capital, Montreal is the cultural and economic centre, and the main entry point to the province.

It is also home to ice hockey team Montreal Canadiens, the franchise with the most Stanley Cup wins.

Information • What to do • Сity Guide

Montreal was the capital of the Province of Canada from 1844 to 1849, but lost its status when a Tory mob burnt down the Parliament building to protest the passage of the Rebellion Losses Bill. Thereafter, the capital rotated between Quebec City and Toronto until in 1857, Queen Victoria herself established Ottawa as the capital due to strategic reasons.

There are many historic buildings in Old Montreal (map) in their original form: Notre Dame of Montreal Basilica (map), *Bonsecours Market (map), and the 19th‑century headquarters of all major Canadian banks on St. James Street (French: Rue Saint Jacques). Montreal’s earliest buildings are characterized by their uniquely French influence and grey stone construction. (*Culture of Montreal)

Architecture and cobbled streets in Old Montreal (wiki) have been maintained or restored. Old Montreal is accessible from the downtown core via the Underground City and is served by several STM bus routes and Metro stations, ferries to the South Shore and a network of bicycle paths.

The Underground City (RESO, map) is an important tourist attraction. It is the set of interconnected shopping complexes (both above and below ground). This impressive network connects pedestrian thoroughfares to universities, as well as hotels, restaurants, bistros, subway stations and more, in and around downtown with 32 km (20 mi) of tunnels over 12 km2 (4.6 sq mi) of the most densely populated part of Montreal.

Rue Prince-Arthur, east of Saint-Laurent, is for pedestrians only. Another pedestrian-only locale is Montreal’s Chinatown (map), on Rue de la Gauchtière Est between Saint-Urbain and Saint-Laurent. A good trick for navigating downtown Montreal is to remember that streets slope up toward Mount Royal, which is just north of downtown and easy to see from most locations.

To buy your own food or regional products, the public market at Jean-Talon (map), is the place to go. Open daily 08:00-18:00, the market is especially noteworthy for its selection of produce. The surrounding streets are heavily Italian-flavoured and have excellent grocery stores, butchers, bakeries, and restaurants.

!  Orientation. Montrealers use an unconventional compass, using the river and the mountain as cardinal points. When you are downtown, the St Lawrence River is “south” and Mount Royal is “north”; making the West Island and the East End correct in both their names and orientations. This tends to confuse visitors because the “East” End is really north and the “South” Shore is east, and the St Lawrence River runs almost north-south at this location.

To underscore this fact, a Montreal map will show that the “south end” of Victoria Bridge is in fact further north than the “north end”.

STM | Montréal – metro and buses around the city

CityMapper – Toronto | The ultimate transport app and technology for mobility in cities.

WATERWAYS >   Marine Atlantic provides ferry service between North Sydney, Nova Scotia, and Port-aux-Basques, Newfoundland. There are also ferries to the Îles-de-la-Madeleine from Souris, PEI, and Montreal. BC Ferries has an extensive network of services along the coast of British Columbia and to Vancouver Island and to outlying islands.

An interactive map of the cycle path network is available at the velo.qc.ca