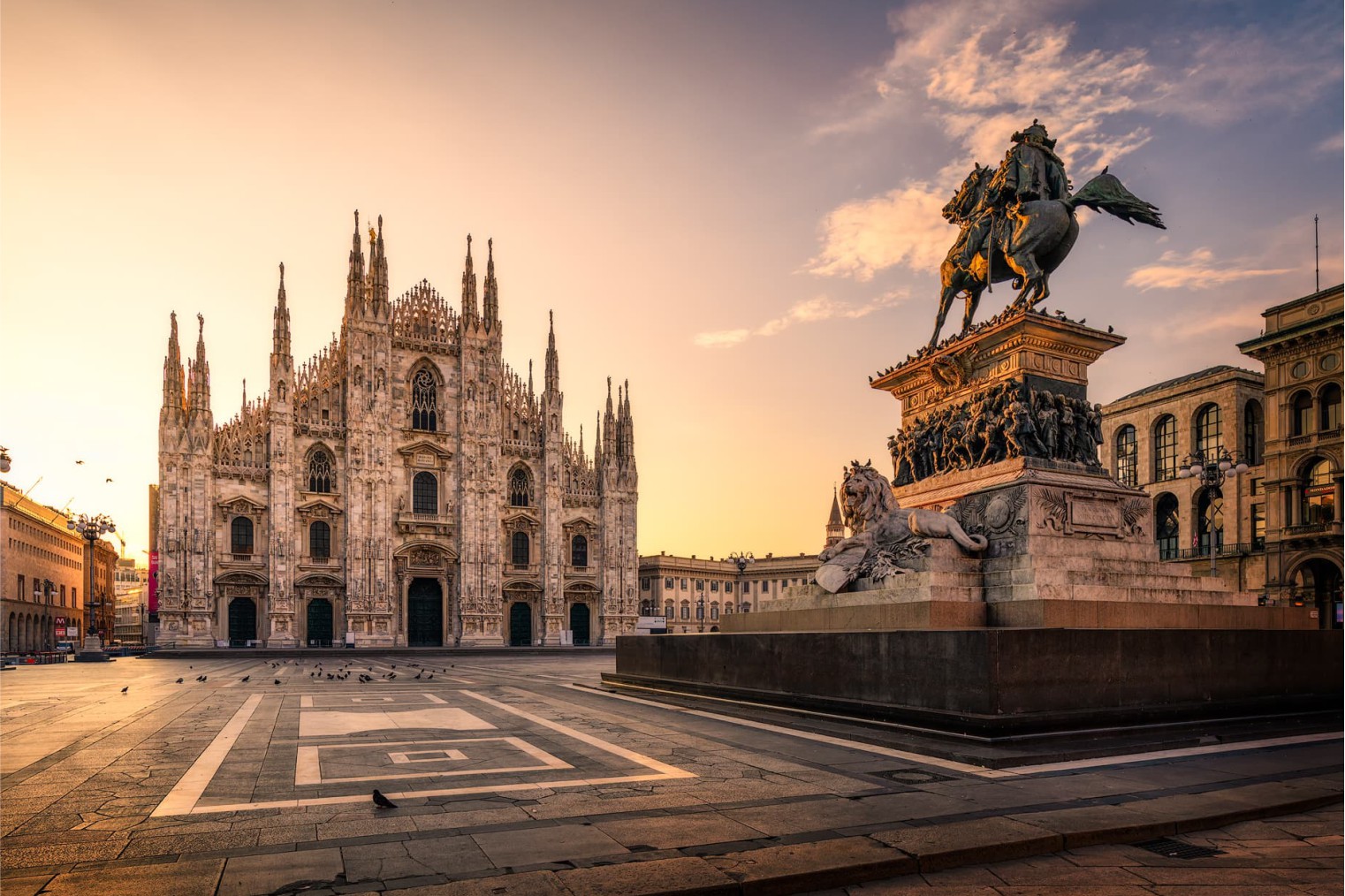 Milan (map), capital of Lombardy, and the second-most populous city proper in Italy after Rome.

The tourists are attracted by Milan’s museums and art galleries that include some of the most important collections in the world, including major works by Leonardo da Vinci.

In essence, for a tourist, what makes Milan interesting compared to other places is that the city is truly more about the lifestyle of enjoying worldly pleasures: a paradise for shopping, football, opera, and nightlife. Milan remains the marketplace for Italian fashion – fashion aficionados, supermodels and international paparazzi descend upon the city twice a year for its spring and autumn fairs.

The Centro Storico (map) is the historic center of the city of Milan, contained within the area once delimited by the medieval city walls and today by the streets forming the Corso Navigli easily distinguishable on the map of the city.

Leonardo worked in Milan from 1482 until 1499. He was commissioned to paint the *Virgin of the Rocks for the Confraternity of the Immaculate Conception and The Last Supper for the monastery of *Santa Maria delle Grazie (map).

Milan’s Cathedral (Duomo di Milano, map), built between 1386 and 1877, is the fifth-largest cathedral in the world and the most important example of Gothic architecture in Italy. The gilt bronze statue of the Virgin Mary, placed in 1774 on the highest pinnacle of the Duomo, soon became one of the most enduring symbols of Milan. + Museum of the Milan Cathedral (map)

Piazza Duomo (map). The grandest square in the city, the Piazza del Duomo is the cultural and social heart of Milan, and contains several of its most famous sights. There’s the majestic cathedral and classy Galleria, plus the 18th C Palazzo Reale and several big, venerable buildings.

Via Dante (map). One of the grandest and most frequented fashionable high streets in Milan. The Via Dante, named after the poet, is a beautiful and debonair pedestrian avenue which goes from the busy Piazzale Cordusio (map), all the way to the Largo Cairoli (map).

The Pinacoteca di Brera (map) is one of Milan’s most important art galleries. It contains one of the foremost collections of Italian painting, including masterpieces such as the Brera Madonna by Piero della Francesca.

The Castello complex also includes The Museum of Ancient Art, The Furniture Museum, The Museum of Musical Instruments and the Applied Arts Collection, The Egyptian and Prehistoric sections of the Archaeological Museum and the Achille Bertarelli Print Collection.

Piazza Della Scala (map). The location of the Statue of Leonardo da Vinci and La Scala theatre. It is a small, but grand square flanked by fine palaces, such as the city hall and the commercial bank. Great place for a photograph and right next to Galleria Vittorio Emanuele (map).

The largest parks in the central area of Milan are Sempione Park (map), at the north-western edge, and Montanelli Gardens (map), situated northeast of the city. English-style Sempione Park, built in 1890, contains a Napoleonic Arena, the Milan City Aquarium, a Japanese garden and a public library. The Montanelli gardens, created in the 18th century, hosts the Natural History Museum (map) of Milan and a planetarium.

CityMapper – Milan | The ultimate transport app and technology for mobility in cities.