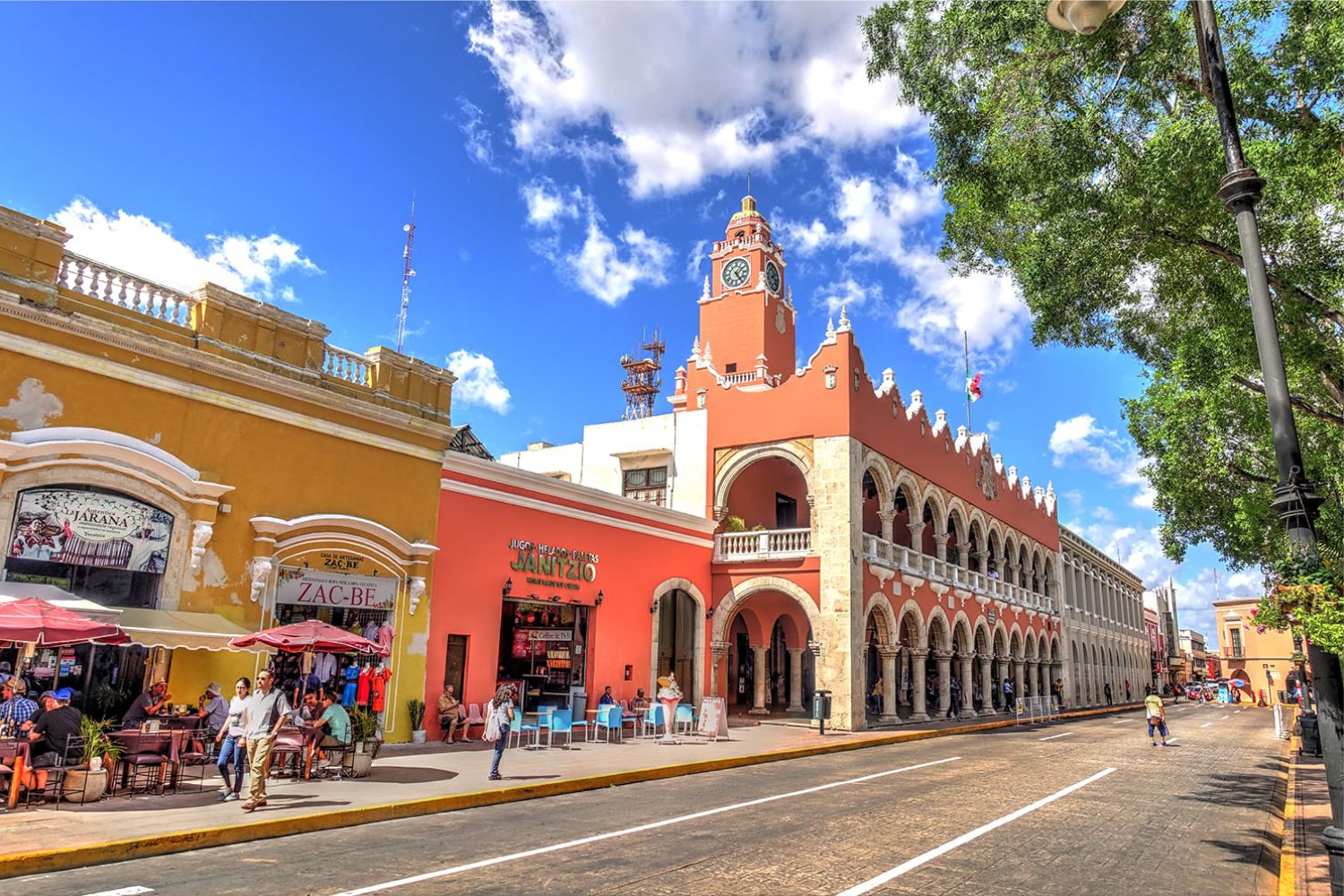 A short distance — yet seemingly a world away — from the rowdy, touristy beach resorts of Cancún and *Cozumel that make up the *Yucatán of cliché. Mérida (map) is the cultural center of southern Mexico, boasting a panoply of excellent museums and attractions, a vibrant street life, and a wealth of historic colonial-era architecture (centered on the Plaza de la Independencia, map) that’s second only to Mexico City on the national scene.

Mérida has one of the largest centro histórico districts in the Americas (surpassed only by Mexico City and Havana, Cuba). Colonial homes line the city streets to this day, in various states of disrepair and renovation.

One of the oldest developments in the city, home to the well-known Parque de las Américas (map). The place is a meeting point for neighbors and for afternoon walks.

From Mérida, it is easy to take day trips to a vast array of destinations: archaeological sites, ecological parks, typical villages, caves, beaches, colonial missions and more. Take your time and really explore the Maya sites, walk for miles along the Gulf of Mexico, attend a village festival, photograph the wildlife.

Catedral de San Idelfonso (map). This is the first cathedral built on the mainland of the Americas and the oldest in Mexico, built on the site of the Mayan temple Xbac-Luum-Chaan. The temple stones were incorporated into the new building, and a number of original Mayan carvings are still visible on the church walls.

Paseo de Montejo (map). A beautiful, tree-lined street, lined with houses developed by the henequen-industry barons. It’s a great place to walk in the evening. Have a dish of ice cream, look at the renovated mansions – an especially interesting villa is the Casa del Minarete (map).

Palacio Municipal (Ayuntamiento, Old City Hall, map). Mérida’s red city hall, easily spotted by its distinctive clock tower, was built in 1735. From this building in 1821 the Republic of Yucatán declared independence from Spain.

Palacio del Gobierno (Governor’s Palace, map). This lovely colonial palace was built in 1892 in the Neoclassical style, with a large couryard and impressive staircase. The main balcony upstairs has a good view of the Zócalo and the cathedral.

Sunday afternoons at the Plaza Grande (map) are a particular treat, and perhaps the most charming time in Mérida. The streets around the square are closed to vehicles, and the locals dress up to go for strolls to see and be seen.

Mérida Fest. Entire month of January. Sponsored by the city, this annual festival commemorates the founding of Spanish Mérida in January 1542. All arts are included, with many performers coming from across Mexico to participate. Most events are staged in open spaces and free to the public.

Carnaval de Mérida. Date varies, ending at the eve of Ash Wednesday; mid-February through early March. An annual event with a week of celebrations leading to up to Fat Tuesday. Mérida has one of the five most important carnavals in Mexico.

Several important archaeological sites are close to Mérida. Chichen Itza (map) is a large pre-Columbian archaeological site built by the Maya civilization, located in the northern center of the Yucatán Peninsula, present-day Mexico.

*Cuzamá (map) is one of the interesting sites on the *Ruta de los Cenotes itinerary, with prominent cenotes (sinkholes leading to significant caves). Buses to Cuzamá depart from Terminal Noreste (map).

Mayapán (about 40km SE of Mérida and 100km W of Chichen Itza, map). A compact, well-preserved pre-Columbian site, Mayapán was the political capital of the Maya in the Yucatán Peninsula from about the late 1220s until 1440s. Unlike at other Mayan sites, climbing of pyramids is permitted, and worth the effort.

A range of street food is available, especially at Mercado Lucas De Galvéz (map), the central food market. This is also a good place to shop for local specialties, including queso mennonito, an unpasteurized cheese made in the nearby Mennonite community.