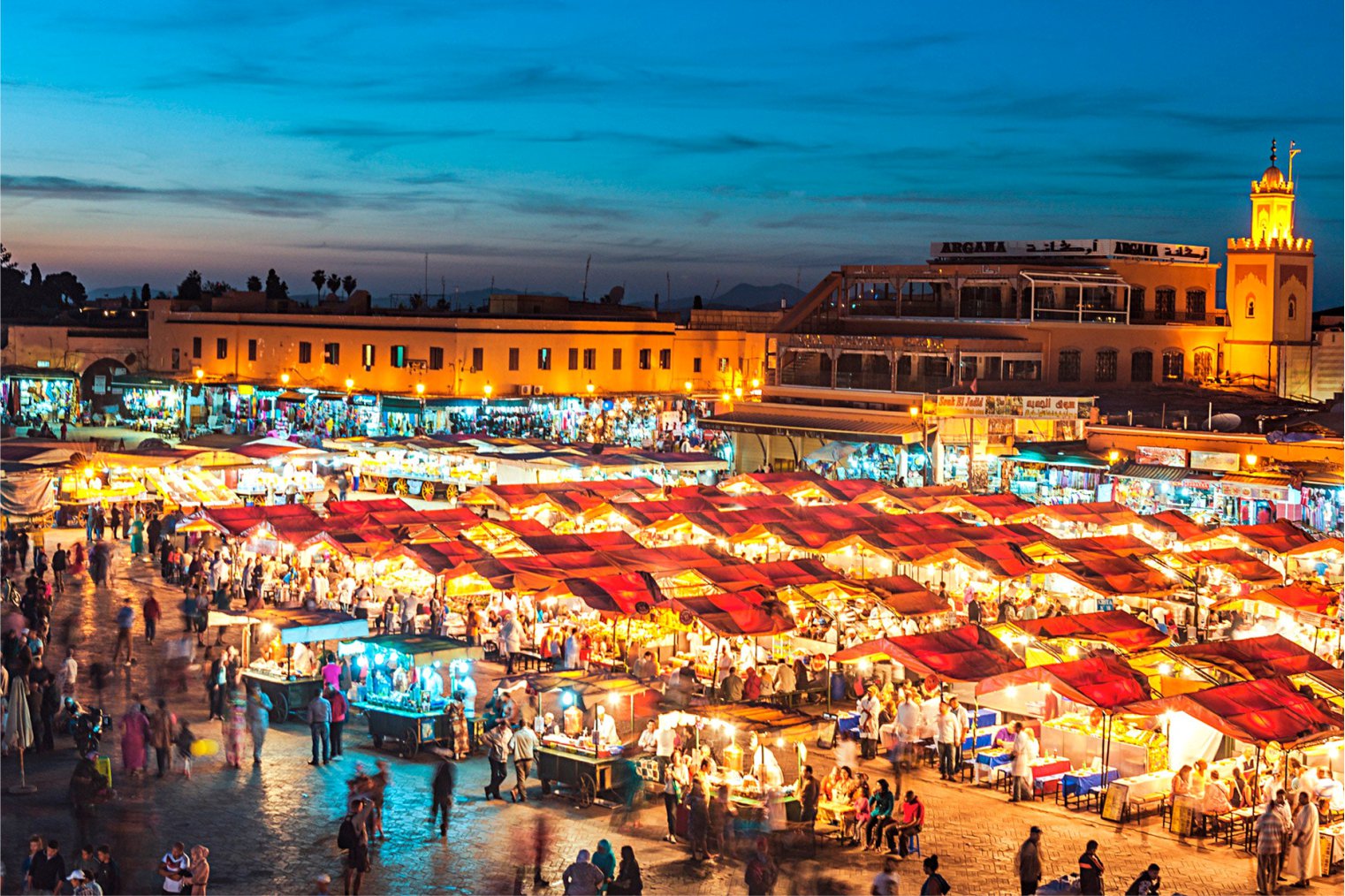 Marrakech (map), also spelt Marrakesh, is one of the imperial cities of Morocco. It is the third largest city in Morocco after *Casablanca and *Rabat, and lies near the foothills of the snow-capped Atlas Mountains and a few hours away from the foot of the Sahara Desert.

The city is divided into two parts: the Medina (map), the historical city, and the new European modern district called Gueliz (map) or Ville Nouvelle. The Medina is full of intertwining narrow passageways and local shops full of character; it also contains the large square Djemaa El-Fna (map), where many hotels are located and tourists, locals and vendors congregate.

There is much to see and do in Marrakech. An entire day can be dedicated to wandering around all the different souks, seeking out the best bargains.

Marrakech is the main tourist destination in Morocco and thus it is also a place where many Moroccans try to become rich fast by ripping off tourists. This mentality is so widespread that even Moroccans are now ripped off whenever possible so that they call the city “Marrakech, Arnakech” – which rhymes in Arabic and translates to “Marrakech, Mafia”.

Djemaa El-Fna (map). The highlight of any Marrakech night. Musicians, dancers, and story tellers pack this square at the heart of the medina, filling it with a cacophony of drum beats and excited shouts. By day it is largely filled with snake charmers and people with monkeys, as well as some of the more common stalls.

Koutoubia Mosque (right besides Djemaa El-Fna, map). It is said that the minaret of the Koutoubia mosque is to Marrakech as the Eiffel Tower is to Paris. At night, the mosque is beautifully lit. It was completed under the reign of the Berber Almohad Caliph Yaqub al-Mansur (1184 to 1199). Non-Muslims are not allowed inside.

Tanneries (map). Visiting the tanneries can be an interesting experience. Even if some people tell you the area is only for locals, it is possible to visit the Tanneries without paying a youngster. After finding a tannery, ask one of the workers if you can visit it and take pictures.

Dar Si Saïd Museum (on Rue Riad Zitoun Jdid, map). Museum set in an old palace with beautiful gardens. While somewhat run-down, it is worth seeing and houses many different artifacts from Morocco through the ages, such as wood carvings, musical instruments, and weapons.

El Bahia Palace (map). An ornate and beautiful palace, built at the end of the 19th century for grand viziers of the sultan. Popular with guided tours and stray cats. The palace is well worth a visit and gives a great impression of what it must have been like to be a 19th-century nobleman in Morocco.

Marrakesh is not in the desert: you will spend several hours to get to the desert and that day tours are therefore pretty stressful.

*Amizmiz (map). With one of the largest Berber souks in the High Atlas Mountains every Tuesday, Amizmiz is well-worth a trip. This is especially true for those travellers wishing to experience the less urban, less touristy mountain towns of the High Atlas.

BUS >   Alsa. The bus companies mostly used by tourists are CTM, Pullman du sud and Supratours. Other companies do exist, though these three companies are usually the safest options, but mostly not the cheapest ones.

AIRPORTS >   Marrakesh Menara Airport. The airport is about 9 km south-west of the city center (Medina), and 6.6 km from the Djemaa El-Fna square. The L19 Airport express bus. It serves all the major hotels and is a great way to go from the airport to the Median area.