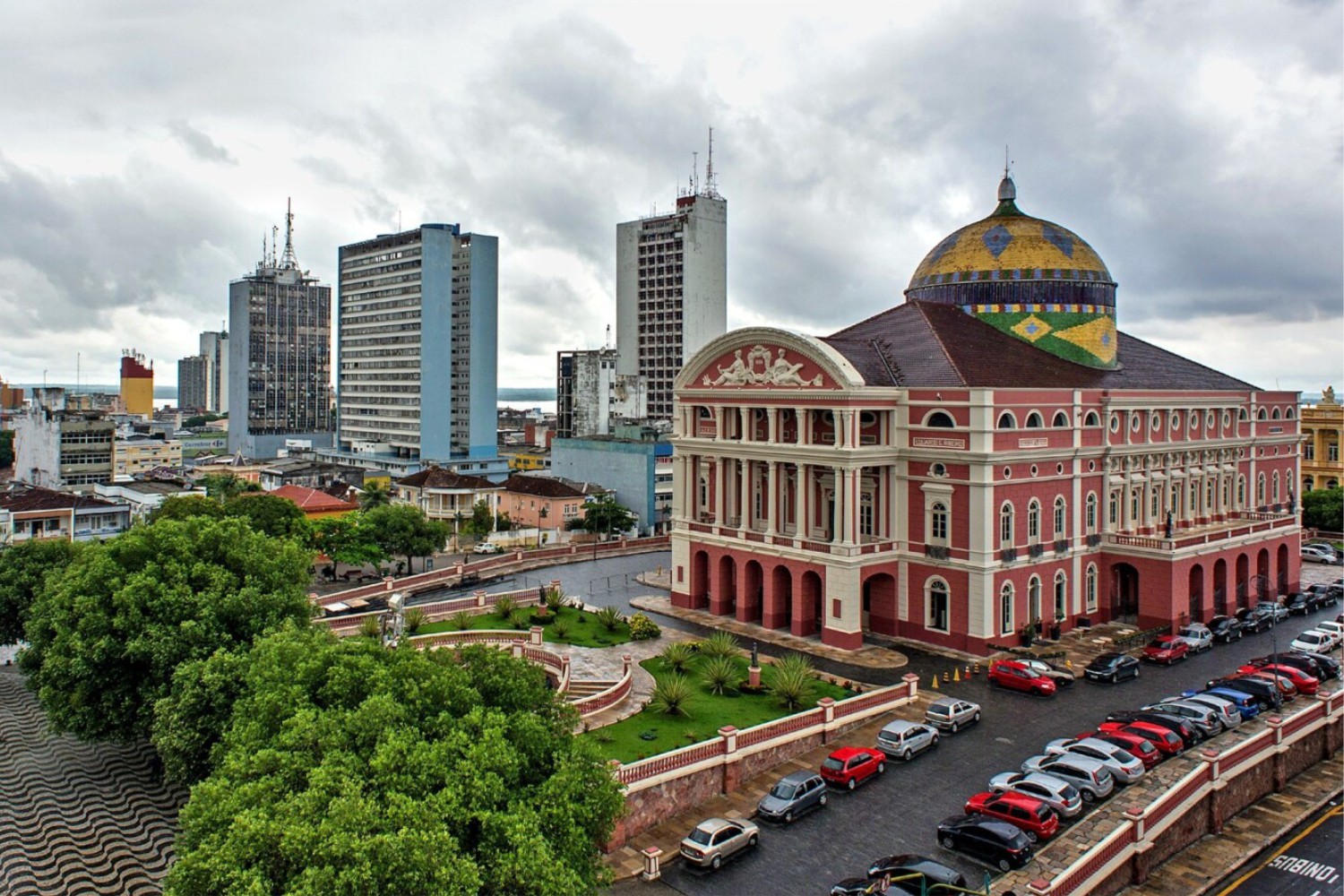 Manaus (map) is the capital and largest city of the Brazilian state of *Amazonas. Its name means Mother of Gods in the indigenous language. Manaus is located in the center of the world’s largest rainforest, and home to the National Institute of Amazonian Research, being the most important center for scientific studies in the Amazon region.

Manaus is a charming and cultural city. The green Amazon Forest, the dark waters of Rio Negro, the muddy waters of Solimões River, exotic local cuisine, diverse architecture, and very welcoming people are some of the city’s treasures.

Because of Manaus’ location within the Amazon rainforest, it attracts a substantial number of Brazilian and foreign tourists, who come to see wildlife on land and in the rivers.

Of all cities one can reach when voyaging along the Amazon River, Manaus is by far the most expensive.

The Mercado Adolpho Lisboa (map), founded in 1882, is the city’s oldest marketplace, trading in fruit, vegetables, and especially fish. It is a copy of the *Les Halles market of Paris. Other interesting historical sites include the customs building, of mixed styles and medieval inspiration; the Rio Negro Palace cultural center (map); and the Justice Palace (map), right next to the Amazonas Opera House (map).

If you plan to move around the city independently, it’s important to find accommodation either downtown or close to the main axis of Av. Constantino Neves and Av. Djalma Batista.

About 18 km (11 mi) from downtown is Ponta Negra beach (map), a neighbourhood that has a beachfront and popular nightlife area.

You need to travel at least 100 km from Manaus to see virgin rain forest and the wild life you are looking for. A better option may be a trip to lake Juma which is a special protected area.

Manaus does not have winter, summer, spring or autumn; there are only two seasons in the city: a rainy season (from December to May), with long periods of continuous rain and frequent thunderstorms that fill the rivers, forming igapós (forests flooded by rivers, similar to swamps), and a season drought (from June to November), when it still rains, but to a lesser extent.

Thus, if traveling in wet season, be prepared to get wet and not dry out until the end of your trip.

The area between Av. Floriano Peixoto (map) and the port has many small restaurants that offer food for decent prices. Directly at the port at the big market (2 blocks downstream from Mercado Municipal) food stalls offer even cheaper alternatives.

Between  February and  March, Manaus Carnival brings together the beauty and wealth from the Samba Schools Parade and also more than one hundred Carnival blocks around the whole city, including the Historic Center, where traditional blocks like Banda da Bica, Banda da Difusora, Banda do Jangadeiro and others happen every year.

BUS >   Green Toad Bus – knows that booking local transport and activities around South America can be challenging and confusing at times. We make it easy, safe, cheap & fun with our carefully designed Bus Travel Passes! Busca Ônibus is a useful resource for finding bus schedules.

AIRPORTS >   *Eduardo Gomes International Airport is the airport serving Manaus. The airport has two passenger terminals, one for scheduled flights and the other for regional aviation.

Manaus is over 2.700 km from São Paulo or Rio de Janeiro which takes about four hours by air. Coming from North America or Europe, if you can’t get a direct flight, the best option price- and route-wise is probably to connect in *Fortaleza (Pinto Martins International Airport), the international hub of Northern Brazil (and it might be considerably cheaper to buy an international ticket to Fortaleza and independent domestic one from Fortaleza to Manaus)

WATERWAYS >   From Belém on the Atlantic Coast, it takes about five days. >> navegam.com.br

In northern Brazil, it is possible to travel many distances by boat. In fact, the boat is the main and most accessible means of transport to get around the Amazon, since the Amazon Forest is cut by many rivers and some cities are inaccessible by road. The best boat services in the country are in the Amazon, where you can ride on speedboats and comfortable yachts or small wooden boats.