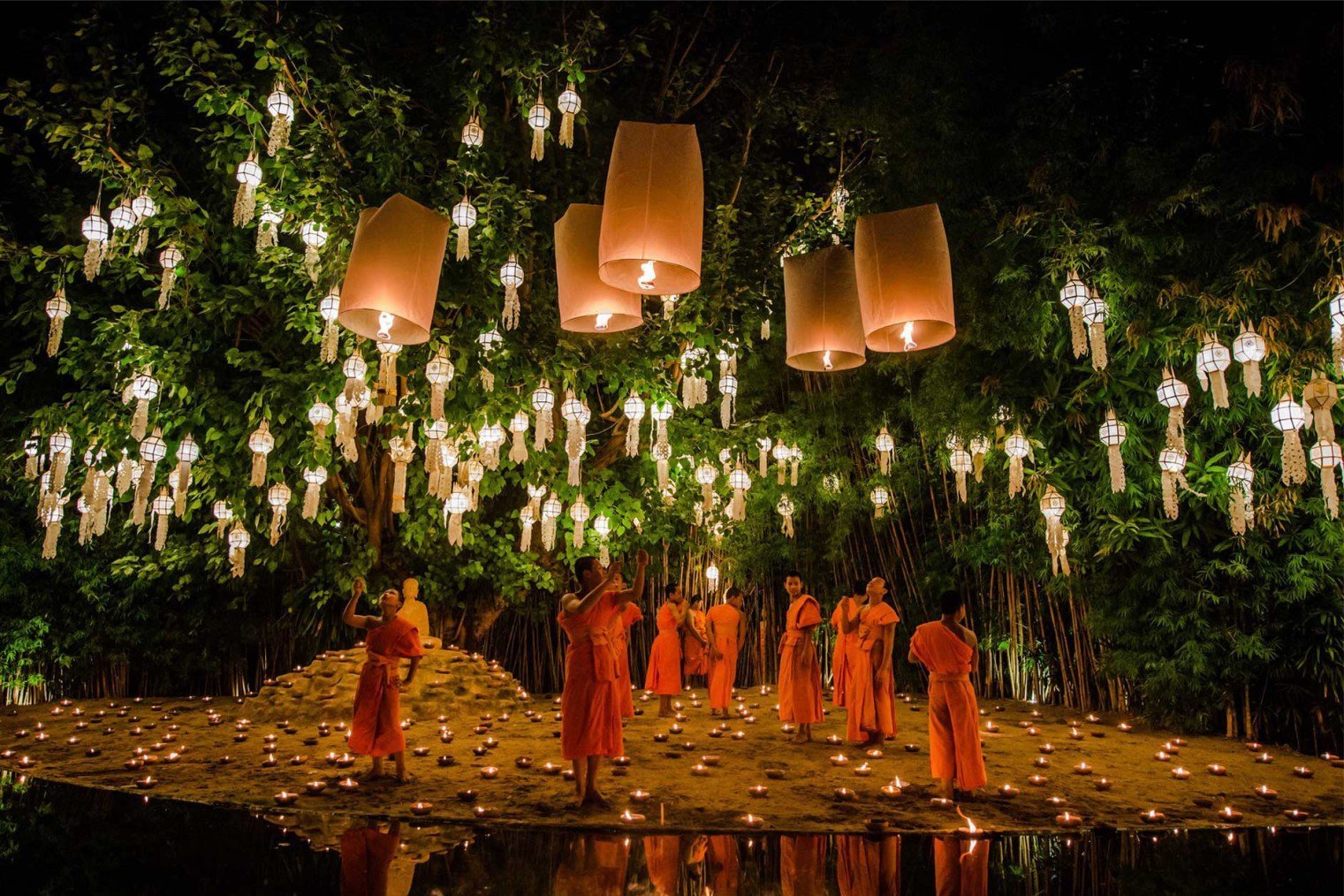 Loy Krathong is a Siamese festival celebrated annually throughout the Kingdom of Thailand and in nearby countries with significant southwestern Tai cultures.

The name could be translated as “to float ritual vessel or lamp,” and comes from the tradition of making krathong or buoyant, decorated baskets, which are then floated on a river.

Loy Krathong takes place on the evening of the full moon of the 12th month in the traditional Thai lunar calendar, thus the exact date of the festival changes every year. In the Western calendar this usually falls in the month of November. In Chiang Mai (map), the festival lasts three days.

Recently, it has been accepted that Loy Krathong in Thailand is the festival mixed and combined three important cultural festivals from Bondet Bratib of Khmer Empire, Water Lantern of China and the festival of Kartik Purnima celebrated in the eastern state of Odisha in India.

Loy Krathong coincides with the Lanna (northern Thai) festival known as Yi Peng (ยี่เป็ง). Yi means ‘two’ and peng means a ‘full moon day’. Yi Peng refers to the full moon day in the second month according to the Lanna lunar calendar (the twelfth month of the Thai lunar calendar). Swarms of sky lanterns, literally: ‘floating lanterns’, are launched into the air.

The most elaborate Yi Peng celebrations can be seen in Chiang Mai, the ancient capital of the former Lanna kingdom, where now both Loy Krathong and Yi Peng are celebrated at the same time resulting in lights floating on the waters, lights hanging from trees/buildings or standing on walls, and lights floating in the sky.

Chiang Mai’s historical centre is the walled city (“city” is chiang in the northern Thai dialect while mai is “new”, hence Chiang Mai translates as “new city”). Sections of the wall dating to their restoration a few decades ago remain at the gates and corners, but of the rest only the moat remains.

Inside Chiang Mai’s remaining city walls are more than 30 temples dating back to the founding of the principality, in a combination of Burmese, Sri Lankan, and Lanna Thai styles, decorated with beautiful wood carvings, Naga staircases, leonine and angelic guardians, gilded umbrellas and pagodas laced with gold filigree. The most famous is Wat Phrathat Doi Suthep, which overlooks the city from a mountainside 13 km away.