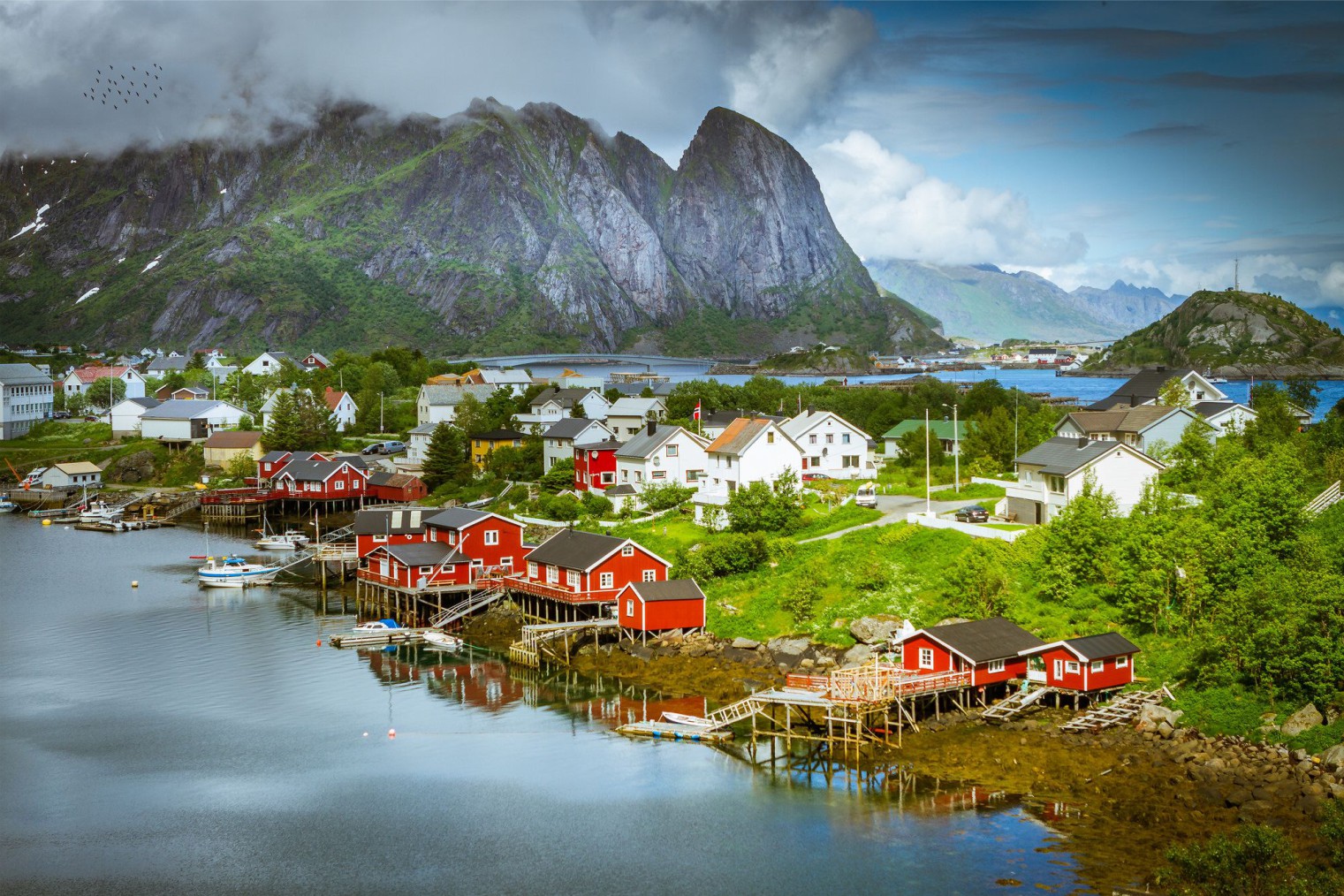 Lofoten (map) is a group of islands in the northern part of Norway. With its postcard-looking small fishing villages nestled in fjords dotting a very rugged coast with abrupt peaks rising directly from the ocean, the archipelago is often described as one of the most scenic parts of Norway.

The main attraction of the archipelago is its majestic scenery. The coastline is dominated by high mountains cut by fjords, as well as sandy white beaches.

The light varies very much over the seasons. From 24 hours of daylight from May to early August to just a bluish twilight lasting three hours around noon in December and January. In March and September, there are normal daylight hours: 12 hr day and 12 hr night.

The islands have for more than 1,000 years been the centre of great cod fisheries, especially in winter, when the cod migrate south from the Barents Sea and gather in Lofoten to spawn. Bergen in southwestern Norway was for a long time the hub for further export of cod south to different parts of Europe, particularly so when trade was controlled by the *Hanseatic League.

Reine (map) this fishing village is known for its incredible scenery, about 300 kilometres (190 mi) southwest of the town of Tromsø.

Moskenes (map) a small fishing village on the island, with no tourist information or a supermarket; however, there is a camping location and a car rental option near the ferry terminal. Henningsvaer (map) a very pleasant village reached by a short bus ride or long painful walk from Svolvær.

Kabelvaag (map). Lofoten’s oldest fishing village. Great food and small shops. It lies a little to the south-west of *Svolvær. The village was founded as Vågan in the early 12th century by King Øystein Magnusson, who built a church and a fishermen’s hostel there. The Lofoten Museum (map), as well as the Lofoten Aquarium (map) and the Espolin Gallery (map), are all in Kabelvåg.

There is a well-marked cycling route that goes from Å (map) in the south and continues past Fiskebøl (map) in the north. The route is part public road, part cycle-path with the option to bypass all of the tunnels by either cycle-path (tunnels through mountains) or boat. There is a dedicated cycling ferry which sails between Ballstad (map) and Nusfjord (map), allowing cyclists to avoid the long, steep Nappstraum tunnel.

Lofoten being a traditional cod fishing area, local delicacies are as one would expect taken from the sea. If you appreciate dried stockfish or cod, you will probably love the food. Due to the limited choice and the high prices, particularly on Værøy, you should bring your own food.

+ Ferry and express boat timetables to Lofoten (lofoten.info) • Getting around (visitnorway.com)