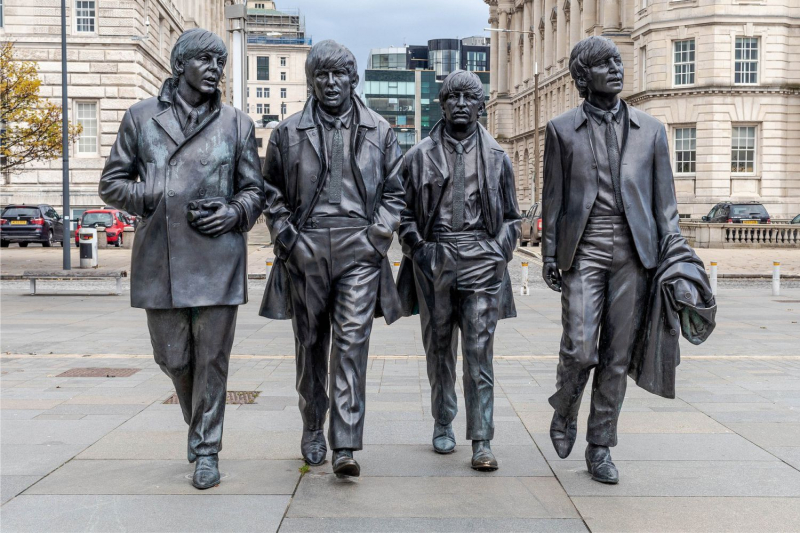 Liverpool (map) is a city in the North West of England, within the historic county boundaries of Lancashire. Liverpool is particularly famous for its architecture, to the point where English Heritage consider it England’s finest Victorian city.

Liverpool is a city with great cultural heritage and was awarded the title of European Capital of Culture 2008, with the famous Pier Head Waterfront (map) being a UNESCO World Heritage.

The city possesses the largest national museum collection outside of London and has a fascinating and turbulent history as a great world maritime centre. Liverpool is home to Europe’s oldest Chinatown (map).

The majority of buildings in the city date from the late-18th century onwards, the period during which the city grew into one of the foremost powers in the British Empire. There are over 2,500 listed buildings in Liverpool, of which 27 are Grade I listed and 85 are Grade II* listed.

Pier Head (map) – The harbour of Liverpool has played a very important role in modern history of the city. The wharf area was recognised as a World Heritage Site by UNESCO between 2004 and 2021, when it was controversially delisted due to modern development.

The city is closely associated with the arts, especially music; the popularity of the Beatles, widely regarded as the most influential band of all time, led to it becoming a tourist destination. >> The Beatles Story (map)

The city also has a greater number of public sculptures than any other location in the United Kingdom aside from Westminster and more Georgian houses than the city of Bath.

Museum of Liverpool (map). A large museum all about the city of Liverpool and its history from ancient inhabitants of the area to its modern revival.

Albert Dock (map). This is one of the more sophisticated places in Liverpool and is situated in the largest collection of Grade I listed buildings in the UK. Old warehouses have been converted into shops, apartments, restaurants, pubs, hotels, galleries and museums.

St George’s Hall (map). A mammoth of a Greco-Roman-style building which was built by wealthy merchants for the people of the city. It is arguably the finest neo-classical building in Western Europe, and has been thoroughly restored for Capital of Culture Year.

World Museum Liverpool (map). This is a fine building and well worth a visit. It contains an excellent collection of British rocketry exhibits, as well as the best Egyptological collection outside London.

The Bluecoat (map) is the oldest Grade 1 listed building in Liverpool’s city centre, dating back to 1717. Following a £14.5 million redevelopment, it re-opened in March 2008 with a new wing of galleries and a state-of-the-art performance space. It showcases talent across artistic disciplines including visual art, music, literature, dance and live art.

Metropolitan Cathedral of Christ the King (Paddy’s Wigwam, map). Affectionately known by the locals as Paddy’s Wigwam or “the Pope’s launching pad”. Visit on a sunny day as the stained glass ceiling looks fantastic!

Croxteth Hall and Country Park (map). This is one of Liverpool’s most important heritage sites, one of “the finest working country estates in the North West”. The estate has four main attractions – The Historic Hall, Croxteth Home Farm, the Victorian Walled Garden and a 500-acre country park including the new Croxteth Local Nature Reserve.

Lark Lane (map) is about 2.5 miles to the south of the city centre, a very pleasant (and less stressful than the city) place and is one of the better places to eat out. The road, which connects Aigburth Road with Sefton Park, is home to many unique restaurants, cafés and other shops.

RAIL >   Liverpool is served by Liverpool Lime Street station (map) which is in the heart of the city centre. Trains arrive frequently from many parts of England. About two hours from London by train.

AIRPORTS >   Liverpool John Lennon Airport, about 12 km (7.5 mi) to the south of the city centre. 500 Airport Express runs every 30 minutes and takes about 45 minutes to reach the city centre.

WATERWAYS >   Mersey Ferry – Probably the nicest way to get to the Wirral and back.

There are many ferry routes into the UK from continental Europe. (*Ferry routes to Great Britain)