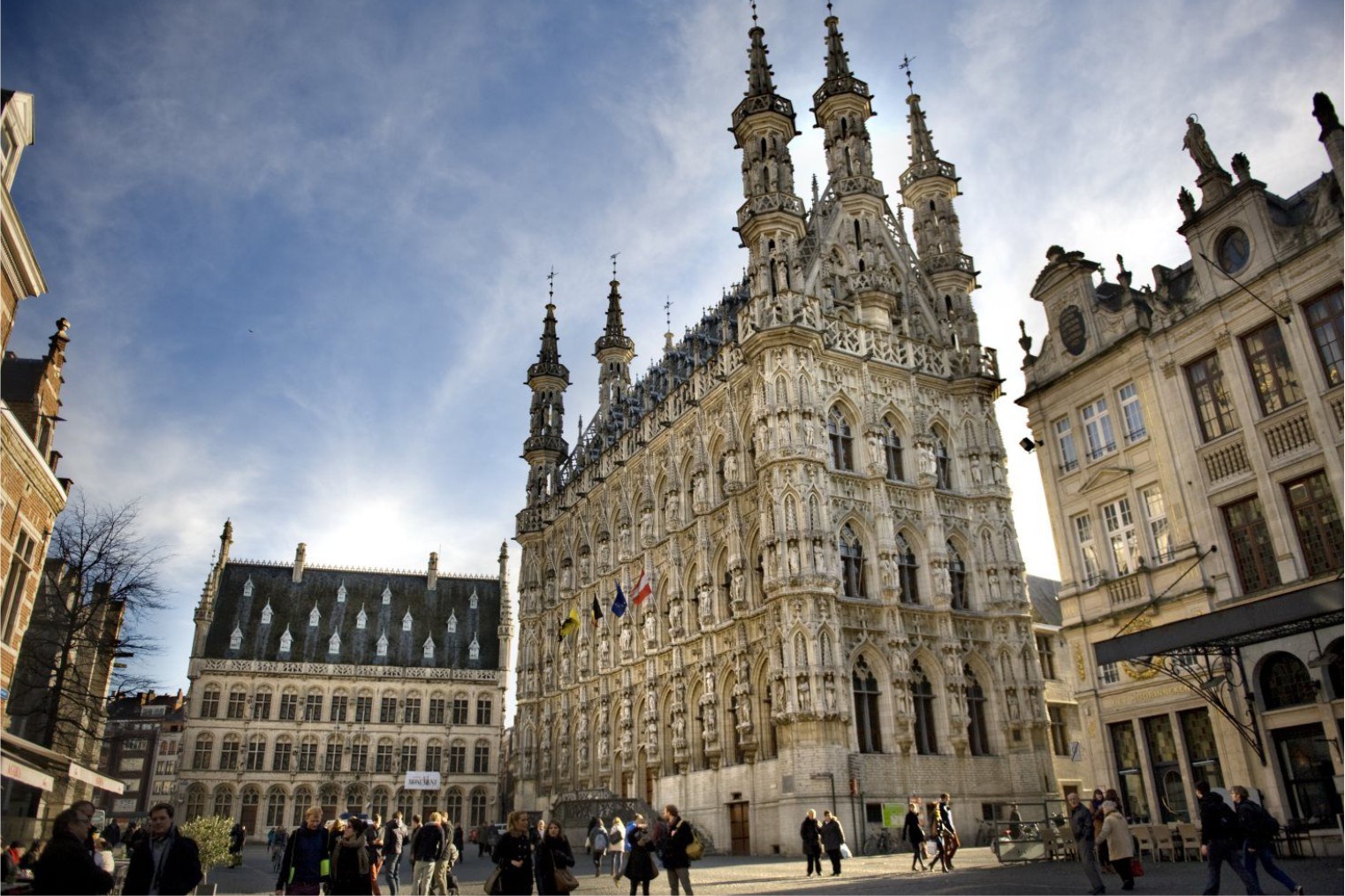 Leuven (map) is the capital and largest city of the province of Flemish Brabant. The university that was founded in 1425 and has more than 40,000 students is the oldest Catholic university in the world. The historic centre is one of the most beautiful in Belgium.

Leuven has a very central location in Flanders, which makes it the ideal starting point to discover the other parts of the nation: Brussels is practically just around the corner, the coast is only a 1½-hour train ride away and Antwerp, Bruges, Ghent, Liège, Mechelen and Hasselt are nearby.

The city has a long and interesting history, being founded probably in the 9th century. Leuven has two UNESCO World Heritage Sites, the Groot Begijnhof (Grand Beguinage, map) is part of the Flemish Beguinages. The Belfry on St Peter’s Church (map) is a part of the Belfries of Belgium and France.

Within the city and its immediate surroundings, most distances can be covered on foot or with a bicycle. Several streets are off-limits to vehicle traffic and, within the city centre, road speed regulations prescribe 30 km/h (19 mph) as the maximum speed limit, making it a pedestrian and bicycle-friendly city.

In September 2009, the M – Museum Leuven (map). It is a museum for both contemporary and historical art, located near het Ladeuzeplein.

The Town Hall (map), built between 1439 and 1463 by Sulpitius van Vorst, Jan II Keldermans, and following their death, Matheus de Layens, in a Brabantian late-Gothic style. In the 19th century, 236 statues were added to the exterior, each representing a prominent local scholar, artist or noble from the city’s history. The reception hall dates from 1750.

Arenberg Castle (map) was originally built in 16th century in the Renaissance style and was extensively renovated in the Neogothic style in the 19th century. It is open to the public. It has a beautiful green park outside with gardens.

Visit the Jaarmarkt (Year Market) the first Monday of September: The entire city centre is transformed into one big market. Cattle is also sold in the streets surrounding the Sint-Jacobsplein, 500 m from the Grote Markt, which is quite the spectacle. Schools in Leuven are closed for this occasion, so expect a lot of visitors.

Look for cheaper restaurants on the Oude Markt (Old Market, map) as that’s where the student population mostly enjoys their meal. It has many smaller restaurants and bars (the Old Market is sometimes called the longest bar in Europe), but all of them stop serving food after 22:00.

RAIL >   Leuven Railway Station (map) is one of the busiest of Belgium. There are frequent direct trains from: Brussels Airport (13 minutes) / Mechelen (20 minutes) / Lier and Antwerp (50 minutes) / Ghent (1 hour) and Bruges (1 hour 20 minutes).