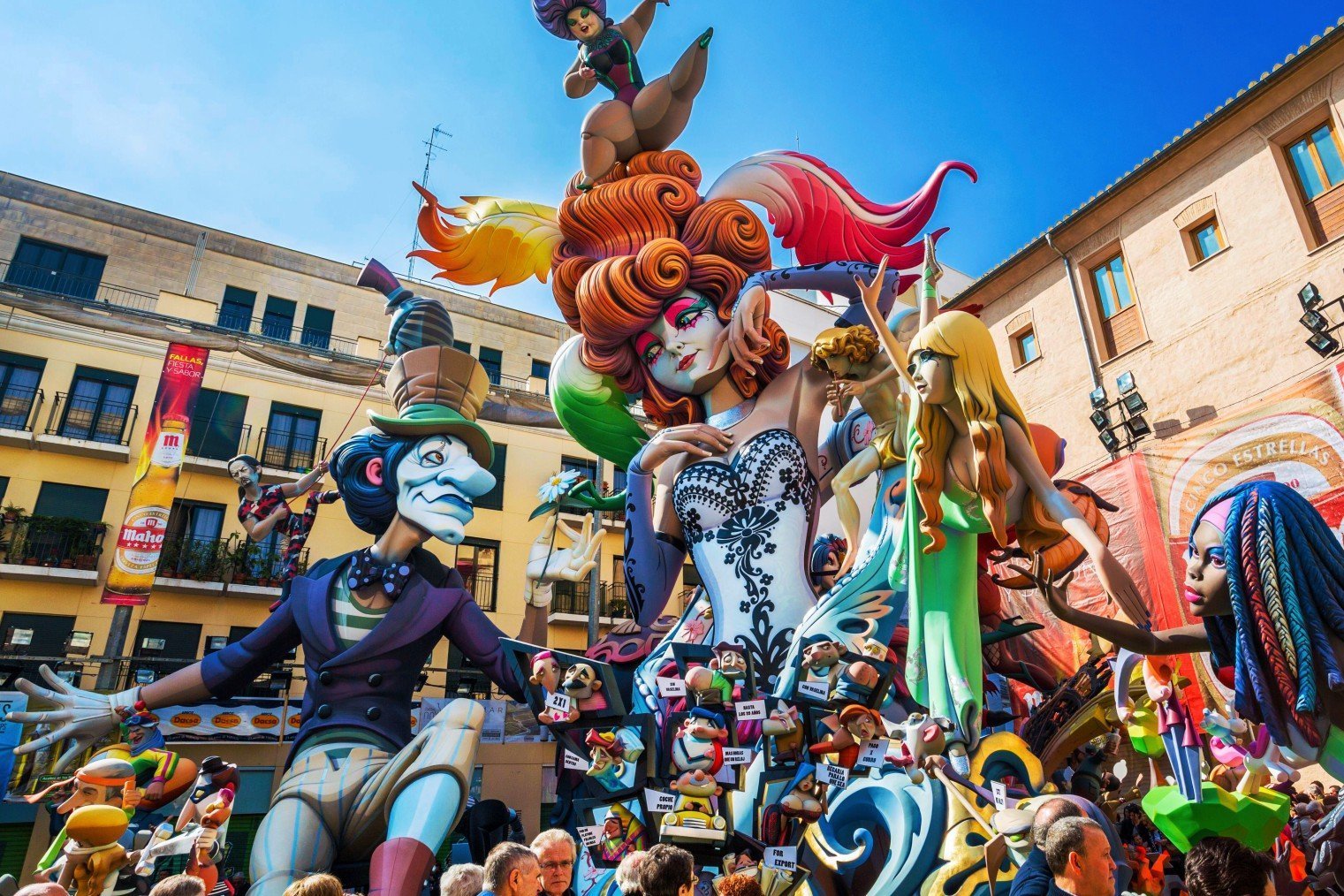 The Falles is a traditional celebration held annually in commemoration of Saint Joseph in the city of Valencia.

The five main days celebrated are from 15 to 19 March, while the Mascletà, a pyrotechnic spectacle of firecracker detonation and fireworks display, takes place every day from 1 to 19 March. The term Falles refers to both the celebration and the monuments burnt during the celebration.

A number of towns in the Valencian Community have similar celebrations inspired by the original Falles de València celebration. The Falles festival was added to UNESCO’s intangible cultural heritage of humanity list.

Each neighbourhood of the city has an organised group of people, the Casal faller, that works all year long holding fundraising parties and dinners, usually featuring the noted dish *paella, a specialty of the region. Each casal faller produces a construction known as a falla which is eventually burned.

In modern times, the two-week-long festival has spawned a substantial local industry, to the point that an entire suburban area has been designated the Ciutat fallera (Falles City). Here, crews of artists and artisans, sculptors, painters, and other craftsmen, all spend months producing elaborate constructions of paper and wax, wood and polystyrene foam tableaux towering up to five stories, composed of fanciful figures, often caricatures, in provocative poses arranged in a gravity-defying manner.

There are about 750 of these neighbourhood associations in Valencia, with over 200,000 members, or a quarter of the city’s population.

The five days and nights of Falles might be described as a continuous street party. There are a multitude of processions: historical, religious, and comedic. Crowds in the restaurants spill out into the streets. Explosions can be heard all day long and sporadically through the night.

Each day of Falles begins at 8:00 am with La Despertà (“the wake-up call”). Brass bands appear from the casals and begin to march down every street playing lively music.

The Mascletà, an explosive barrage of coordinated firecracker and fireworks displays, takes place at 2:00 pm every day of the festival; the main event is the municipal Mascletà in the Plaça de l’Ajuntament (map) where the pyrotechnicians compete for the honour of providing the final Mascletà of the festes (on 19 March).

Cavalcada del Foc. On the final evening of Falles, at 7:00 pm on 19 March, a parade known in Valencian as the Cavalcada del Foc (the Fire Parade) takes place along Colon street and Porta de la Mar square (map). This spectacular celebration of fire, the symbol of the fiesta’s spirit, is the grand finale of Falles and a colourful, noisy event featuring exhibitions of the varied rites and displays from around the world which use fire.

La Cremà. On the final night of Falles, around midnight on 19 March, these falles are burnt as huge bonfires. This is known as La Cremà (the Burning), the climax of the whole event, and the reason why the constructions are called falles (“torches”).

CityMapper – Valencia | The ultimate transport app and technology for mobility in cities.