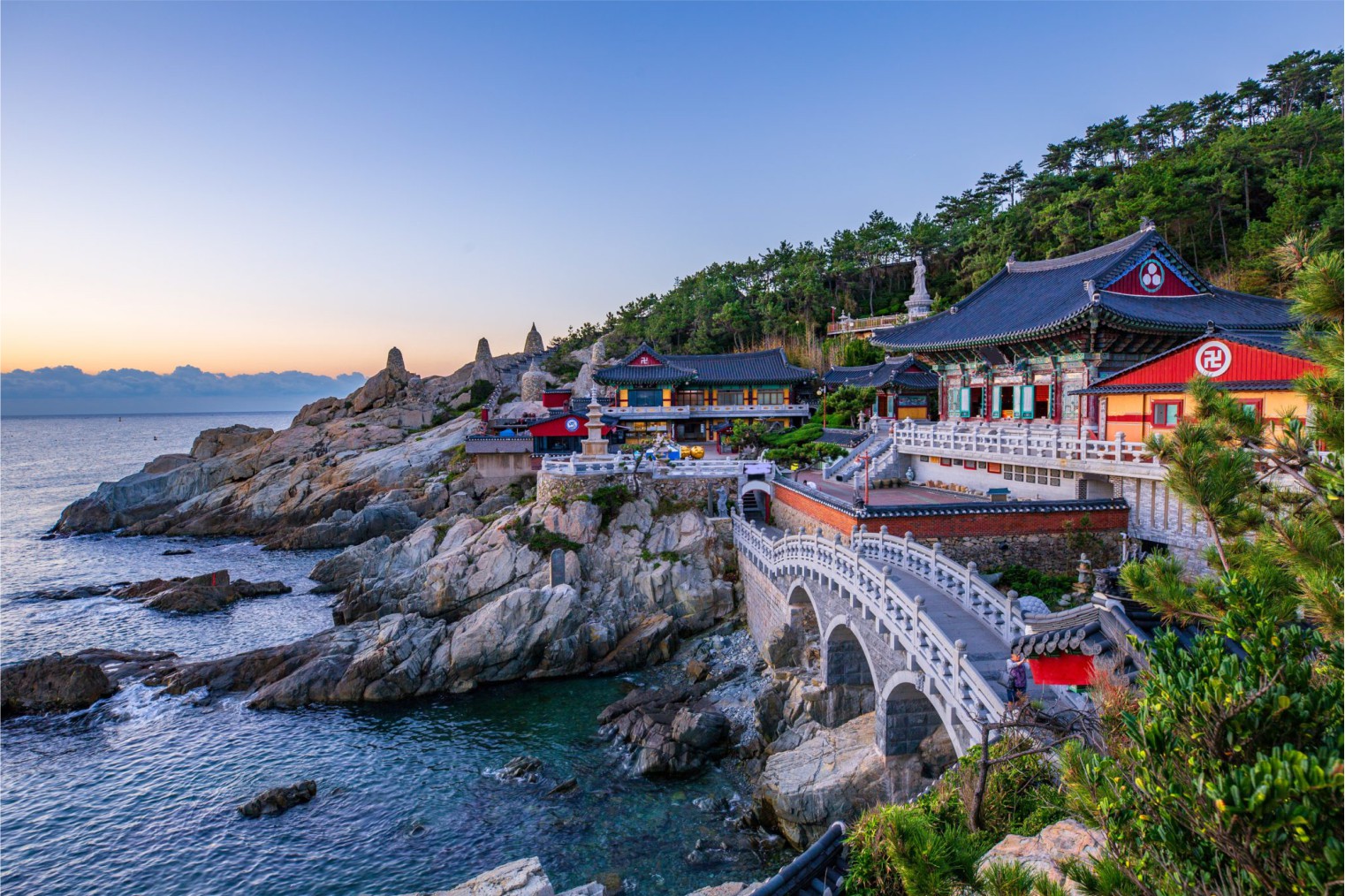 Republic of Korea is a country in East Asia. Half of the country’s population of over 51 million people live in the Seoul Capital Area, the fifth-largest metropolitan area in the world. South Korea shares its traditional culture with North Korea, but the two Koreas have developed distinct contemporary forms of culture since the peninsula was divided in 1945.

Popular tourist destinations outside of Seoul include the major coastal city of Busan (map), the Seorak-san national park (map), the historic city of *Gyeongju (map) and subtropical *Jeju Island. *Andong (map) — historically rich in Confucius traditions and home of living folk village. *Yeosu (map) — one of the country’s most picturesque port cities especially at night. Famous for its seafood and beaches, you can visit some of the islands in *Hallyeo Ocean Park.

Seoul (map). Most journeys begin in the nation’s capital that never sleeps. This ancient place has seen centuries and wars come and go but seems to have come out stronger than ever. Popularly called the “Miracle on the Han River”, it’s one of the largest metropolitan economies in the world.

Busan (map) is the country’s second city and most significant port. Called the nation’s summer capital, Koreans flock to this city’s fine beaches, seafood restaurants and festivals. Haeundae beach (해운대, map) in Busan is the most famous in the country, with an atmosphere is comparable to southern France or California in the summer.

*Bukhansan (map) is just a stone’s throw north of Seoul and one of the most visited national parks in the world. Some 836 meters high, Mount Bukhansan is a major landmark visible from large parts of the city and the park is home to the beautiful Bukhansanseong Fortress. The popular hike to get up there is well worth it, as you’ll be rewarded with great views of the metropolis.

*Gochang, Hwasun and Ganghwa Dolmen Sites is a World Heritage and home to a significant part of all the dolmen in the world. Apart from the impressive megalithic stones, it has brought forward a highly important collection of archaeological finds.

Folk villages. If you’d like to see a bit of Korean folklore, Hahoe Folk Village (map) near Andong, Yangdong, the living museum-like Korean Folk Village in Yongin (map) or Hanok Village in Jeonju (map) are among the best.

Hiking. With the country being covered in mountains, Korea is a fantastic destination with numerous hiking opportunities. Try Jirisan (지리산), *Seoraksan (설악산) or go to South Korea’s highest peak, the extinct volcano *Hallasan on Jeju island. (+ An Ultimate Bucket List for Hiking in South Korea / lifeofbrit.com)

South Korea is fairly compact, and you can get almost anywhere very fast by train.

Google Maps does not give driving or walking directions in South Korea. The most common software used by locals are Naver Map and KakaoMap.

Seoul’s public transportation smart card is known as T-money card. This can be used on many local buses and subways throughout the country and some taxis.

BUS >   Buses (버스 beoseu) remain the main mode of national transport, connecting all cities and towns. The Korean Express Bus Lines Association have timetables and fares of the Express bus routes in South Korea on their website.

WATERWAYS >   The services listed here may change frequently, and English language websites may not be updated with the current information. Verify before traveling.

Incheon’s International Ferry Terminal (map) has services from several cities in China, such as Weihai, Dandong, Qingdao and Tianjin. The largest operator is Jinchon, but Incheon Port has full listings on their website.