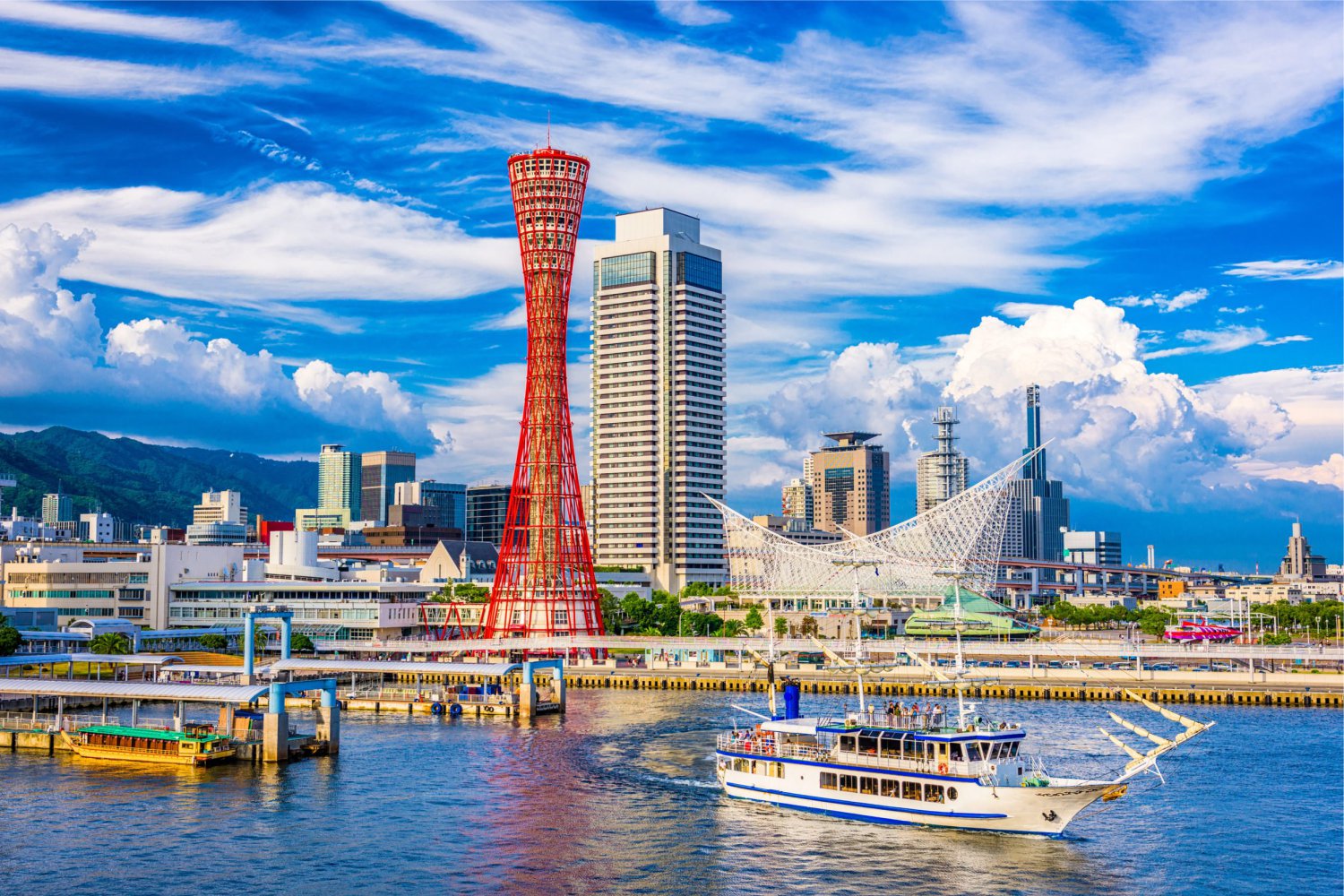 Kobe (map) is the capital city of Hyōgo Prefecture, about 30 km (19 mi) west of Osaka. Together with Kyoto and Osaka, it makes up the three-city agglomeration of Keihanshin (京阪神), Japan’s largest after greater Tokyo.

A port in what would become Kōbe was established as a concession to western powers in 1868, during the time when Japan was opening to the world. Nagasaki and Yokohama had already begun serving foreign ships nine years earlier.

The landmark of the port area is the red steel Port Tower (map). A ferris wheel sits in nearby Harborland (神戸ハーバーランド), a notable tourist promenade.

Kobe is most famous for its *Kobe beef (Hyōgo Prefecture) and Arima Onsen (map). Arima Onsen in Hyogo Prefecture is said to be the oldest onsen (hot springs) town in Japan, with a history that dates back more than 1,000 years. You can enjoy a day trip there, but you can fully experience the charms of Arima if you stay one or two nights.

Chinatown (南京町, Nankin-machi, map). The original settlement of Chinese merchants. Today, it is rather touristy though it offers some “Japanised” versions of Chinese food such as pork buns (豚饅頭 buta-manjū). Its architecture is still rather pleasant though.

Tetsujin 28 statue / Gigantor (Kobe project, map). A 18-meter-tall statue of a manga robot that was built to help rebuild the Nagata ward of Kobe both financially and morally after the great earthquake.

Kōbe is a well-known center of sake production and many sake breweries are in the Nada (灘) area and have tours or museums open to the public. You can pick up a map of the sake breweries at the tourist information office (map) in Sannomiya.

Kobe has several ropeways that travel up Mount Rokko. One that is near a major station is the Shin-Kobe Ropeway (map), a 5-minute walk from Shin-Kobe station (map). The ropeway, reputed to have one of Kobe’s best scenic views, runs up to the Nunobiki Herb Park.

The automated Port Liner links Sannomiya (kobestation.com) to the reclaimed port district south of the city, and continues over the Kobe Sky Bridge to Kobe Airport.

RAIL >   The nearest station on Japan’s high-speed shinkansen network is at Shin-Kobe station (map). From Tokyo station, Shin-Kobe is 2 hours, 50 minutes away via Nozomi. The Hankyu (阪急), Hanshin (阪神) and JR lines cross Kōbe in a west-east direction, and provide the cheapest and fastest way to travel across town. Each of these three lines have their own station located around the busy central Sannomiya shopping district (map) and each provide access to different points of interest.