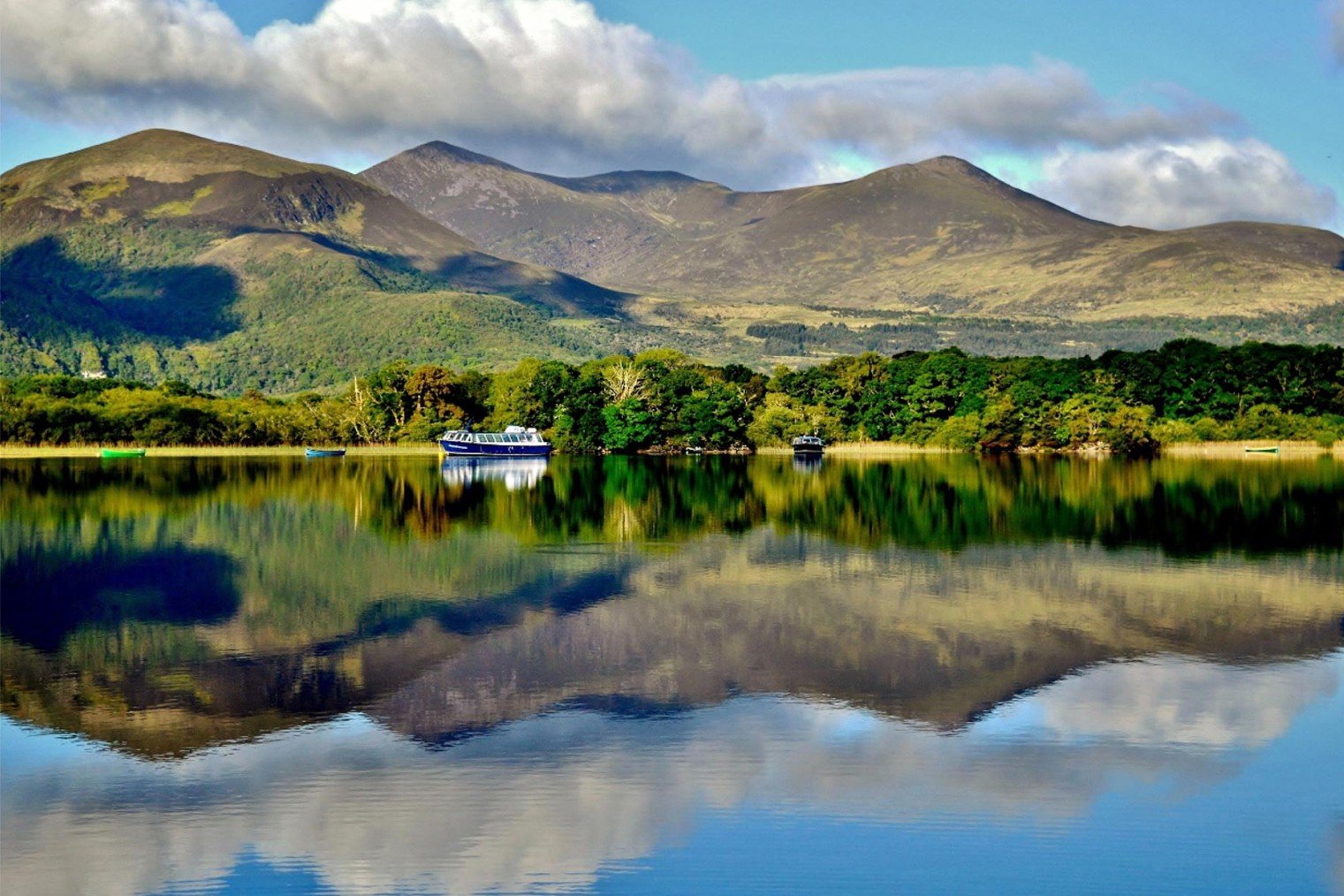 Killarney (map) is a town in County Kerry in southwest Ireland. It has a resident population of 14,504 (as of 2016) but in summer they’re outnumbered by tourists, because this is one of the most scenic areas of Ireland, firmly on the tourist circuit for over 150 years.

Its lakes command great views of Ireland’s highest mountains, and the landscape is protected as Killarney National Park. It’s the usual starting point for the *Ring of Kerry, the 214 km circuit along the coast of Iveragh Peninsula.

Killarney won the Best Kept Town award in 2007, in a cross-border competition jointly organised by the Department of the Environment and the Northern Ireland Amenity Council. In 2011, it was named Ireland’s tidiest town and the cleanest town in the country by Irish Business Against Litter.

Ring of Kerry by car can easily be done in a day. If as suggested you go clockwise against the buses, the first stretch is over Moll’s Gap to Kenmare. But if you decide to follow them, take N72 west via Aghadoe to Killorglin, where the main attraction is Kerry Bog Village (map).

Franciscan Friary (map) on Fair Hill north side of the centre remains active. It’s a hefty building of 1860, founded by Belgian friars, and you can attend church services to see the ornate altarpiece and stained glass windows.

Muckross Abbey (map). The first monastery was founded in the 6th century, but the ruins you see now are of the Franciscan friary of 1448. The ruin is roofless but extensive; a striking central courtyard has a yew tree and cloisters. The graveyard remains in use. Free.

Muckross House, Gardens and Traditional Farms (map). Grand mansion built in 1843 in Tudor style. Two sideshows have outgrown the original attraction: “Muckross Traditional Farms” are an outdoor museum of farm life in Kerry in the 1930s, with demonstration of country crafts and cutesy animals for children to pet. There’s also a large clothing and pottery retail outlet.

Torc Waterfall (map) is the 110 m cascade of the Owengarriff River – it descends 20 m but not in a clean drop. There are several walking trails, and after you’ve slogged up them for a while, you’ll probably guess how the “Cardiac Steps” got their name.

Ladies View (map) is a viewpoint on N71 climbing out of Killarney towards Kenmare.

Gap of Dunloe (map) is a scenic mountain gorge west of the lough, created when a glacier broke through and bruised its way north. The lane traversing the gorge is a public road so you may drive it, but it’s very narrow, and cars come into conflict with other cars, bikes, more cars, pony carts and yet more cars.

Killarney Outlet Centre (map) is a large indoor mall north side of the railway and bus stations. There’s a retail park east edge of town, with Tesco and Aldi.

AIRPORTS >   Kerry Airport. You might prefer to fly into Dublin, which has a much greater range of flights and onward transport, or into Shannon two hours drive away. Dublin Airport (10 km north of city centre). Dublin Airport has an extensive short and medium haul network.

List of museums in the Republic of Ireland (wiki)

List of national parks of the Republic of Ireland (wiki)